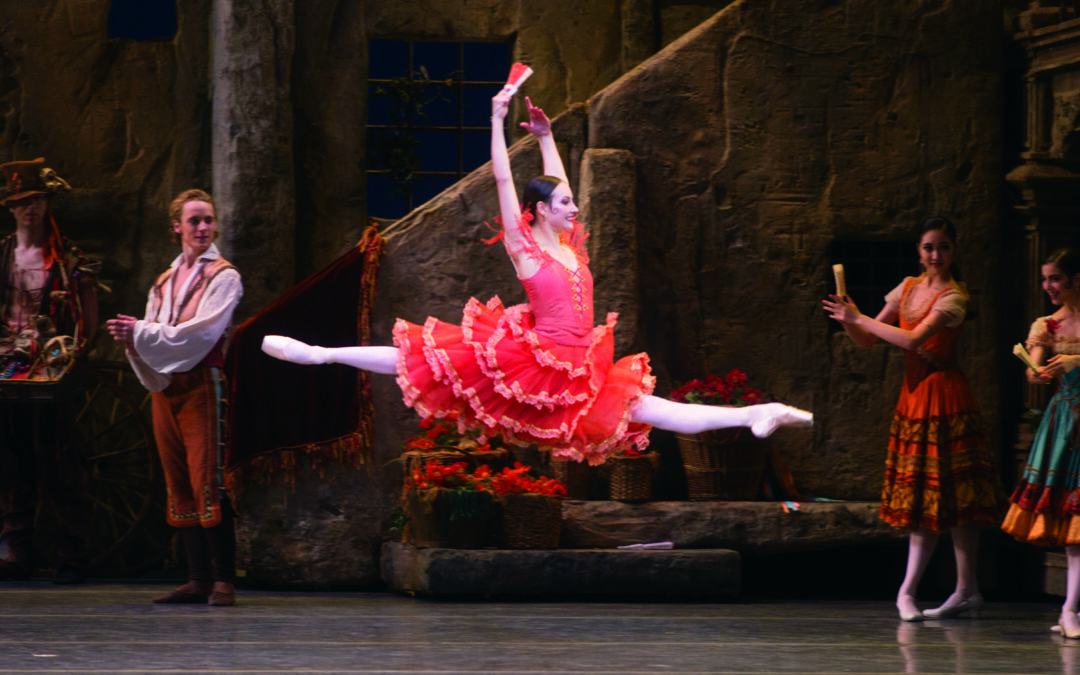 The elderly knight-errant Don Quixote comes out a winner in his namesake ballet, which the American Ballet Theatre is performing at Norfolk’s Chrysler Hall March 25-27, under the Virginia Arts Festival’s auspices.

Though he doesn’t vanquish the windmills, Don Quixote does help others conquer a different foe, a more familiar, more stubborn and probably more fearsome one: parental disapproval, roughly blocking the course of true love.

This sparks a series of pursuits and encounters involving woods and taverns and gypsies and a puppet theater and a conveniently encountered Duke and Duchess and of course, that windmill. (There’s also a dream sequence of wood nymphs and fairies, appearing to Don Q after he’s concussed by that giant with the whirling arms.)

Of course, the Don dreams of Dulcinea, his idealized lady concocted from his obsession with the days of chivalrous knights in shining armor.

“It focuses…on two lovers who he encounters on his way,” said ABT’s Artistic Director Kevin McKenzie, on the phone from his New York office. “He interrupts his quest to see them happy.” The story provides “a vehicle to use that language of ballet to construct pyrotechnical sentences of comic relief, to flesh out all the wildly over the top characters.” The dancing, he added, has “literally a wow factor athletically.”

“Everything is so quick paced. This is really appealing to an American audience. [What’s] important to this particular production is the good natured, good clean fun. It is the cross section between arts and entertainment.”

This production is “modeled after the one that Mikhail Barishnikov staged,” which, McKenzie said he “had read was Misha’s nod to American Broadway theatre.”

(McKenzie is responsible for the ABT staging. Barishnikov’s staging in turn goes back to the Alexander Gorsky choreographed, three act 1900 Moscow Ballet version, which was an altered revival of an 1871, five act version with libretto and choreography by Marius Petipaa, itself expanded from Petipa’s first, 1869 staging.)

The score, which KcKenzie says “is accessible and has beautiful melodies” – it’s frequently acclaimed as one of the delights of Don Quixote – is by Ludwig Minkus. ”The Santo Loquasto sets and costumes are unbelievably beautiful.”

“Don Q is a lighter, comic ballet, but the intentions of your body language have to be unmistakable. Dancers are great artist athletes. If you have one without the other you do not have the experience of a really world class ballet.”

“It is possible to convey a thought, a whole sentence, to an audience without saying a word. That is, in and of itself, ballet”

““We live in a world that is more and more based on analytics and strategy. Ballet is an art form that bypasses the intellect and speaks  straight to the emotions.”

The term ballet theatre, McKenzie pointed out, “Says something to people who don’t know ballet or who don’t know theatre. Whether you had never seen it or not. you knew what it meant just by the name.”

He expanded: “Theatre is there to challenge your assumptions. Ballet is a highly codified system of body language.”

McKenzie on the company:  “A group of artists who understand the three words of our title. The American, not meaning the nationality of America but the American experiment, the cross cultural ideal of taking an idea and going,‘It doesn’t have to be my idea, it doesn’t have to be your idea, but it has to be the best idea.’ That’s what we are going to pursue. Using ballet as a language and ultimate acknowledging that it is happening in a theater to challenge our assumptions.”

“To go with strangers to a dark theater and agree to suspend disbelief is … giving over to something larger than yourself but it’s very, very ephemeral. And it’s acknowledging that there are some things that live in the mind that are more valuable than the objects that you can put in your pocket and carry home.

“If we have done our job well, the challenge to assumptions is that you will be engaged for two entire hours and not think about anything else and walk away saying, ‘Wow! That is not what I expected.’”