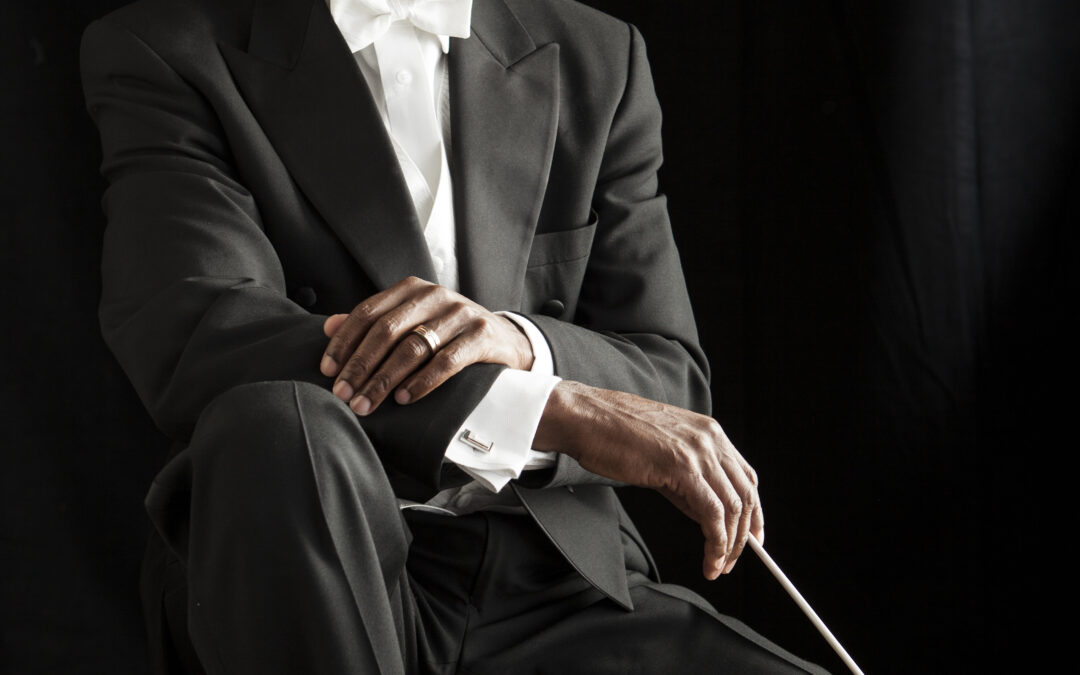 Grand fanfares of orchestral brass herald the arrival of Maestro Thomas Wilkins as the first Principal Guest Conductor in the century long history of the Virginia Symphony Orchestra, February 18-20.

It’s the second half of the concert program, Pyotr Illich Tchaikovsky’s 4th Symphony, that really breaks out the brass artillery of horns, trumpets, trombones and tuba, but the nine minute curtain raiser, contemporary composer James Beckel, Jr.’s Toccata for Orchestra, foreshadows the musical barrage to come.

In between the Beckel and the Tchaikovsky, the VSO will play Jean Sibelius’s Concerto in D minor for Violin & Orchestra, a stunning half hour of instrumental virtuosity and emotional depth that is acknowledged as one of the greatest works for that orchestral rank and file instrument standing forth as heroic soloist.

Wilkins’ professional and personal history deserves fanfares of the highest order. It is arguably one of the great success stories in recent classical music history and beyond, and he’s local.

Born in the heart of Jim Crow days to an impoverished single Black mother in our old Southern port city of Norfolk, the former home of the Commonwealth’s “Massive Resistance” to integrated schools, growing up in a housing project, Wilkins became an internationally recognized orchestral conductor.

Principal conductor of the Hollywood Bowl Orchestra; Boston Symphony Orchestra’s Artistic Advisor, Education and Community Engagement; for 16 years Music Director of the Omaha Symphony; former member of the music faculties of Chicago’s North Park University, University of Tennessee in Chattanooga, and VCU, currently the Henry A. Upper chair of orchestral conducting and professor of music, orchestral conducting at the pre-eminent Jacobs School of Music of Indiana University, he’s also been the guest conductor of a quadruple handful of American symphony orchestras, including all of the “Big 5:” the NY Phil, the Chicago, Philadelphia, Cleveland and Boston orchestras.

His civic and charitable board memberships are almost as numerous as his musical venues.

Wilkins has guest conducted the VSO many times since the 1990’s, but now he has come home to a resident position at the very place, Chrysler Hall, where at 8 years old he fell in love with orchestral music and first dreamed of being a conductor.

The February concerts’ opening piece, Toccata for Orchestra by James Beckel, Jr., is a sprightly, brass forward but deliberately musically egalitarian piece that the composer’s web site describes as “meant to be a miniature concerto for orchestra. From the string quartet to the lyrical flute and clarinet solos in the middle of the work, to the fugue section, every instrument in the orchestra [including piano] has a solo moment somewhere in this piece.” There’s a propulsive, very 20th Century feel to it, akin perhaps to some Bernstein.

Beckel’s work was commissioned in 2007 by a consortium of orchestra: the Indianapolis Symphony Orchestra (where Beckel has been principal trombone since he won the position as a 20 year old undergrad at Jacobs), the Evansville Philharmonic, the Oklahoma City Philharmonic, the Virginia Symphony Orchestra under JoAnn Falletta and the Omaha Symphony under…Thomas Wilkins, Music Director.

Sibelius’ 1905 richly textured, demanding, cathartic and literally awesome violin Concerto will feature Alexi Kenney as the soloist in his Virginia debut.  When the NY Times says, reviewing a February, 2020 concert of Baroque and later works, that a 26 year old musician “made it seem that…this is the only possible way to play this music,” this is an artist to anticipate eagerly, to watch and to remember. ​​

The VSO website says that the program’s post-intermission 1877-78 Tchaikovsky Symphony No. 4, “features some of the most explosive brass and wind moments you’ll ever hear.”

The AllMusic website calls it “extroverted and wild,” and “the prince” of his symphonies, and quotes the composer as writing in an 1878 letter to fellow composer and countryman Sergei Tanayev, “Should a symphony not express those things for which there are not words but which need to be expressed?”

He started working on it during a time of terrible torment. Given to self-doubt – he once wrote that he saw himself as “merely a talented person, but no extraordinary phenomenon” – this was at the same time that his doomed and almost inexplicable marriage to a literally hopelessly adoring female student – he was gay and at least one of his letters hints a submissive as well – had collapsed and he felt that Fate – the European nickname for this Symphony – was against him.

Financial and intellectual support from his enigmatic Platonic patron, the wealthy widow Madame Nadezhda von Meck, apparently revived him monetarily and emotionally, so that he could finish the composition and end it with what AllMusic describes as “a dervish of joy and celebration.” He referred to the 4th Symphony in one of their thousand plus letters as “our symphony,” dedicated it to her, and wrote on it “To my best friend.”