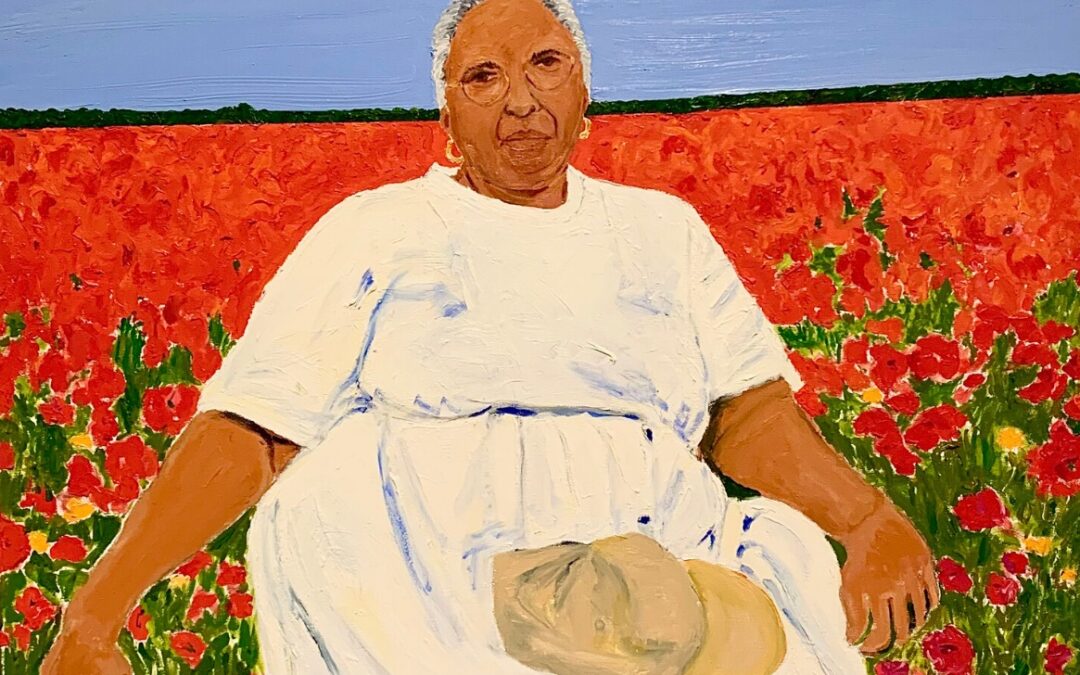 (Cedric Baker’s Aunt Lou won Best of Show for the Made in VA exhibition.)

A trio of new winter exhibitions is arguably Virginia Museum of Contemporary Art’s most captivating in years. Here’s my take on each.

Curated by Alison Byrne, Virginia MOCA’s Deputy Director of Exhibitions and Education, this exhibition presents the work of six artists for whom memory is a driver of their creative output in clay, whether earthenware, porcelain, terracotta, or found objects: Pattie Chalmers, Roberto Lugo, Hollie Lykos, Jiha Moon, Rae Stern, and Ehren Tool.

It has been theorized that memory is a constructive process, that is, that our memories are shaped, at least in part, by what we believe, what we perceive, and what we retrieve.  Each of the bodies of work in this show metaphorically embody, through their diverse approaches to multicomponent formats, the constructive nature of memory.  And as is so often the case with contemporary art, the medium is the message, as Marshall McLuhan famously stated.  Clay, the most malleable of media, “remembers” the touch and pressure that forms it.  It bears witness to the processes that produce it.

Pattie Chalmers’ installation Every Day I Think of You commands the back wall of the Main Gallery.  There, 365 objects sculpted in unglazed terracotta arranged in a monumental oval, read as the artifacts of a life.  Rendered both in relief and three dimensions—to scale and not—all the many objects we associate with a loved one come together in a way in which, as cliché as it might sound, the sum is greater than its parts.  Glasses, a glue gun, and a guitar pick join hundreds of other objects in this anthropological conglomeration of one person’s life mediated by objects, as mundane as they are meaningful.

In the center of the gallery, dozens of pieces of Rae Stern’s chalky white bisqueware sit atop a choreographed hodgepodge of chalky gray furniture in Fugue.  The title refers both to music in which a theme is repeated and to psychiatry in which one loses an attachment to one’s identity.  The ceramic teapots, stacks of cups and saucers, creamers, and sugar bowls speak to a refined life of simple, ritualistic domestic pleasures.  A sign near wipes and gloves discreetly located on an adjacent wall, invites visitors to touch and, in fact, it is in part through viewer interactivity that the installation comes to life. Through programmed lighting and a process known as lithophane in which an image is etched into very thin porcelain and only visible when backlit, pre-WWII sepia-toned photographs intermittently light up on the sides of selected vessels.  The artist culled these images from family photo albums of Holocaust survivors in Kansas City.  As such, the installation suggests at once a warm presence, a ghostly absence, the fragmented compartmentalization of memory, and the role of time.

On a nearby wall, two bodies of work by Hollie Lykos explore the presence of absence by taking a Dremel tool to the decorated surfaces of vintage mass-produced souvenir plates.  In Lady and Gentleman, the silhouettes of early American men and women are Dremel-erased, leaving only their white silhouettes and occasional delicate gouges.  The work is reminiscent, though speaks in its own language, of Barbara Walker, a British artist who uses erasure and embossing to comment on who is seen and remembered from British history.  In this work, Lykos raises intertwined questions about American history and consciousness, gender, and courtship.

Meanwhile, cultures vibrantly clash in the work of Roberto Lugo and Jiha Moon.  Lugo addresses issues of power and privilege in traditional shaped vessels such as teapots adorned with energetic patterns and sensitively drawn portraits of people of color in the news and in his life.  Moon whimsically and humorously investigates the clash of so-called Eastern and Western cultures in brightly colored composite vessels.  And Ehren Tool’s wall of cups seems benign from a distance while, in fact, each one is adorned with an image of war—he was deployed to the Gulf War in 1991 as a Marine—created from stamps he crafts from images he has collected over the years. These images raise complex and complicated feelings and are intended to serve a cathartic and a conversation-starting function.

For 25 years, this annual exhibition was known as New Waves.  In this, its 26th year, it has been renamed Made in VA to underscore MOCA’s commitment to artists of the Commonwealth.  The current iteration features 30 artists, widely spread across the state, selected by guest Juror, Grace Deveney, Associate Curator of Photography and Media at the Art Institute of Chicago.

In content and media, the exhibition is compatibly diverse, as one would expect from a professionally juried show.  Pattern and decoration makes a strong showing in the work of Kay Darling, Lou Haney, Gregory Hennen, and Nikki Painter.  Non-objective and figurative work are both represented, as is photography.  Inspired by Walt Whitman, Robert Schultz’s chlorophyll print and scanography image is especially lush and exquisitely composed.  Entitled Unidentified Union Soldier and Woman in Hosta Leaves, the artist refers to the flora-framed faces as “memorial leaves” through which he reconsiders “the cost of war, face by face.”

John Alan Stock describes his large mixed-media piece as a commentary on the “human failure to act and think responsibly.”  But whether that becomes apparent or not, his composition of imagery—architectural and diagrammatic elements, portraits, pattern pieces, musical scores, text, and Xs that seem to function as cancel motifs—punches many mixed-media and ambiguity buttons, as does Nameless Women by Katherine Prock, albeit for different reasons.  While Stock’s image is bold and assertive, Prock’s quieter composition, like a deconstructed journal, shares some of these same elements, though they are composed more like the bookmaker she is.  Prock’s processes of “cutting, layering, bleaching, dyeing, and stitching” discreet pages together metaphorically undergird her exploration of “family history, domesticity, identity, girlhood, and transformation.”

But it is a pair of blankets—which are not really a pair at all, as they are made by two different artists about two divergent topics—that seem to embody the confluence of material, minimalism, method, and message associated with much contemporary art.  Comfort by Eirene Espinoza and Blanket by Vivian Chiu are simultaneously formal, geometric, organic, tactile, intellectual, and emotive.  And metaphorical thinking—which, in the visual arts, refers to making implicit comparisons between qualities of objects and the ideas they represent—is rewarded by content that is not impenetrable even without knowing specifics, though these are offered in the artist’s statements.

Espinoza’s life-size throw blanket is made of precisely aligned prickly gumballs from a sweetgum tree.  Like these containers for the tree’s seeds, blankets envelop us, becoming a kind of container for our emotions and attempting to provide comfort even when the source of our pain eschews easy solace. In this case, that pain is the death of Espinoza’s father, as the label shares.  Chiu’s large, floor-mounted “blanket” is made of poplar cubes impeccably sewn together with braided string.  It lies on the floor as a testament to labor-intensive processes. As the label attests, the piece is meant, in part, to commemorate her family’s toil in factories along with the catharsis that comes from intensely repetitive work.  But “to blanket” means to cover completely and, in fact, the piece, with it’s one precise ripple, is about visibility and invisibility, in this case, in relation to queer Asian women as Chiu’s artist’s statement reveals.

Wall Text: A Personal Note:  Widespread in the world of art and philosophy is the belief that works of art speak a universal language.  To suggest otherwise is blasphemous in intellectual circles.  Call me a heretic, but I rather believe that art speaks in many languages with some commonalities or universalities.  And for that reason, I highly recommend that visitors to these exhibitions look deeply at the art, certainly, but also read the expanded labels which the staff took considerable time to write and edit.  They are short and succinct, yet they articulate the kind of specific insights into the work that is simply impossible to discern by looking alone.  From my perspective, they are required reading.

Screen breaks, e.g. leaving your cell phone in the car while you visit an art museum, is generally to be applauded.  But, in this case, that would be ill-advised.  One of the most engaging aspects of this exhibition is trying to match the artist’s approach to each of the 12 portraits with the 12 archetypes depicted and checking to see if you are right.  Simply use your phone’s photo app to scan the QR code on the label, and read about the characteristics of the archetype.

Of all the portraits—with their impasto paint application, integrated borders, significant negative space, specific color palettes, and expressive brushstrokes—an especially appealing one turned out to be the “Caregiver.”  Others include Sage, Innocent, Explorer, Ruler, Creator, Magician, Hero, Outlaw, Lover, Jester, and Everyman.  While some of the faces seem perhaps overly stylized, others are less distorted and surreal and more pensive and subtly emotive with ancillary strokes that seem tightly integrated with the portrait.

This hands-on space just keeps getting more stylish, more inventive, more tightly aligned with the exhibitions, and more inventive.  Concepts from the exhibitions are skillfully extracted and translated into thinking and making processes with clear instructions and guaranteed results.  You might find yourself so inspired that you sit down and create a contour line drawing using crayon-and-marker resist…and proudly hang it alongside the eight-year-olds’.