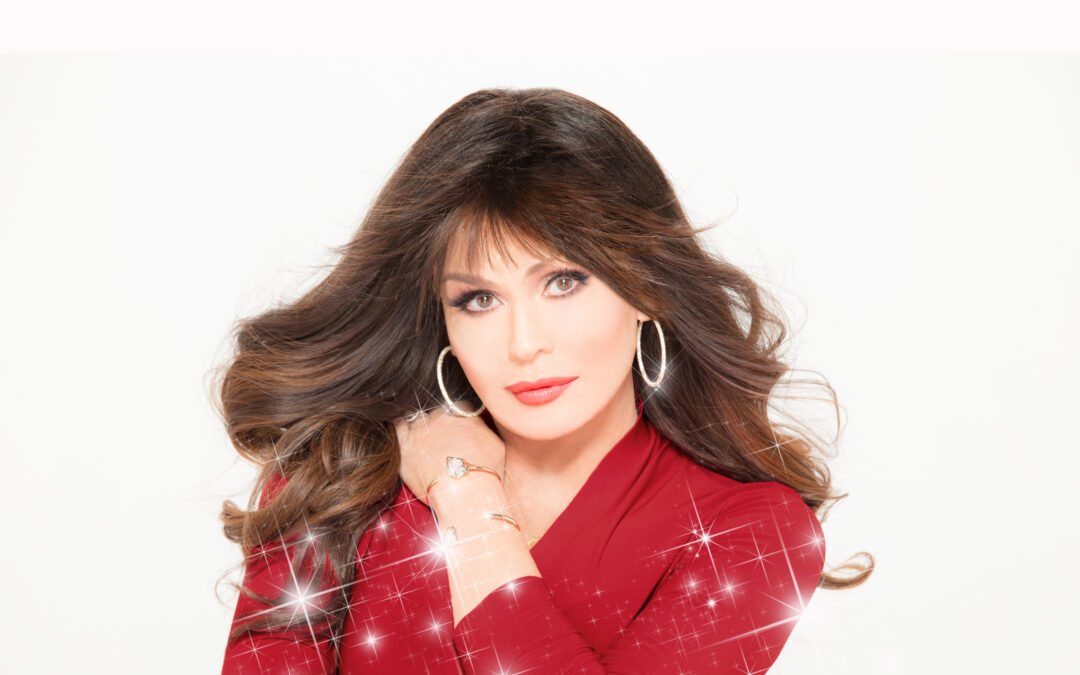 Marie’s older siblings debuted as bubblegum pop group The Osmonds in 1970. Her brother Donny soon after became a teen idol as a solo artist.

Marie Osmond, the second youngest and only daughter in the family, wasn’t far behind on the ladder of success, though forging a different path in the music business.  Her debut single, “Paper Roses,” became a number one hit on the country charts.

On December 10 — just three days before her Christmas concert at Norfolk’s Chrysler Hall — Marie Osmond will release a new album, “Unexpected,” an arrangement of popular classical works as well as Broadway tunes. While she will support the album with a separate tour next year, the Norfolk show will be focused on the holiday theme.

In advance of this performance, I reached Marie Osmond by phone. She put her cell phone on “speaker” mode as she was multi-tasking by getting her hair colored at the same time. Here’s an excerpt from our interview.

VEER: What was Christmas like growing up as a kid in the Osmond household?

Marie Osmond: It was a big deal because we worked most of our time. I don’t ever remember not working.

We would always go home and that was our time just to be with our family and enjoy our traditions.

For me I usually work on everybody else’s holidays. That’s what you do as an entertainer, whether it’s the 4th of July, Valentine’s or Thanksgiving.

So the (Christmas) holiday really started around the 24th for us and went into the New Year, unless we were doing a New Year’s Eve special or something like that.

To me the holiday is family, friends, taking a moment to count your blessings, and just enjoying life, you know? Being grateful.

VEER: You are part of a musical family. Was there music at Christmas when everyone got together where maybe you’d sing around the piano or by the fireplace with guitars?

Marie: Usually by the time we got to the house that was over with because we’d been doing that (on the road).

In this Christmas show that I’m doing we’re going to have a little unplugged set that will kind of show some of the things our family used to have fun doing. It has never been done before. I think it’s going to be really nice.

I have been associated with so many Christmas shows through the years. I guess being the only girl, Jeff, I was the one that was always invited to do everybody else’s Christmas shows, like Perry Como and Bob Hope. They didn’t want my brothers; they wanted the girl. So for me it was going overseas to entertain the troops.

But that harmony that my family had is still very unique. My brothers had a very unique blend and I’ve still not heard to duplicated. Maybe it’s that sibling thing.

VEER: What were those early years like in your career when your debut single, “Paper Roses,” became a number one hit, and then becoming a teenaged TV star with the “Donny & Marie” show?

Marie: Being the only girl in a family of brothers….they were successful. I started entertaining when I was three years old. I was introduced as the youngest Osmond Brother on the Andy Williams Show.

I did commercials in Japan and Sweden. I sang with my family. I was introduced and then I would sing.

It wasn’t until I was 11 that my mom…she goes, “Do you want to do this? You have a very strong voice that’s different from your brothers.”

So she was the one who encouraged me to go to Nashville. And, my father. My parents were very supportive of their children.

I remember going to Nashville. Sonny James was there; he was a massive country star. And next to me were The Jordanaires, who had sung on all the Elvis songs. Everything (in the studio) was done live — the strings, the guitars, everything. Maybe it left an indelible thing in me.

It really kind of blew my mind that “Paper Roses” went to number one across multiple charts. We were in Paris. My father said, “Go buy some clothes. ”

The first time I sang it live was at Madison Square Garden. It was one of those life changing things. I decided if I’m going to do it I have to work hard. You can’t live off the laurels of your siblings.

I had country hits with “Who’s Sorry Now” and “In My Little Corner of the World,” and then it was, like, oh brother and sister. Donny was having hits. Then we did a show with Mike Douglas we co-hosted for a week, and that’s where Fred Silverman, who was head of ABC television, saw us. And that’s how “Donny & Marie” started.

We did an album together just for fun and that’s where “A Little Bit Country, A Little Bit Rock ’n Roll” was created — on that first show. And it was a big show for a 14-year-old girl.

VEER: What can you share about the songs you recorded for your new album, “Unexpected”? Will you perform any of these during your Christmas show?

Marie: First of all the (“Unexpected”) show is different. It goes back to my roots.

I was born on my dad’s birthday. And every year he would take me to the music store and let me purchase a vinyl LP that I wanted. It was our tradition.

You’d think I would buy country or pop, but I always bought symphonic music or Broadway. I loved the stories.

There’s a song on this album called “Song to the Moon” and it’s very odd. I translated it from a Czech song into English and I sang it in very low register. It’s supposed to be done in high soprano.

This album is very esoteric. I’m not sure if I’m going to do any more recording after this, but I wanted to go out and do a show where people could hear a live orchestra. The days of Barbara Streisand and Bernadette Peters, who I love, they’re not doing that anymore.

My Symphonic Christmas show will have a lot of elements that will bring warm and fuzzies to people’s hearts.

I believe we’ve had so much fear and chaos these last several years that I wanted to go out and do a show that would bring back wonderful memories. To me the greatest things I remember about the holidays are experiences with people I love. So to go out to a show to hear music, to laugh and cry, to feel the emotion that music evokes…after this show you will remember it.