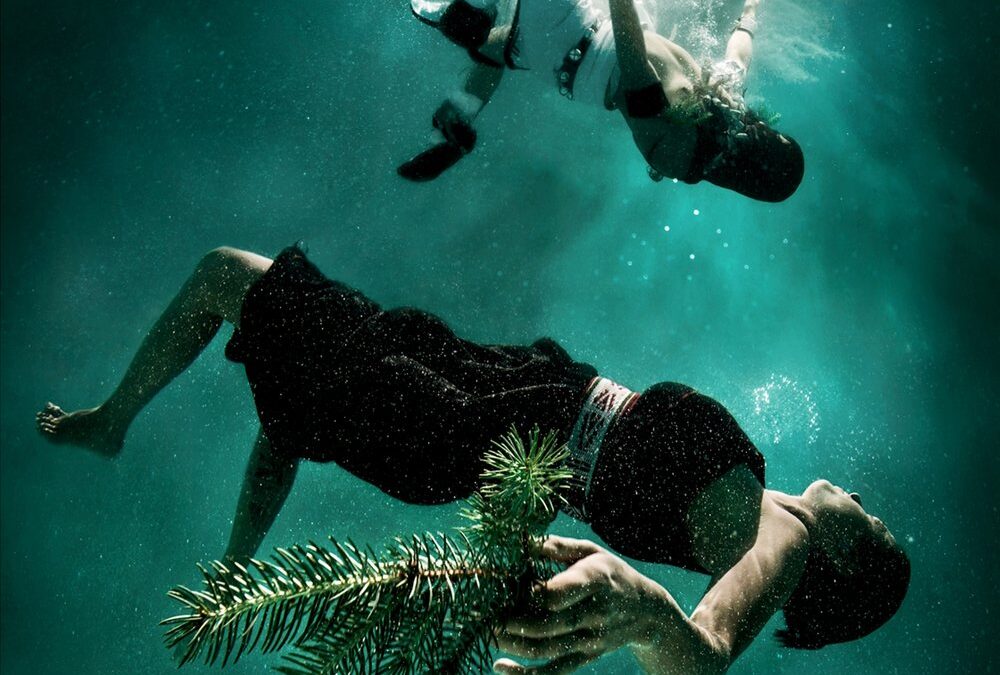 If you think you know Native American art, think again.

“Shared Ideologies,” a fascinating look at contemporary work created by indigenous artists, moves the conversation forward by creatively addressing current issues and the future journey everyone on the planet is on together.

The exhibition, timed in part to be shown during Virginia’s official Native American Heritage Month, includes the works of Cara Romero, Diego Romero, Emmi Whitehorse, T.C. Cannon, and many others.

To learn more, I reached out to the College of William & Mary’s Dr. Danielle Moretti-Langholtz, a preeminent scholar with the titles of Thomasina E. Jordan Director of the American Indian Resource Center, Administrator for the Native Studies Minor, Senior Lecturer in Department of Anthropology, and Curator of Native American Art at Muscarelle Museum of Art.

VEER: There were several Native American tribes, including the Nottoway, Pamunkey, Mattaponi, Chickahominy, Monacan, Nansemond and Rappahannock,  who lived and thrived in Coastal Virginia before the arrival of the Spanish and English. Do we know how the various tribes interacted? Was there a dominant tribe?

Danielle Moretti-Langholtz: We’re talking about a long span of time so I don’t think I can say this group is dominant or that, but I would say we can identify Algonquian speakers, Iroquoian speakers, and Siouan to the western part of what today is Virginia.

We’re trying to understand archeologically when they moved into this region and identify them by archeological signatures at sites. So that’s something that’s pretty complex.

There is good evidence that the groups today that are both federally and state recognized have links to those communities and we can see that they are related to those linguistic groups. But they’re fairly modern people since colonization now has been underway for  more than four centuries.

VEER: Do the native peoples of our region have a perspective of history that dramatically differs from what most kids are taught in public schools?

DML: I think, Jeff, that’s emerging now as work towards decolonization of history and reframing those times. Both native voices and scholars at universities, particularly in Virginia and particularly at William & Mary, are in fact trying to do that.

My work with Buck Woodard is trying to do that with ten years of research on both sides of the Atlantic. This doesn’t happen over night. It happens with going back, even though those sources are written by the English, looking at them with a new set of glasses and talking with living people, and also combining that with what we know with linguistics and archeology.

VEER: Do you fear that so much history that may have been orally handed down is lost in time?

DML: All history of everybody’s has been lost over time.

My interest is not just past-looking, it’s forward-looking; and how we reconnect with living communities and bring forward what they have retained and what we all share in this region and in the United States with our history. So I’m not just looking backwards.

VEER: And looking forward is your mission with “Shared Ideologies.”

In fact the artists in the exhibit specifically use their art to address the fact that they want to look post the 1960s and all the social unrest at that time due to Vietnam.

They felt — particularly T.C. Cannon and Jaune Quick-to-See Smith — that they didn’t want to paint Bambi art — what non-natives were expecting: somebody on horseback with a bow and arrow dressed in fringed leather with feathers.

They said, “That’s not where we are today. We want to paint our experience and our perspective of history.”

That’s what “Shared Ideologies” is all about.

VEER: Do you think current social upheaval in the country presents a good opportunity for Native Americans to step back onto the national stage for dialogue on the past and a way forward?

DML: I want to think about the way to respond to this very complex question.

“Shared Ideologies” is about that political aspect, but the American Indian Movement that emerged addressing the kind of things you’re talking about.

I don’t think the current movement is new. I would say it is yet another opportunity to look back. But if we only stay looking back we’re not going to build a better future.

The native artists in “Shared Ideologies” are about building a better future. Their work also addresses present day issues that impact all of us — environmental justice issues, in particular.

I think that is pretty telling. They’ve moved beyond just what happened when the Spanish came and the English came. They’re in a place where they say we all need to look at the problems we have, and maybe native people have a particular perspective or some indigenous knowledge bout the landscape or want to say our traditional spaces are being compromised due to pollution and development.

These are issues for all of us and that, I think, was really a compelling message I received from these native artists.

I have statements of every artist in the show that addresses some of these things.

VEER: Among the contemporary Native American artists you feature in the exhibition is digital photographer Cara Romero. She is Chemeheuvi, a Southern California tribe. The Muscarelle Museum has acquired her work titled “Water Memory” to its permanent collection. One of her most intriguing works, to me, is “The Last Indian Market,” which is seemingly an interesting take on Leonardo da Vinci’s “The Last Supper” painting. Can you discuss her works?

DML: I thought the same, but actually it isn’t.

She spent the last week with me and spoke to our students. There was a question about that piece and she said, “It really isn’t. It was more for the people at that table.” They were talking internal politics of the Wyeth’s Southwest Indian Art Market organization.

It reads like that to the rest of us, but she had a different intent for it. I was surprised to hear her say everybody around that table had a particular issue that had to do with native art.

She is an amazing digital photographer. We also have “Oil Memory” in the exhibit as well as “TV Indians” that I created a video that deconstructs her” TV Indians,” which deals with stereotypes.

I think the beauty of art is we can engage in these conversations by looking at what someone has created.

VEER: Interesting that you discuss some of the stereotypical images are in some cases beloved by native people. I recently drove through a town called Shiprock on the Navajo Reservation in New Mexico and noticed the mascot of the high school was an Indian in full headdress. They were obviously proud of the image.

I think we have gotten to this space where non-natives are more sensitive to these issues. But within that space there appears to be a place where tribal people want to say this is how we would like to use the image. We can’t reconcile it easily.

My mentor, the late Thomasina Jordan, used to worry about this issue. She said, “If we erase everything we’ll truly be forgotten. We have to work with native people to see what we keep.”

VEER: For those who travel to the American West, Native American art and culture is widely available for purchase in the forms of pottery, rugs, blankets, dolls, and jewelry. Eastern tribes, to me, do not seem to have the same visibility of art or culture. Were items such as jewelry and pottery not as relevant to the Eastern Chickahominy as to, say, the Navajo in Arizona/New Mexico?

I’ll start first with Navajo. The creation of Navajo rugs, jewelry and everything was fueled by tourists going out there. There are many books about this, including the evolution of the designs on the rugs, which is something I’ve studied in the past.

I was in Santa Fe many times interviewing people and really trying to get a better handle on tourism and people going to the Grand Canyon, and how that changed artwork. Navajo Nation went from purely subsistence to slowly becoming a cash economy.

Now, I don’t want to say there wasn’t that level of artwork but the four centuries of colonization here — we’re talking about people who were horticulturalists who made pottery — there are still artists among these communities here.

Even in Santa Fe and what you interpreted very reasonably as “The Last Supper,” really deals with who is controlling the market.

You go to the Santa Fe market, which I have gone to numerous times and with students, thousands of people show up: collectors, museum directors from this country and around the world.

Often times the art is not made in New Mexico. Much of it is made in Oklahoma, and then either travels through galleries or people bringing it because you get a better price in Santa Fe. You can buy those things in Oklahoma at a much lower price.

This is something I have observed for the last 30 years. It is a major art market the way New York is an art market, London. There is a Hispanic art market in Santa Fe in April and a Native one the third weekend in August.

That dictates the prices of things. You see the galleries (in Santa Fe) on Canyon Road. That is a controlled space. The art isn’t coming just from reservations there. It’s coming from around country by native artists.

In Santa Fe, you have the establishment of the Institute of American Indian Art. You have the first school in which the instructors are taught by native people. That really pulls art in another direction and that’s what “Shared Ideologies” is all about.