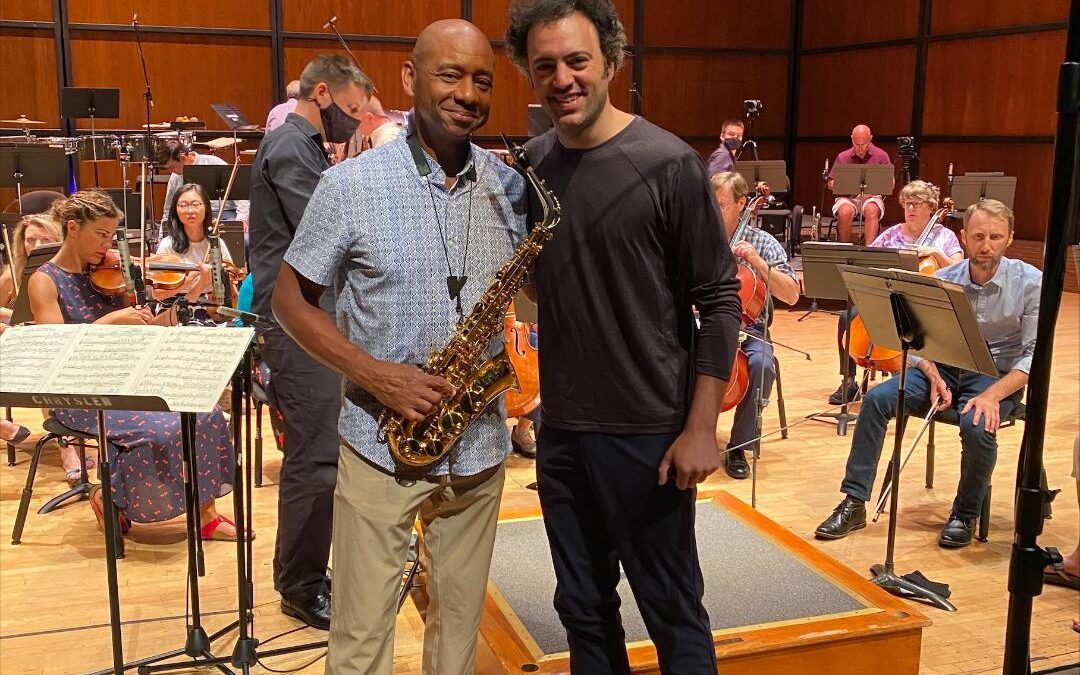 Virginia Symphony’s Music Director Eric Jacobsen kicks off the conducting part of his new job with an overture by one of the greatest composers of the traditional Classical repertoire, followed by a song from a late 19th Century, standard-rep symphony that here substitutes alto sax for alto vocalist, which leads into a late 20th Century work that brings the saxophone virtuoso back to the stage, where he remains for another song recast as a vehicle for Antoine-Joseph (Adolphe) Sax’s brass invention. It all wraps up with one of the greatest symphonies ever, and a CD of the concerts is in the works as well.

There’s an almost frantically eager quality of anticipation to Mozart’s brief Overture to Le nozze di Figaro (The Marriage [or Wedding Day] of Figaro) that prophecies something really special just right around the corner, in the rest of the concert and in the Orchestra’s years to come.

Mahler’s song Urlicht (“Primal Light”) brings on sax star Branford Marsalis, whose alto sax will play the part of the vocalist. He’s one of that notable dynasty of multi-talented musicians: the late pianist and educator father Ellis, younger brothers Delfeayo (trombone) and Jason (drums), and of course Wynton, eldest of Branford’s siblings, famously a trumpeter and a composer, whose Concerto for Tuba and Orchestra had its first public preview here just a few weeks ago.

Mahler first conceived Urlicht as a piano accompanied song of yearning, with complete faith, for a divinely decreed heaven. He then made it Movement IV of his Second (or Resurrection) Symphony. The British LIbrary’s Music Blog calls Urlicht “a brief and otherworldly moment of repose.” The Mahler Foundation online says it depicts “humankind [as] freed from uncertainty and doubt,” and that Urlicht “brings with it the first ray of a light that will shine in glory at the end of the finale” of the Symphony.

Marsalis stays to play a piece that he told Jacobsen is “one of [his] favorites,” a haunting, lyrical, occasionally eerie 1999 work by English-Scots composer Sally Beamish, “The Imagined Sound of Sun on Stone.”

A first orchestral read-though of the work revealed it, and the other Beamish work on the program, to be both unmistakably modern and unquestionably accessible, even to dyed in the tux wool traditionalists.

Marsalis, in a breakfast time chat from his home, noted that “Her pieces are very singable…very melodic…Historically, accessibility…is through the melody…the thing that people take home with them. A lot of Sally’s contemporary music comes out of the study of the traditional repertoire.” (He and Beamish became friends when she attended his first performance of “Sun on Stone.”) Next up is another Mahler song, “Ich bin der Welt abhanden gekommen,” the title and first line of which translate as “I am lost to the world.” Again, Marsalis takes the place of the vocalist, letting his sax evoke “the peace achieved through the poet’s withdrawal from the everyday turmoil of the world and his absorption in the most meaningful and central aspects of his life: his heaven,

his life, and his song,” to quote the Mahler Foundation again. They also call the composition “one of Mahler’s supreme achievements.”

Beamish and Marsalis team up again for “Under the Wing of the Rock,” inspired by a Celtic poem about a Scottish woman hiding with her toddler daughter from government soldiers during the Massacre of Glencoe in 1692. She and her child were spared, luckily on that Wednesday, February 13, but it was a close call; the piece mixes passages of lovely lyricism with others of gripping tension.

A BBC poll of 151 conductors, five years ago, picked Brahms’ Symphony no. 2 as the 18th greatest ever.

That’s the closing piece for these VSO concerts.

Jacobsen first comment about this Symphony was “It’s one of my absolute favorites.”

He went on to say more about it, especially in the context of Brahms’s love for Clara Schumann, wife of composer Robert and a virtuoso pianist in her own right. No one knows if their shared affection was ever physical, either before or after Schumann was confined, by his own choice, in the mental institution where he spent the last two years of his life before pneumonia killed him less than two weeks after he turned 46. She lived for another 40 years, Brahms died about 10 months after she did.

Clara and Brahms “both thought of Robert as God on earth,” Jacobsen said.

In the Symphony, Brahms was “opening this incredible window up [to say] “look inside of me. [See] what is truly inside of me.”

“There is no specific story or program;” Brahms was writing “music for the sake of music.” “It really gives us the options to imagine what we want.”

“You can actually create the story you want, the story of love or obsession. You can see his youthful energy, absolutely joyful and youthful.”

Mahler: Urlicht from Symphony No. 2 in C minor

Sally Beamish: “Under the Wing of the Rock”

Brahms: Symphony No. 2 in D Major