One More for the Road: James Taylor & Jackson Browne 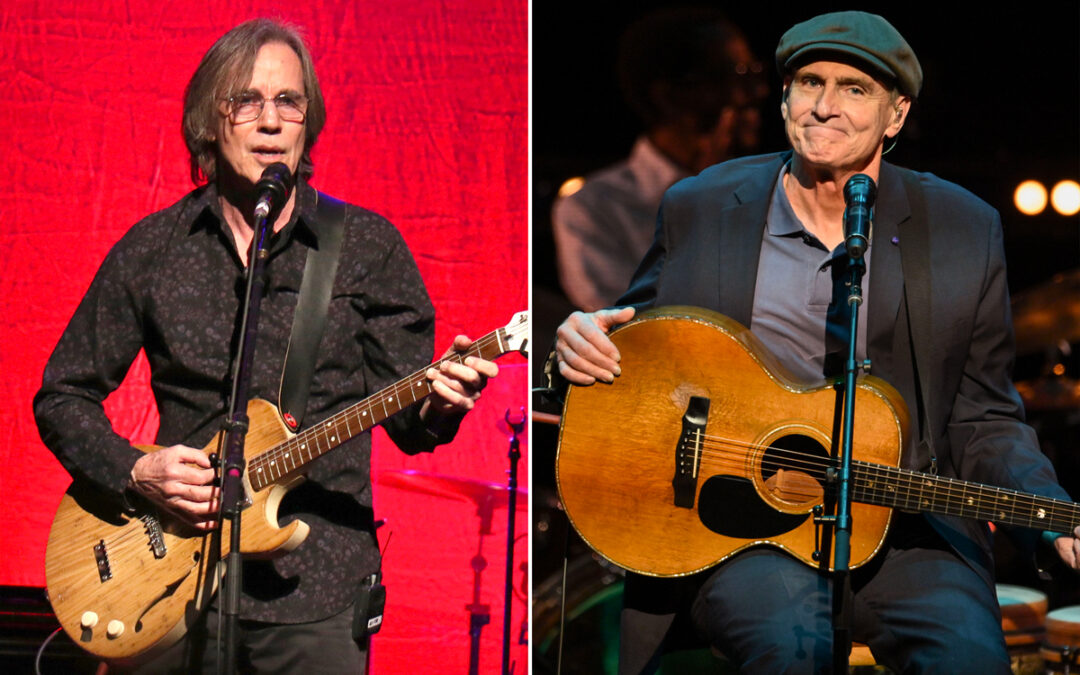 Aging as a rock ‘n roll songwriter and performer is a tricky journey. It’s a balancing act between the desire to continue to create while acknowledging that your fans – or most of your fans — are encased in a time warp of your peak years, that three-album cycle of favorite songs that pop up on the playlists again and again.

But Jackson Browne and James Taylor, for the most part, have navigated that path comfortably, acknowledging the bond that requires playing those old songs while continuing to write and record new work.

The duo arrives at Scope on Nov. 20. Proof of vaccination or a negative test within 72 hours is required. Tickets are $59 to $500.

They have new works that tread that late-career path in different ways. Each is 73. Each released his most popular and compelling albums in the 1970s, but they’ve continued to mine their need to tell stories (and, in Browne’s case, champion his causes).

Taylor, who has sold more than 100 million records, released “American Standard” in 2020, winning a Grammy for Best Traditional Pop Vocal Album. The disc features 16 classic cuts by writers ranging from Henry Mancini and Johnny Mercer to Richard Rodgers and Oscar Hammerstein. It’s his fifth album since “October Road” in 2000, though only two have featured original material.

Why standards? “I admire the craft of the professional songwriter,” Taylor told an interviewer last year. “Today we don’t really separate the song from the performer. But there was a time when these songs were going to be sung by lots of different people, and songwriters wrote them to serve a function in a musical — to establish a character, or to carry the action along, or to set the atmosphere for the time and place. I really envy that ability to apply your songwriting craft to a project rather than self-expression and personal experience, as I do.”

Browne, meanwhile, just issued “Downhill from Everywhere,” a disc of original material and one of his better late-career offerings with songs like “My Cleveland Heart” and “The Dreamer” that slide easily alongside his classics in concert setlists. It’s his fourth effort this century. Typically, he takes stands on ocean pollution, immigrant rights, and gay marriage, but also explores his softer, reflective side.

“I am in a state of grief for the world that my kids are inheriting — my grandson. Elephants and tigers are in danger. The ocean’s got dead spots in it. The reefs are dying. The natural world’s ability to bounce back from what we’ve done is an existential threat,” he told The Los Angeles Times earlier this year. “We’ve got these electric cars, so why don’t more people have electric cars? Why don’t we phase out fossil fuels? They won’t until they’ve sold us every last thing they have. I don’t get to talk about this stuff very much in conversation. So for me, the challenge is to write a song that people don’t mind hearing and that helps galvanize some sort of feelings or helps them find some resolve.”

Both Taylor and Browne got their start as teen songwriters, then nearly destroyed their careers with destructive appetites.  And each of them benefited from associations with famous rockers who promoted them. Taylor dropped out of high school and ended up in a psychiatric hospital with depression and drug addiction. His father rescued him, bringing him home to North Carolina.  Music provided a path. He was raised on a wide-ranging diet of show tunes, jazz, folk, blues, and a little classical, but he loved hymns and Ray Charles.

When his band broke up and his career stalled, Taylor flew to England, where his demo landed in the hands of Peter Asher, then with the Beatles’ Apple label.  Asher became his manager and The Beatles became his cheerleaders.

“I had been making music for five years. I wasn’t an overnight success,” Taylor said. “I had five years of stepping up to the plate before the Beatles picked up on me.”

When The Beatles wanted to sign him to Apple, Taylor was too young — he was 19. His father signed the contract.

His 1968 debut, “James Taylor,” wasn’t a hit. But it got him another deal and his next album. “Sweet Baby James,” launched his long career. He’s had a dozen Top 40 hits. And he finally beat addiction in the 1980s.

Browne started even younger as a part of the Laurel Canyon scene with so many songwriters including Joni Mitchell, David Crosby, Graham Nash, Neil Young, Chris Hillman, and Glenn Frey, among others. When he was 16, Browne penned “Take It Easy” with Frey. It became a signature hit for The Eagles.

His first hit, “Doctor My Eyes,” got him noticed then he became a star with “Late for the Sky,” “The Pretender” and “Running on Empty.”

But when he writes now, Browne has a healthy selective amnesia about what he’s written before. “Look, I’ve got a high opinion of some of my songs, ” he said, “but to write something new you have to forget everything you’ve ever done.”

In his latest album opener, “Still Looking for Something,” which easily would fit on “Late for the Sky,” he makes clear his quest, even at 73, is ongoing.

“I’m old, you know,” he said in an interview earlier this year. “It’s one of the undeniable facts of this life that it doesn’t last forever. So, I think my questions now have more to do with, ‘what can be accomplished in the time I have left?’ And, ‘what are we here for in the first place?’”