MUSIC PREVIEW: A Triplet of Trios from The Feldman 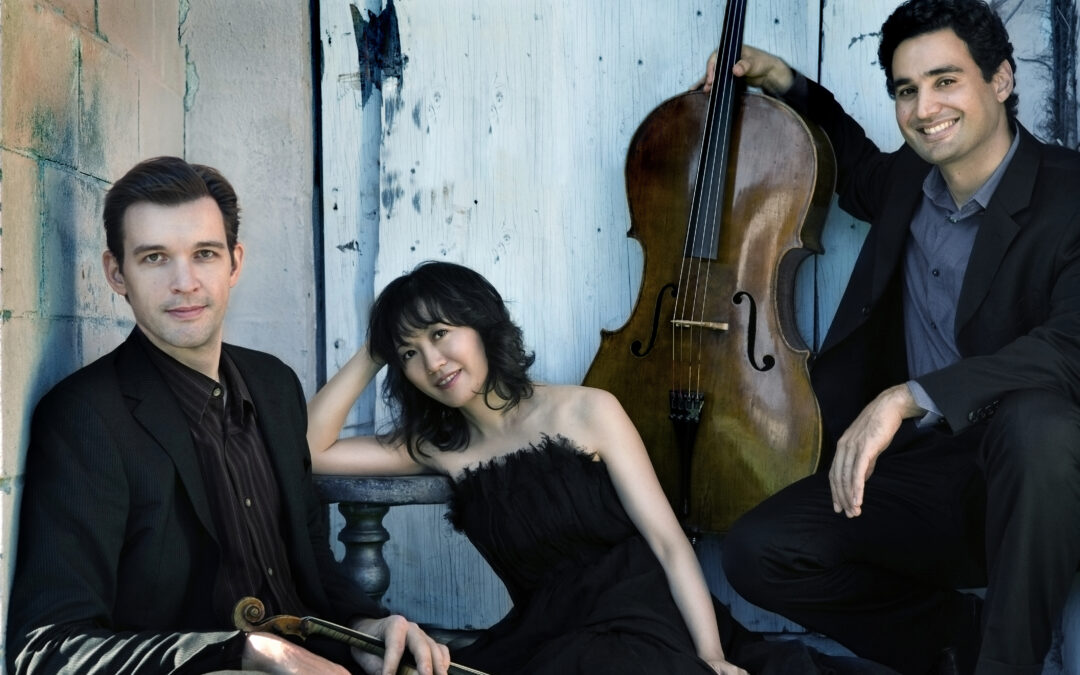 (Horszowski Trio is set to dazzle a Norfolk audience.)

Early December’s Feldman Chamber Music Society concert at the Chrysler Museum’s Kaufman Theater showcases three piano trios: a mid 20th Century masterpiece by the under recognized Armenian-Soviet composer Arno Babajanian, a contrast-rich work by Antonín Dvořák, and a piece by Claude Debussy that went missing for about a century after he wrote it while on a summer job at age 18. He was the house musician and music tutor-in-residence to some of the 11 children of Tchaikovsky’s wealthy widow patron, Madame Nadezhda von Meck.

The Horszowski Trio chamber group is bringing this triplet of trios to Norfolk some “four or five years” after they last played here, according to violinist Jesse Mills. He and wife and pianist Rieko Aizawa co-founded the Trio; together with long time friend and collaborator cellist Ole Akahoshi they make up the ten year old group.

The Trio comes trailing comments such as the New York Times’s “impressive…lithe, persuasive” and the Boston Globe’s “Eloquent, enthralling,” among a host of other adjectives of high praise, and the even more impressive New Yorker magazine’s characterization of them as “the most compelling American group to come on the scene.”

Debussy’s 1880 Piano Trio in G Major is the oldest work on the program. It’s delicate, even astonishingly so at the outset, with the sense of a call-and-response interplay between violin and cello, then adds sprightliness as it progresses and the piano becomes more prominent.

Mills said “The sound is very lyrical,” chatting by phone from his home – with his wife’s piano practice audible in the background of one call.

We think it is something special, Mills said. “It has a really soft side, a sort of lightness,” further describing it as “very effervescent,” with “long melodies and a little bit of the surprising harmonies that we like about Debussy but a little bit more traditional.”

He adds that “It’s not played that often because it does not sound like the Debussy we know.”

Then too, the score disappeared from view until 1982, when the handwritten original surfaced in the estate of one of Debussy’s pupils, finally being published in 1986.

Dumky, the subtitle of Dvořák’s 1891 Piano Trio No. 4 in E minor, Op. 90, is the plural of a Czech or Ukrainian word dumka, which describes a folk tune of sharply contrasting passages alternating between the slow and melancholy and the lively and cheerful. (Anyone who dozes during the peaceful passages of this one will get a powerful wake up call.)

Though Dvořák is seen “as this masterful composer of orchestral and symphonic music,” Mills notes, “This piece is really the opposite…really intimate. [It] really celebrates the individuality of the instruments.”

“Incorporating folk music into his compositions is a main feature” of Dvořák’s work in general, Mills noted, and Babajanian’s 1952 Piano Trio in F-sharp major “mirrors” that element of the Dumky Trio in its use of Armenian folk traditions. It’s been speculated that such celebrations of the Russian and Armenian music of the common people helped Babajanian avoid the dangerous ire of Stalin that crippled the careers of other Soviet composers.

“It’s beautiful music,”’Mills says. “Some of the textures are very lucious and overlapping and complex and very dramatic…It’s very Romantic.” Babajanian’s Piano Trio has, he adds, something of a “pop sound” that gives it a “friendliness to the ear.”

The Strad online magazine has called it “a rousing Armenian extravaganza.”

Babajanian is a “hero” in his native Armenia, Mills explains, but the works of this prolific composer of orchestral and chamber and solo instrument works, of scores for film, stage and ballet, and of more than 200 songs, are little known in the West except for this Piano Trio.

The Horszowski Trio is the namesake of Polish-American pianist and teacher Mieczysław Horszowski, who came out of pedagogic retirement at the age of 96 to teach Ms. Aizawa, then a 14 year old prodigy of the piano at the Curtis Institute. She studied with Horszowski for another four years, her last lesson being one week before he died, aged 100 years, 11 months.

Horszowski’s first piano teacher was his mother, whose piano teacher had studied under Chopin. Horszowski went on to study with Theodor Leschetizky, whose own teacher, Carl Czerny, was a prized pupil of Beethoven. So Ms. Aizawa’s musicianship, and by extension that of her Trio, can be said to descend directly from both Chopin and Beethoven. Few, if any, musicians today are tied so closely to such greatness.