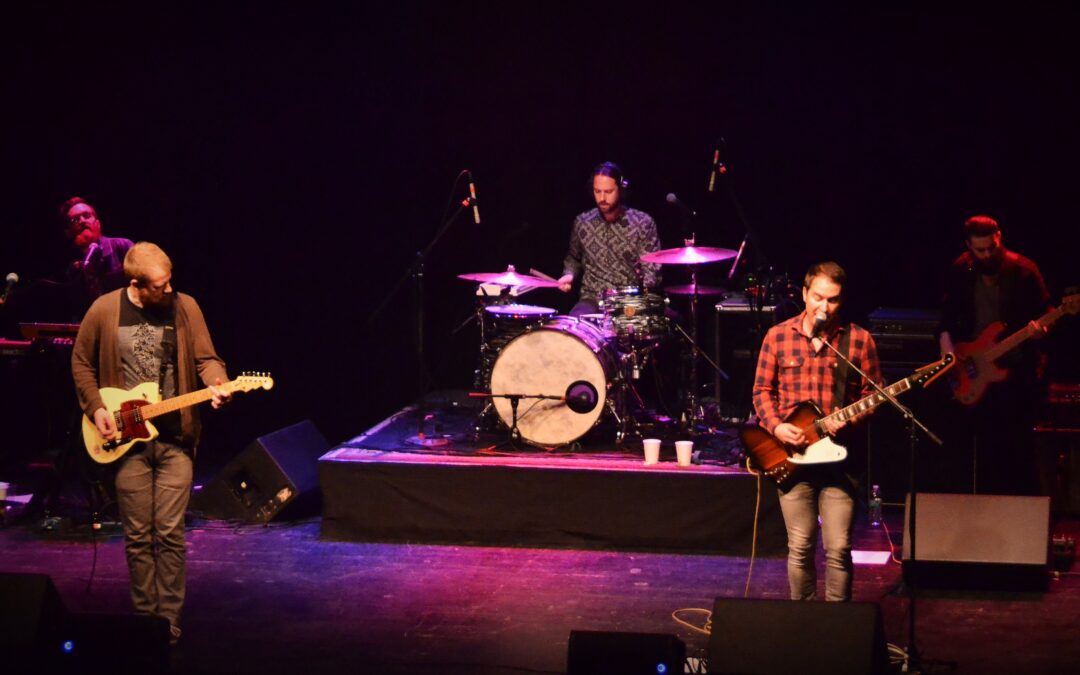 In their nearly 20 years, Mae has managed to navigate the twisting and turning labyrinth of the morphing modern music industry, rebounding from one whiplashing change to another

They began as an indie band before streaming dominated, way back in the era of CDs. They signed with Capitol during the last days of the record label dominance and relatively-generous recording budgets. After one album, “Singularity,” they were set adrift as labels merged and cut staff.

They went on hiatus, reunited, released some EPs into the stream, and then 11 years after their major label release, returned to indie land. Members left. And now, they’re without a label, but still with a loyal fan base nationally that means Zach Gehring, the band’s guitarist and one of two remaining members, leaves home in Virginia Beach for two or three-day mini-tours, playing places like Buffalo one night and Pittsburgh the next.

They return to The NorVa for their first local show in three years on Nov. 27 celebrating “The Everglow,” their 2005 release. The Juliana Theory supports. Proof of vaccination is required. Tickets are $22.50.

For Zach Gehring, Mae is one dish in a five-course tasting menu. He teaches — television and society and new media — at Old Dominion University and Christopher Newport University. He works at AFK Books and Records. He plays in Demons, a “post-whatever rock band.” And he’s a dad.

In a wide-ranging interview, Gehring talked about the band’s winding journey, creating songs in a streaming world, and reconfiguring how music figures in his life. Some answers have been edited for space.

Veer: What’s it like being back out on the road. I think your last Mae show was in 2019.

Gehring: There’s an excitement, a kind of relief, perhaps, that live music is back in some form. Clubs are taking precautions and making sure people are vaccinated, which is a good thing. It allows people to enjoy live music again and that energy translates. The Los Angeles show, our first one back, was incredible. But we definitely recognize that we’re doing this thing that we took for granted for a long time. So in terms of the band, I mean, it’s definitely different because right before we did that show in September, our drummer and the member of the band who started it with Dave (Elkins), Jacob Marshall,  decided to leave and he opted out of these shows. It came as a surprise. And it was late in the game. So we had to move fast and luckily we were able to find another drummer.

Veer: Tell me about the most recent album, “Multisensory Aesthetic Experience” (2018). Did it take 10 months to record?

Gehring: Yes, it did take ten months. That’s just a result of logistics and this want to get the songs right. I’m living here. Jacob was back and forth between Brooklyn and Nashville. And then Dave was in Nashville. He owns Schematic Studios, and that’s where we did the record. When you have access to your own space where you can create, the schedules kind of change. If you go to a studio where you booked time, there is this understanding that you have to get this thing done in time. That dictates how you approach what you have to do. With Dave being the owner, we were kind of emancipated. So we had a lot more time to spend creating and nurturing and developing the songs.

Veer: Was there a conscious decision to expand the soundscape or was that a matter of doodling around in the studio?

Gehring: I think it’s kind of both. It was conscious in that we did want to take advantage of the tools at our disposal and where we wanted to go creatively. We had access to not only the tools in the studio but also just amazing players that can help us reach the vision that we want to reach. When it comes to creative planning or intent, it’s always there, in some sense at a very foundational level, but oftentimes, these songs go in directions that surprise…Ultimately, the record is a result of this kind of unique situation that was informed by both opportunity and freedom, but also constraints, and kind of weird disruptions in the process. So (it was) a result of this exciting melee.

Veer: Are you and Dave writing now?

Gehring: We’re not writing collectively full time right now. Dave’s always writing. So in one sense, there’s always a creative flow going on. And, you know, there’s one song that’s close to being done now, but it’s one song, it’s not necessarily conceptualized as part of a record at this point. I think you see this in a lot of different artists because of the way in which streaming has transformed the way artists put out music. We think more now in terms of songs…We don’t have a formal intention to create a record, however, we’re always just kind of, in that mindset, and when possible, we’ll be doing that. I don’t think we put too much pressure on ourselves currently just to nurture our own health, both physical and mental health. I’ve never been more busy than I am now.

Veer: You’re 18 years into the band. I wondered how things have changed.

Gehring: There’s a lot of approaches to that question or angles I can take. For me, now, music is still such an intimate part of my life. But the form that intimacy has taken has changed. So where before in my early 20s and I’m out on the road, music in my life is much more of a direct engagement, a constant. It drives my daily life in a sense that it does not anymore. The form it has taken has changed. I have it here in a very special place. But I also have some distance there between myself and it. And that’s just a result of, primarily we have a family now. And so your obligations change, your priorities change. But I’m fortunate enough to still have music very close by. Most of my time outside of my family is involved in music in some form or fashion.

That’s kind of a personal trajectory. From an industrial dimension, it’s so hard to really speak clearly on and wisely understand the music industry now and how it impacts how Mae operates. Obviously, the big elephant in the room is the way in which new media technologies, streaming platforms have really altered the way people consume music, the way people create music. You don’t have to go to a big studio anymore. When we did “Singularity” and “The Everglow,” we did that out in LA in recording studios. Generally speaking, people (now) can create music in their bedrooms much more efficiently and then put that out there. The standard practices that have been long established have been radically altered in the past 20 years. It’s shifted pretty quickly. So I don’t know really know what it means now to be a musician in that sense.

We have this utopian understanding of the freedom that these technologies provide, in one sense. To me, I think it represents more labor being created for the artists and puts a lot more responsibility on the artist to manage a lot of different fields that take a lot of time to learn. When you think about getting music out and on streaming platforms. When you think about recording your music and you think about publicizing your own music. These are all dimensions of the music life that were taken care of for me when I was on Capitol Records. I didn’t have to worry about that kind of stuff.

We had a manager. We had a booking agent. We had these intermediaries that take care of certain things for the artists.  And now a lot of that has not gone away, but those services are rendered differently. Navigating that field seems really challenging.