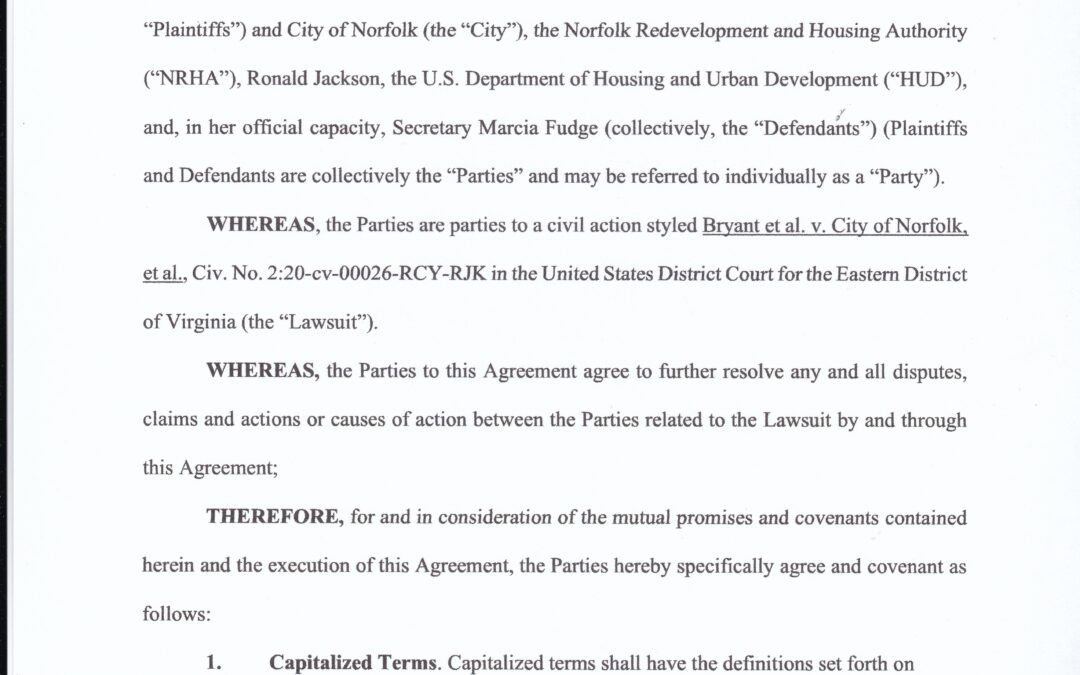 (A copy of the agreement)

The Norfolk Redevelopment and Housing Authority and the city have settled a lawsuit brought by residents of three public housing projects in the St. Paul’s area near downtown who said demolishing their homes without giving them new options would force them to move to highly segregated poverty areas or leave the city because of the loss of affordable housing.

The agreement provides for more replacement housing for relocating residents, improves the housing vouchers program, and commits the city to practices intended to make it easier for low-income residents to acquire housing.

Plaintiffs in the suit filed last year in federal district court against sought to halt the relocation of residents and order a new plan saying it did not adequately provide for about 4,200 residents, including 2,000 children whose 1,674 units were being demolished.

The suit also chronicled Norfolk’s long history of racial segregation in housing, including a series of redevelopment projects that perpetuated segregation and the plaintiffs contended drove Black residents out of the city. The plaintiffs were four Black residents of the public housing projects and two community groups — the St. Paul’s Quadrant Tenant Group and New Virginia Majority.

Plans for the St. Paul’s Quadrant will demolish three 70-year-old public housing projects in an attempt to create a mixed-use, mixed-income neighborhood with 2,000 housing units and 500,000 square feet of retail and office space.

The original redevelopment plan, the suit charged, violated the Fair Housing Act. It said the plan would significantly force relocated residents into high poverty areas of the city and reduce the amount of affordable housing for all Black residents. “In short,” the suit said, “Norfolk has planned a redevelopment project that will deny thousands of its Black residents’ affordable housing opportunities and access to integrated communities.”

In a March op-ed, City Manager Chip Filer and NRHA Executive Director Ronald Jackson said any resident who wanted to return to the St. Paul’s area would be able to do so. “The Department of Housing and Urban Development funding requires the city to build just what residents have asked for — an affordable, livable community with a mix of subsidized, low-to-moderate income and market-rate housing,” they wrote. “We know from redevelopment successes in Atlanta, New Orleans, and elsewhere that the ratio to strive for is about a third of each type of housing.”

The settlement alters the redevelopment plan, which used a $30 million Choice Neighborhoods Initiative grant from the Department of Housing and Urban Development to offer more than 600 housing choice vouchers to residents. The suit noted that landlords can refuse vouchers and the few vacancies that accept vouchers are in poor and segregated neighborhoods.

The agreement shifts the focus from vouchers to replacement units for residents and commits the city and the NRHA to make good faith efforts to develop a total of 95 additional units accepting vouchers by the end of 2028 in certain areas of the city.

It also provides for:

— An increase to 260 replacement units for residents of Tidewater Gardens in the St. Paul’s area, up from 226 in the current plan and 200 in the original plan.

— The development of 70 offsite replacement units for those in the redevelopment area.

— An improved program of 288 housing choice vouchers with increased purchasing power in one or more specified areas of the city.

— The option for residents to lease one of the 41 voucher units in Market Heights, a 164-unit apartment complex on Tidewater Drive scheduled to be available by the end of 2022.

— Payment by the city and the NRHA of security deposits, moving expenses, and early lease termination penalties for those moving from one NRHA property to another or those using housing vouchers.

— Annual funding of $3.5 million annually through 2025 for the NRHA’s “People First” program, designed to help residents transition to new homes and provide a variety of services, including job training, education, and child care.

— Payment of $200,000 by the city to the Legal Aid Society of Eastern Virginia to be divided by the plaintiffs as they choose.

The original plan filed by NRHA and the city with HUD provided for 200 units of replacement housing and a total of 418 housing choice vouchers.

The NRHA board of commissioners approved the settlement during its Nov. 18 meeting.  The parties notified the court that day that they had reached an agreement and filed the settlement on Nov. 24. NRHA officials did not respond to requests for comment, nor did the lawyers for the plaintiffs.

Norfolk City Council discussed the settlement in a closed session during its Nov. 9 meeting.  City Attorney Bernard Pishko said the city was pleased an agreement had been reached. “The plaintiffs and defendants (HUD, NRHA and City) had similar enough goals to reach agreement on the plans to redevelop Tidewater Gardens in a manner which deconcentrates poverty with a mixed-income neighborhood as the cornerstone for redevelopment,” he added. “The City looks forward to assisting with this uplifting plan.