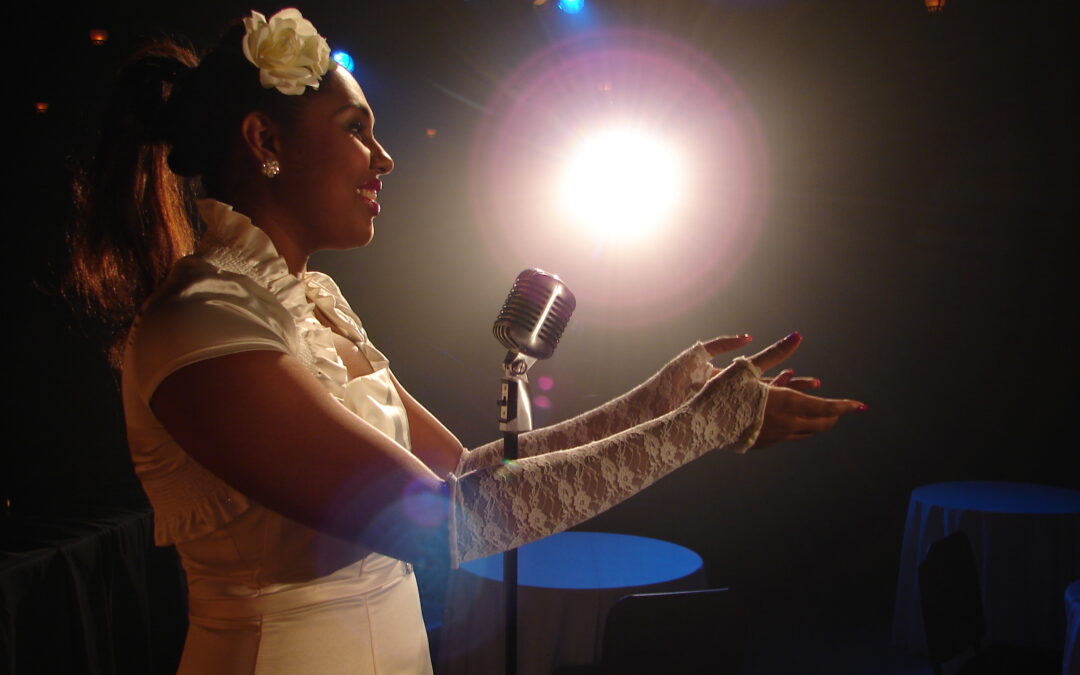 “You literally feel like…when you walk into that theatre, that you are right there in 1959 with Billie Holiday and her band,” says Georgia native Ashley Bishop-Diggs, who portrays the iconic jazz singer in Lady Day at Emerson’s Bar & Grill, which will grace the historic Attucks Theatre for three performances later this month.

Produced by the Virginia Arts Festival in collaboration with Norfolk State University Theatre Company, and directed by the company’s producing artistic director, Anthony Mark Stockard, this production of Lady Day at Emerson’s Bar & Grill not only commemorates the 100th anniversary of the Harlem Renaissance, but also serves as the Norfolk debut of the aforementioned Ashley Bishop-Diggs, an acclaimed singer & actress who has portrayed Lady Day in this play with music, over a dozen times. Diggs tells me by phone that she is excited to portray Billie Holiday at such a historic theatre as the Attucks, which hosted many of the greatest African-American performers of the 20th century, including Billie Holiday.

“I’m very excited. Looking at some of the really historic singers and performers that have been there, I feel so totally honored to be performing on a stage where they once were,” she says. Diggs, the youngest of three, who is also the daughter of a pastor, visited the iconic Norfolk venue earlier this year.

Written by Lanie Robertson, the play premiered at the Alliance Theatre in Atlanta, back in 1986. A successful off-Broadway production soon followed later that year, and starred actress Lonette McKee as Lady Day, till she was replaced by the great S. Epatha Merkerson, whose run in the role earned much acclaim. However, most of the current day public became familiar with this play through the record-breaking success that Broadway superstar Audra McDonald had with its 2014 Broadway debut, which was directed by Lonny Price. McDonald would go on to win an unprecedented sixth Tony Award for her role as the brilliant yet troubled jazz singer. She also captured both Emmy and SAG award nominations for the HBO broadcast of the show that aired in 2016.

Lady Day… is set in a seedy South Philadelphia bar in 1959, and chronicles one of the singer’s last performances. The show features live performances of some of Billie’s most beloved songs, including “Strange Fruit” and “Crazy He Calls Me,” along with quite a bit of both sad and comical banter from Ms. Holiday, who is clearly in a state of decline.

“What you can see, as a viewer, is that she is diminishing, though she’s going through her life—her ups, her downs, her joys…you also get to see her kind of diminish. And it’s an emotional rollercoaster. And not just for Billie, but for the audience as well,” says Diggs, regarding the play.

Born Eleanora Fagan, Billie Holiday died tragically on July 17th, 1959, at just 44 years of age. Despite her remarkable acclaim and success while alive, she died practically penniless. In a life filled with heartbreak, sadness, loss, heavy racism and drugs—Holiday’s proper recognition and appreciation occurred posthumously, through Grammy wins, an induction into the Rock and Roll Hall of Fame, major record sales, and a number of notable films that have dramatized her life, and added to her iconography.

For Diggs, the role of Lady Day came to her while a sophomore at Tennessee State University. The school was mounting their own production of the impactful play, and she earned the role over a number of more experienced upperclassmen. “When I started doing this show at 19 years old…that I would still be doing it, right now at 34, I had no idea,” she says with sincerity. “It has really taken me places I never thought it could.”

Having first done the show in 2009, the Atlanta based singer has performed the show at the National Black Theatre Festival for 3 years in a row, and even played Lady Day at the Kennedy Center. She’s known NSU’s Anthony Stockard for years now, and he actually directed her in this show, at the Alabama Jazz Hall of Fame. “From there, everything was up,” she says.

I ask Diggs what are her favorite songs to perform in the show. She quickly mentions the classic, “God Bless the Child,” which has sentimental meaning for her. “I love the story behind it…and it was one of my father’s favorite songs,” she says. And then she mentions “What a Little Moonlight Can Do” and the haunting “Don’t Explain.”

Preparing to portray Lady Day, who is renowned for her highly distinctive phrasing and voice, has involved watching video of the singer’s performances, studying her mannerisms, etc. “You want to be true to who this person is, but you don’t want to imitate,” she says. “You want to show the audience that this is what this person does, but there needs to be a piece of you as well.” Diggs also notes that Billie was a great improviser, but was very subtle in her movements. She hopes that people who come to the show will leave with an even greater appreciation of Billie Holiday.

“I want people to know about the legend…to know about her story, and to appreciate her music in a different way.”