The Beauty of Baseball 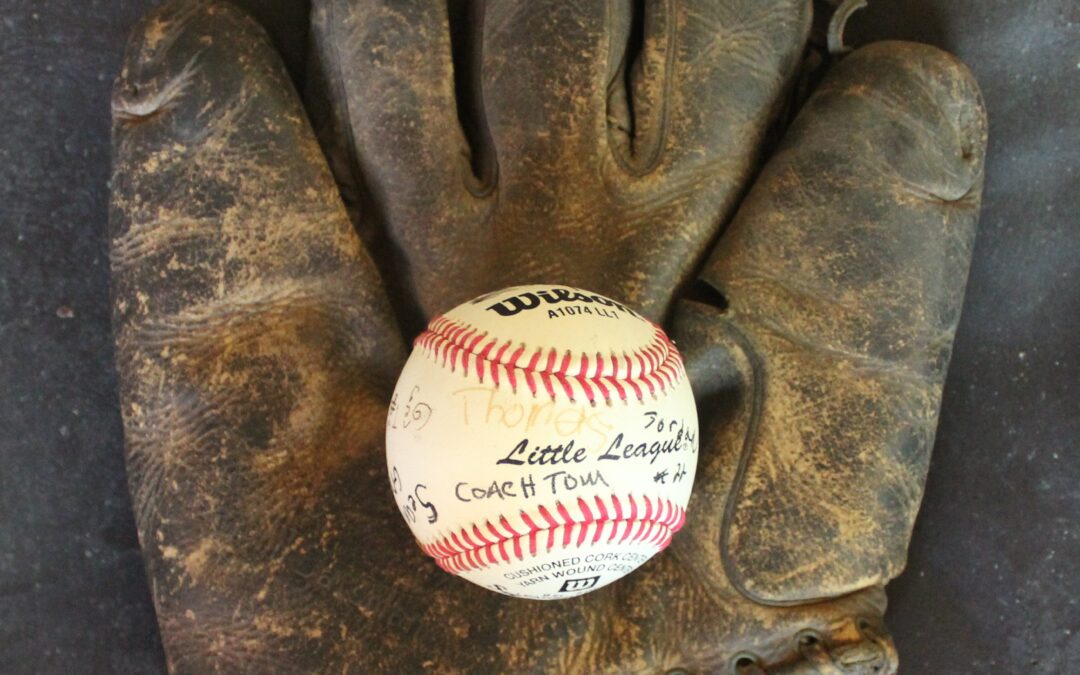 (THREE GENERATIONS OF FANS: My father’s boyhood baseball glove from the 1930s, holding a ball signed by my son’s Little League team, which I coached. Photo by Tom Robotham)

The one constant through all the years has been baseball. ~ Terence Mann, Field of Dreams.

Among all of the disruptions of the Plague Year—the social isolation, the closing of the college campus where I teach, and the trepidation I felt every time I went to the grocery store—the one that had the biggest impact on my psyche was the absence of spring baseball.

I know that probably sounds trivial. After all, the virus killed more than 600,000 Americans, threw millions out of work and took an enormous toll on the mental health of many people. I’m acutely aware of how lucky I was to have remained employed, teaching via Zoom, to have avoided illness and to have had a good social support system.

But as someone who has often stood on the precipice of depression during the winter months, I have always felt a stirring of hope as baseball arrives anew each April. Conversely, its absence in the spring of 2020 left me feeling adrift without an anchor. When the season did finally get underway in late July, it offered little consolation. Watching televised games—with those cardboard cutouts in the otherwise empty stands—underscored just how surreal life had become.

That said, I suppose there was an upside. The threat of losing something, after all, deepens our appreciation of it. Thus, when baseball began on schedule this year, I threw myself into it with renewed enthusiasm. Over the last six months, in fact, I’ve watched nearly every Mets game, including one in person with my daughter at Citi Field.

For the first few months of the season, my interest was heightened by the fact that the Mets were holding their ground in first place in the National League East. Alas, after the All-Star break, they began to fall apart. Nevertheless, as the regular season wound down, I kept watching. Sure, the Mets were out of contention. But the beauty of the game remained.

Now, as the World Series approaches, I find myself reflecting on why I love baseball so much.

One reason is that the game has been a constant in my life for as long as I can remember. That’s partly due to my age. When I was growing up, baseball was still very much America’s pastime. (Football didn’t overtake it until the early ‘70s, when I was already in high school.) As a result, everyone I knew—well, every man and boy, at any rate—loved the game. My dad, especially. Born in 1924 in Concord, New Hampshire, he grew up rooting for the Boston Braves. He also played a lot and held onto his boyhood glove—one of those flat-as-a-pancake designs with minimal webbing. It is now in my possession, and whenever I pick it up I can’t help wondering how he ever managed to catch hard-hit balls with it.

BY THE TIME I WAS BORN, in 1956, the Boston Braves were history. (They’d moved to Milwaukee three years earlier.) After that, my dad didn’t really have a favorite team. But he continued to love the game and would often tell me stories, especially about the old Polo Grounds, where the Giants played before moving to San Francisco. Commenting on Willie Mays’ iconic over-the-shoulder catch in the ’54 World Series, for example, he told me that it’s impossible to fully appreciate unless you’d been to the Polo Grounds. “He had to run a long way,” he said. “The stadium was shaped like a bathtub.”

Most of my friends loved the game as well. In fact, one of my earliest memories is of a birthday party at my friend Jimmy’s house. I don’t recall eating cake, watching him open presents or playing Pin-the-Tale-on-the-Donkey. All I remember is huddling around a small black-and-white television set, watching a Yankees game and being awed by Mickey Mantle’s athletic feats.

I would almost certainly have remained a Yankees fan had it not been for the formation of the New York Metropolitans in 1962. As every baseball fan knows, the Mets were unbelievably awful in those early years. In their debut season, they lost a whopping 140 games. Nevertheless, when my father took me to my first game in 1964 at the newly built Shea Stadium—across from the World’s Fair grounds—I was hooked. Simply walking out of the tunnel and catching my first glimpse of the infield’s graceful arc and the ever-expanding grass of the outfield was exhilarating.

It’s worth pausing there for a moment, for this is a key to my love of the game. I like other sports as well, and have fond memories of Knicks games at Madison Square Garden, and one particular Giants game at the Meadowlands, not to mention countless basketball and football games on television. But there’s nothing especially pleasing about the sight of a rectangular basketball court or a gridiron. A well-manicured baseball field, by contrast, reflects elements of the game itself—the way in which it stretches out, seemingly to eternity, like the summer days of childhood.

That sense of timelessness is reinforced, of course, by the lack of a clock. Any single game could conceivably go on forever. In 1968, in fact, the Mets played a scoreless marathon against the Astros before Houston came up with a run in the bottom of the 24th inning. I don’t remember that, but I do remember an ’86 playoff game between the Mets and the Astros. I’d been listening on the radio at my office. When it hit the 12th inning, I called my wife and told her I’d be late. When the Mets finally won it—and thus the pennant—in the 16th inning, I left for home, elated.

A lot of people, of course, would find such a game intolerable. But to my mind, the tyranny of the clock plays far too great a role in our everyday lives. For me, the leisurely pace of baseball is an antidote to that. I also love the fact that it “ain’t over till it’s over.” People often lump that expression in with Yogi Berra’s other charmingly nonsensical utterances, but it’s true. My father once told me about a game in which the Yankees were losing to the Dodgers 9-1, with two outs in the bottom of the 9th and two strikes on the Yankees’ batter. Then the Yanks came back to win. Until the last out, anything can happen. Compare that with, say, a 28-3 football game with two minutes left on the clock. It’s over before it’s over.

THE COMPLEXITY OF THE GAME is yet another thing that appeals to me. It has been called “the thinking man’s game,” and for good reason. Sure, it often comes down to athleticism: the power of a hitter, the speed of a runner or the cat-like reflexes of an infielder. But it’s also about strategy—especially in the National League, where a manager often has to decide whether to take out a pitcher, who’s throwing well, so he can bring in a pinch hitter. Sometimes that backfires—but sometimes it ends with a walk-off grand slam. You never know.

You never know—therein lies another key. I’ve heard a lot of people say that baseball is boring. But to me nothing could be further from the truth. On the contrary, there’s dramatic tension every time a pitcher gets set to go into his windup: will he throw a wicked slider that leaves the batter flailing? Will the batter foul it off, thus sustaining the tension? Perhaps he’ll hit a moon-shot into the upper deck, causing the home-team crowd and announcers to erupt in excitement. Or perhaps it will lead to a spectacular bare-handed grab by the third-baseman who will then manage to execute a rocket-throw to first. The thing is, even if none of that drama occurs, each at-bat is a thing of beauty: a groundball picked up by the second baseman and thrown to first may seem “routine.” But the gracefulness of such a play is akin to ballet.

All of this is best experienced live, of course. And we’re lucky here in Norfolk to have Harbor Park close at hand. Minor-league games have charms of their own. Going to a major-league park, however, takes things to another level with the electricity of the enormous crowd. In 1986, I experienced that in spades at the 7th game of the World Series, when the Mets won it all. But on any given day, a live game is a feast for the senses: the sight of the field and delight in the eyes of kids who are attending their first game; the aroma of hotdogs and the taste of ice-cold beer; that pleasing crack when the ball meets the bat, and the feel of summer sunshine on your face.

A lot of this is missing when you watch a game on television. Nevertheless, I find that ritual to be deeply comforting. Indeed, the instant I hear a televised game, with the banter of good announcers (shout out to Mets’ announcers Gary Cohen, Keith Hernandez and Ron Darling) against the backdrop of the noise from the crowd, I’m transported back to childhood—suddenly I’m 5 again, sitting on my living room floor playing with Matchbox cars, while my dad watches some mid-season game between the Yankees and the Tigers.

THIS SEASON WAS NOT WITHOUT its disappointments—and for the moment, I’m not even talking about the Mets’ weak second-half performance. For one thing, I could barely bring myself to watch the Mets play the Marlins in Florida, since the Marlins insist on playing under a roof so that the fans can have their air-conditioning. During one game, it was a balmy 80-degrees outside, but the Marlins still insisted on sealing themselves off from the summer-evening air. I’d forgotten how truly offensive such stadiums are.

Far worse, however, were a number of rule changes, implemented last season, that have tainted the game’s integrity: specifically, the shortening of double-header games to seven innings a piece, and the ridiculous rule that a runner is automatically put on second at the beginning of each extra inning. Worst of all were the rumors that Major League Baseball might soon replace home-plate umpires with computers. Why not replace players with robots while you’re at it? Finally, to add insult to injury, there was a lot of talk that the National League will adopt the designated hitter, which will eliminate that aforementioned bit of strategy from the game—not to mention the occasional thrill of seeing a pitcher with a .109 batting average hit a home run.

As discouraging as all of this is, though, I remain hopeful. Baseball, after all, has survived many trials and tribulations, from the Black Sox scandal to the depletion of players during World War II to player strikes and doping controversies. I’m confident that it will continue to survive, in spite of the numbskulls who have the delusional fantasy that “modernizing” the game will attract more fans. Let’s face it: Most people who think it’s boring will always feel that way.

Not me: You can be sure that whoever makes it to the Series in late October, I’ll be watching. After that, I’ll probably fill my leisure time with Knicks games— albeit while counting the days until the beginning of spring training.