Get a Taste of Smithfield at Red Point Taphouse 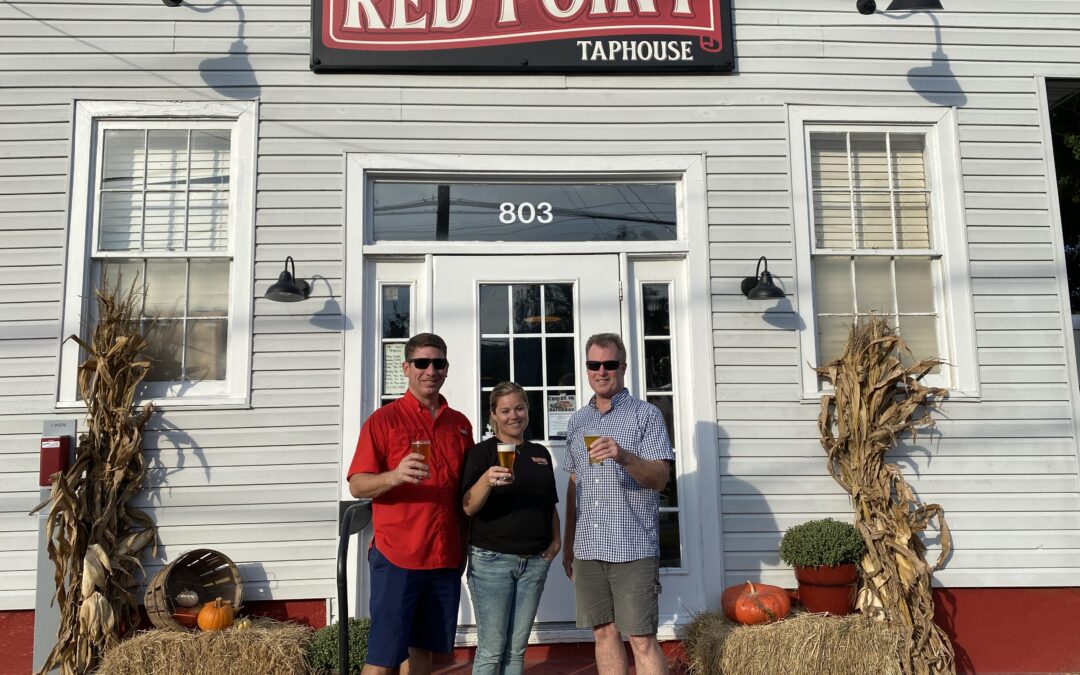 By Chris Jones and Diane Catanzaro

Farm-to-table dining AND craft beer brewed on premises in a small-town historic building? Yes, please! If this sounds good to you, check out the Red Point Taphouse in Smithfield.  Nick Hess and Derek Joyner connected as youth league baseball coaches in Smithfield, and are fans of craft beer. Tim Ryan been homebrewing since 1992 and has been a member of the Smithfield HAMS (Hop and Malt Society) homebrew club since 2014. Nick and Derek were tossing around the idea of opening a farm-to-table restaurant serving “elevated Southern” food, and beers with as much character as the food. They served up a pitch to Tim, he checked the signs, and wham, the idea was a veritable home run. Together these three teamed up to open the Red Point Taphouse in the summer of 2021.

The Red Point Taphouse is a brewery-restaurant located in a small white building on the main drag, Church Street, that leads to downtown Smithfield. The building has housed an array of businesses since its original incarnation as an automobile service station in 1929. It needed a lot of elbow grease and TLC to get in “game shape,” so Tim, Nick and Derek got to work. They made the tables, and they built the bar from a big slice of American walnut, and repurposed beams from a barn built in the 1840s. They repurposed, recycled, and reconnected the building with the community. The decor pairs old wood with corrugated steel for a rustic charm. They even salvaged an old shoe found in the attic, likely placed there by the building’s original owners to ward off evil spirits. This was apparently a common superstition in olden days. Today the inside of the building has a lot of character and no evil spirits were detected whatsoever, so it apparently worked!

This small brewery and restaurant remind us of the old-school craft brewing spirit that predominated back when craft beers were true small-batch “microbrews,” brewed by a hands-on founder or owner with passion and the skills to craft, “MacGuyver” and build the business from the ground up. Nick’s wife Julie is the General Manager and Tim’s daughter Kelly could be bartending when you visit. It’s easy to feel welcomed, whether you are a local resident or out-of-town visitor. The building’s small footprint is 770-square feet, with a solid chunk of that dedicated to the kitchen and brewery. So, it’s hard to not meet people here! The tables seat about sixteen persons. There is additional seating at the comfortable 10-foot bar and on the open-air patio behind the building. There are plans to increase the deck’s size and add more storage and another restroom to the facility.

The cozy kitchen allows chefs Zach and Adam to whip up meals and noshes with emphasis on locally sourced foods, and right beside the kitchen is the one-barrel brewhouse where Tim performs modern-day alchemy, turning Smithfield well water into salubrious beer. The beer is brewed and fermented about 15 feet away from the bar. You can’t get much closer to the source without tapping it directly from the fermenter!

The restaurant menu is small but refined, and our food was very tasty. This is a real restaurant with an emphasis on fresh and locally sourced foods prepared with care. In early October we had a pickle plate appetizer of crisp assorted veggies lightly pickled in beer vinegar. For dinner Chris chose a crab cake triple play of three petite crab cakes drizzled with a trio of sauces of corn chowder, chili mayo, and herb chutney. Yum! Diane enjoyed a Maine Lobster Roll, with luscious chunks of lobster in a bun homemade with spent grains from the brewery.  Other dishes include the Hamtown Cuban sandwich made with Virginia country ham, the Huli Huli duck leg, local pork meatballs, and grilled shrimp with chimichurri. The vegetable soup pistou with smoked green tomato broth and charred scallion chimichurri sounds delicious. We plan to pair this vegan soup with the homemade spent-grain barley bread on our next visit. Of course, the food menu will vary with season and local availability, but as you can tell this is a far cry from pub food. Prices are, however, very reasonable with “Ma” and “Pa” plates ranging from $12 to $25. Blue corn hushpuppies with country ham and fancy pimento cheese for $6 would be a good starter or a tasty nosh.

When we visited, they had six of their beers on tap, plus a handful of Virginia craft guest beers. The Red Point’s “What the Helles Lager” was light, clean, and tasty. Their “Big Ass Belgian Blonde” had a higher-alcohol malt presence and a touch of that distinctive Belgian yeast. The “Amarillo by Oregon IPA” was a refreshing mouthful of Cascade and Amarillo hops, dry hopped and sporting a killer West Coast herbal aroma. The “Pagan Sunset” is a New England style IPA with Citra, Mosaic, Eldorado, and Bru-1 hops creating aromas and flavors of tropical fruit and pineapple. “Waterman’s Wit” is a Belgian-style wheat beer with citrus notes. “Jillie’s Amber” is their biggest seller, originally brewed for a friend’s wedding, with a flavor enhanced by the presence of kilned coffee malt along with Munich and caramel varieties. A shade or two darker than the typical amber, it also has more flavor than most and pairs well with many foods.

Another plus is a full ABC license, so you can have craft beer, Virginia wines, bourbon, craft cocktails, or a handful of offerings from Smithfield’s own small-batch Blue Sky Distillery, including their Spiced Rum made with vanilla, citrus, and local honey, the intriguing Painted Pig Peanut Butter Whiskey and the equally intriguing Smoked Bacon Maple Whiskey. Check out the Red Point Taphouse and experience quality locally-sourced food and drink in a friendly small town setting.