ART: To the Moon and Back 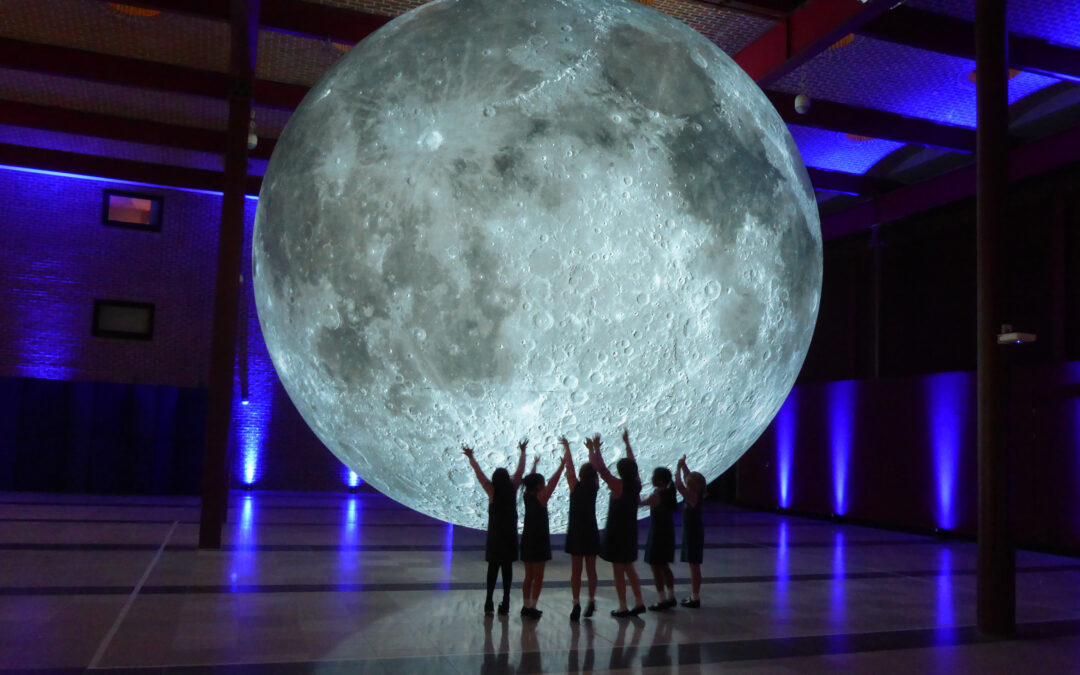 A muse of poets, politicians, artists, athletes, and academics, the moon has infiltrated virtually every aspect of world culture since ancient times.  And the moon is still a fixture of popular culture appearing in the titles of songs, albums, books, and movies from Moon River to Moonstruck, as well as snack food and brews like Moon Pies and Blue Moon beer.

A feminine symbol, the moon has long been associated with darkness and mystery, emotion and intuition, cycles and renewal, and time and transition.  Through all its many phases—bearing romantic names like Wolf Moon, Snow Moon, Pink Moon, Harvest Moon, and Hunter Moon—this celestial body’s reflected glow transforms meadows, mountains, forests, and frozen lakes into magical scapes of ineffable beauty.  In mid-October, one of those scapes will be Norfolk’s 43rd Street.

From a scientific perspective, the moon’s gravitational pull controls high and low tides.  It was this fact, specifically, that gave rise to world-renowned multimedia artist Luke Jerram’s Museum of the Moon.  Based in Bristol in the UK with more than a dozen rivers running through and under his town, Jerram was struck by the dramatic tidal range of the rivers he traversed on his daily bicycle commute.  The Avon River’s, at 49 feet, is the second largest in the world.

Previously, I was most familiar with Jerram’s glass microbiology, especially his Coronavirus Covid-19 sculptures.  But it was the touring exhibition Museum of the Moon that caught the eye of Charlotte Potter Kasic, interim executive director at ODU’s Barry Art Museum.  For Potter, Jerram’s “contemporary practices are really compelling.”  Plus, she had worked with him in the past and knew him to be a professional who could deliver.

In addition, coastal Virginia’s heightened awareness of sea level rise and serious tidal flooding issues in recent years, provides a highly relevant subtext.  And with International Observe the Moon Night falling on October 16, not to mention Norfolk’s NEON Festival opening on October 21, the timing of this emphasis on what Kasic calls “luminosity and light” seemed written in the stars.

Jerram’s moon, some 23-feet in diameter, suspended in the air, and fused with a surround sound composition, has been described as breathtaking, calming, peaceful, and simply stunning.  Moonbathers who lay beneath it, some holding hands, would no doubt add romantic to the list of descriptors.  Digital images obtained from a NASA satellite are printed on the surface and internally lit, casting an ethereal light and providing viewers with an intimately clear and accurate view of the lunar surface.  Each centimeter of the spherical sculpture represents 5km of the moon’s surface, yet the scientific accuracy of this immense hovering orb does not overshadow its poetic lyricism.

Jerram’s sculpture derives meaning from the conflation of the moon’s rich socio-cultural, religious, mythological, and scientific history and the installation’s context.  Created in 2016 and exhibited internationally in a variety of indoor and outdoor settings, the sculpture, whose material is semi-secret—”material confusion,” says Potter, is part of the mysterious allure—may take on spiritual significance within a religious setting or a kind of otherworldly and awesome, yet benign and familiar, presence in other types of venues.

The moon has been said to be like a “universal commons,” a natural resource shared by all, with various cultures, depending on their vantage point, seeing in the surface of the moon a man; the silhouette of a woman; a variety of animals from buffalos to rabbits; dragons; and more.  Lunar festivals have sprung up in response to the pull of the moon, with China’s being perhaps the most widely known and celebrated.

In that tradition, the Barry is mounting its own Moon Festival which will close-down all of 43rd street for some dancing in the moonlight and a packed array of other experiences and activities for all ages.  A collaboration with a dazzling roster of community partners representing visual art, various scientific and engineering disciplines, music, theater, and more makes it all possible.

The connections between earthly and celestial realms enjoy a long and storied history.  For three days in October, Norfolk will become a nexus of contemplation and celebration of this supernatural delight which, thanks to the Outer Space Treaty, is owned by no nation but belongs to everyone.

Luke Jerram:  Museum of the Moon