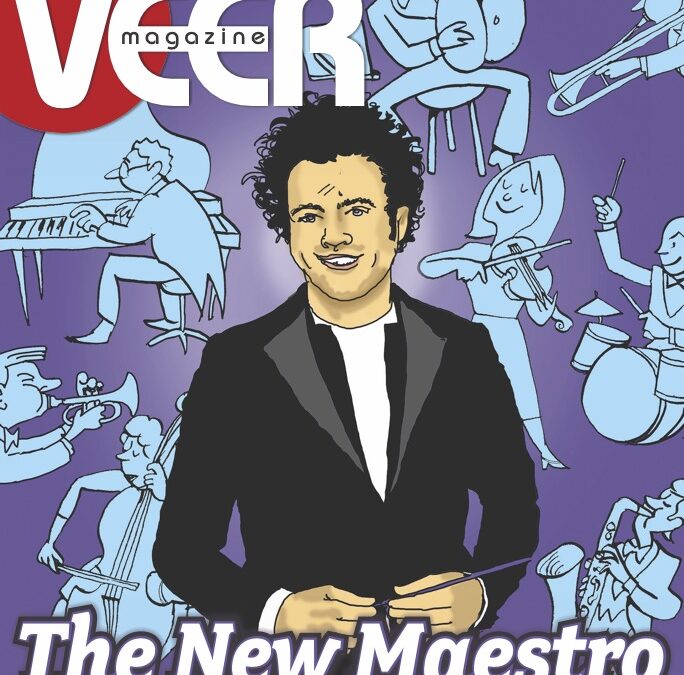 (Maestro Eric Jacobsen on the cover of Veer Magazine. Illustration by Walt Taylor)

The newly appointed twelfth Music Director of our Virginia Symphony Orchestra, Eric Jacobsen, flew into town from his current home in Brooklyn late last month, hitting the ground – or rather the stage – running, with rehearsals, board meetings and meetings on programming concerts, “meets and greets with various VSO communities,” dinner, audio editing and then hastened back to Brooklyn, finding time at stops along the way to chat by phone and text about what he has in store for Virginia.

One comment he made is that he “likes to throw parties and to have people own that party.”

Conducting and programming a season of concerts is, to Jacobsen, much like giving a party. The musicians and the audiences are the guests, and the host/conductor is out to make their experience joyful and fun and meaningful and memorable. Most especially, to make it memorable.

Jacobsen was in Norfolk to rehearse his first conducting appearance here, a December 2-5 concert featuring sax virtuoso Branford Marsalis, from the family that is America’s version of the Bach and Strauss family musical dynasties.

He invited this writer to the “read through” of that December concert, which revealed that our 101-year-old Symphony has another acrobatic conductor on its hands, or rather, on its podium.

Crouching and bounding, getting every bit of himself into the music, sometimes looking like he is galloping on some tuneful and fiery steed, Jacobsen conducts with everything from his toes to the crown of his curl topped head,. It’s a display of wholehearted commitment and passion. He’s clearly having as much fun as any party guest could ever wish for.

(His father Edmund, who spent three decades as a violinist with the Met Opera, told him, “the better you get, the more fun you have.”)

On the phone he summed up the interaction between conductor and orchestra, in non-musical terms. “I think that I like to bring out the best in people. I like to see people excel and be excellent. I am challenged with trying to figure out how to do that. I want people to have every opportunity to be their best, whatever is necessary. We all want and need different things at different times. I hope I can be that person for everyone [in the orchestra].”

Jacobsen will be house hunting soon, planning to become a Norfolkian while maintaining his Brooklyn home, he said. He and his Grammy winning wife, singer-songwriter Aoife O’Donovan, will be looking for a school for daughter Ivy Jo, whose fourth birthday is coming up next month. That’s about as firm a commitment to a community as parents can make.

Ivy Jo is named after his late mother Ivy, a flutist whose other namesake is a prize for young flute players in his native Long Island. He lost her when he was only 10, and when asked if wanting to be a musician had something to do with fulfilling her expectations, said “I’m sure that is part of what I do, deep down– wanting to please her memory and to do something that she would have wanted me to do. I don’t think she thought I was going to be a musician – my brother was more into it than I was.”

Jacobsen is also an accomplished cellist. When he and violinist brother Colin were students in the 1990s, they founded a small, New York-based orchestra that is now called The Knights. The name was shortened from the original Knights of the Many Sided Table (they were into King Arthur tales). Those “many sides” refer to the wide range of their repertoire, from Baroque to indie-rock. The Knights’ website says “We seek to engage with contemporary culture through vibrant performances that honor the classical tradition and our passion for musical discovery.”

Passion and discovery. Those seem to be hallmarks of Jacobsen’s musicianship. 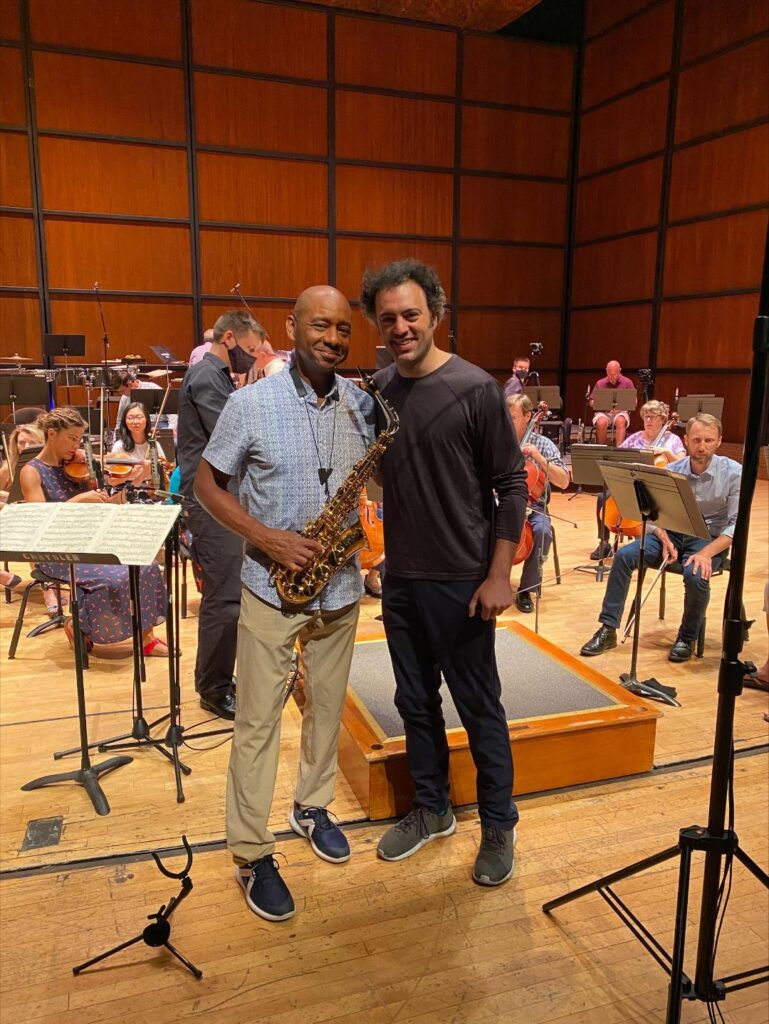 The December concert will feature a pair of contemporary works for saxophone and orchestra by British composer Sally Beamish, along with Brahms: Symphony No. 2 and a couple of Mahler songs, though just which ones had not been decided when we chatted. He was rehearsing the Beamish pieces and the Brahms when he was here most recently.

The Marsalis-VSO session was not just a rehearsal but a sound and video recording and still photography session as well. There’s an album in the works, the first studio quality recording of Beamish’s “The Imagined Sound of Sun on Stone” from 1999, and her 2006 piece “Under the Wing of the Rock.”

About that CD-to-be he said “I like to go deep. I feel like that’s how I like to build projects. This is an opportunity for VSO to come out with an album that will put the orchestra in a place that it deserves to be, a national place where it deserves to be.”

He also said that he is thinking in longer terms than this first, three year contract. “Anyone who takes a position like this is thinking long term. I’m thinking of building the orchestra and growing along with it. Really you have got to allow for that relationship [between conductor and orchestra] to percolate.”

While he did pick the works for the December concert, much of the current season was set before he was appointed, so the 2022-23 Symphony Season will be the first here for which he will choose what is performed. He talked about how he puts together a single concert or an entire season:

That phrase, “go deep,” as in to research or to plan in multiple layers, kept cropping up in his comments about his profession.

He also used the term “festival programming,” which he called “a shorthand for featuring one composer or one genre, or music that has been influenced by other music, or as broad as how composers represent water; ways to work out a quick way to get to people.”

“Every community is completely different, with different musical needs.” You “do what you can to meet the separate demands of each community and honor those differences.”

“I want to talk about music with different people. It’s a constant conversation with a feedback loop where you hear what people are interested in. That’s something that is both exciting and necessary .”

His first contact with the community of Hampton Roads and Southeast Virginia came when he was a VSO guest conductor in March of 2018. In March of 2020, just as COVID-19 began wreaking havoc on society in general and especially on the performing arts, he returned for a socially distanced, masked and pandemic restricted engagement as a candidate for the Music Directorship.

“My first interaction with the orchestra back in 2018 felt very like-minded…instantly really great. [R]ealizing…that the feeling was mutual, that the musicians and orchestra also responded to the time we had together made it even more exciting,” he said by email at the beginning of an whirlwind 48 hour visit last June for the announcement of his appointment. In person, he called that concert “Love at first hear.”

Speaking at the June 2, 2020 public gathering for press and other friends of VSO, he joked that after the 2018 concerts he “called his wife” and said, like an embarrassed, straying husband, “I’ve met this orchestra. I think there’s a connection.”

“The potential for great artistic projects here felt so heightened because we’re already starting from a strong footing…every event can be memorable. And if we’re not creating memories in a community and with ourselves, why do anything?”

Now he adds, “I’m so impressed. What a smart orchestra, what a beautiful history!”