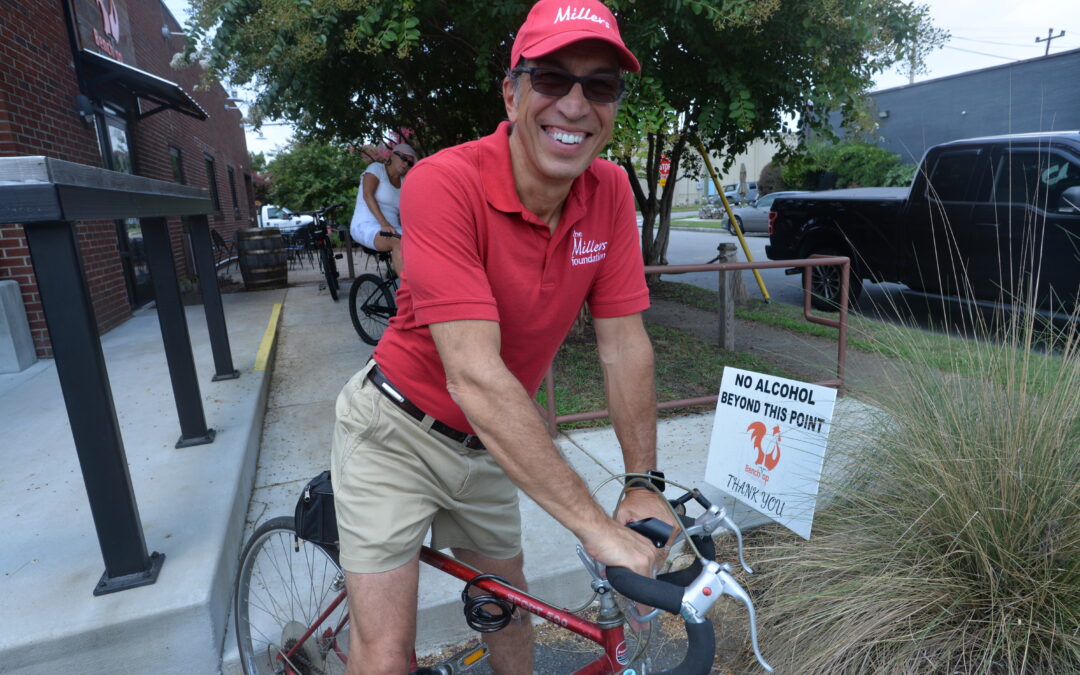 What better way to reacquaint yourself with the scenic Elizabeth River Trail than by participating in Millers Bike & Brews 2021?

The bicycle ride begins at 2 PM on September 18 at Benchtop Brewing Company and covers the Trail with beer tastings scattered along the way featuring brews from Elation Brewing and The Bold Mariner Brewing Company as well as Millers Mart at ODU. There’s a charity scavenger hunt, entertainment and fun swag bags to be had. From 3 to 4 PM, kids activities will be hosted at Plum Point Park.

At 5 PM, participants pedal on over to Smartmouth Brewing Company for a fun after party featuring live music by Fretomolgy (who is waving its fee so more money can go to Millers Foundation) and food trucks.

This is the third year for the event which is presented by Millers Energy to benefit its family-run Millers Foundation, founded in 2004 as a way to identify and help small charities in the community.

“We raised close to $40,000 in the first two years of Bikes & Brews,” said Jeff Miller, CEO of Millers Energy in Norfolk. “We’re a local company and we try to keep everything local. Our foundation focuses on the smaller local charities where we feel like we can make a difference. It has just been a really rewarding experience because you go into some place like Western Tidewater Free Clinic, where they bring people in from below the poverty level and provide them with the services of a dentist and doctor all in one place, and then take them home. You give them three or four thousand dollars they can help a lot of people and make a huge difference.”

Porter Hardy is president of Smartmouth Brewing Company. His brewery has supported this event from the beginning and likes that it also promotes a healthy lifestyle and the Elizabeth River Trail.

“First, I’ll say that I love the ERT and think it is a great enhancement to our community,” Hardy said.  “Many of us at the brewery use it regularly.  So, anything that helps maintain and improve the ERT is awesome.  One cool thing about The Millers Foundation is that they donate to very small non-profits.  So, by supporting them we are supporting several organizations in the community.  I think this event in particular brings out new people and is a good way to get the family out for a ride.”

One of the ways Millers Foundation has helped includes paying for dental instruments used for cleaning teeth for Park Place Dental. They also aid St. Mary’s Home for Disabled Children by purchasing standers.

“Kids with traumatic brain injuries who can stand on their own and take a shower,” explained Miller, “you put them in a stander it allows the disabled folks to take a shower.”

Jeff Miller stresses the importance of having his entire family engaged in the philanthropic Foundation.

“It’s very meaningful to us,” he said. “At one point we even got the grandchildren involved.”

The Foundation has an annual grants process for application on its website. Miller said 75 to 100 are processed on average each year with 12 to 15 charities receiving between $5,000 to $10,000.

As for Millers Bikes & Brews, the idea came to Jeff Miller as a board member of the Elizabeth River Trail.

“Spending time on the Trail as a runner and seeing how beautiful it was it seems just natural there should be an event there. So it just came together in a brainstorming session one day and off we went.”

Check-in begins at 1:30 pm at Benchtop Brewing and Millers-ODU

Pre-registration and more info at millerfoundation.org or 757-640-2157