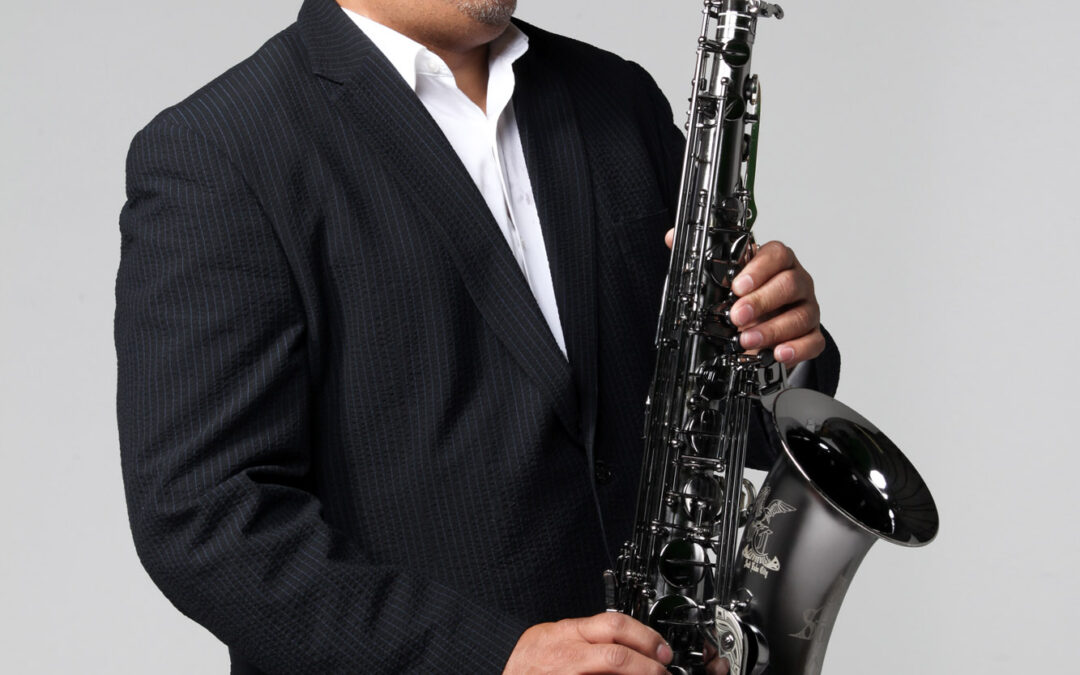 Learning that we share the same first name, during my recent conversation with the contemporary jazz legend known as Najee, was just one of many interesting tidbits that were revealed during our lengthy chat. Born Jerome Najee Rasheed in New York City, where he was also raised along with his siblings, by a mother whom he says had “a great ear for music.” Young Najee would do his chores, and participate in house cleaning on the weekends, while the music of James Brown, Duke Ellington, and many other African-American titans of great American music played in the background…providing some much needed, soulful ambiance.

“She loved Joe Henderson,” he says, about his mother. “I was attracted to the sound of the saxophone…and grew up with the sound in my head.” Henderson, a jazz tenor sax great, is just one of the many jazz masters who influenced Najee, a multi-instrumentalist who dazzles on both the saxophone and flute, during his formative years. Well before he studied at, and eventually graduated from—the prestigious New England Conservatory of Music, Najee studied under jazz icons like Jimmy Heath, Frank Foster and the great Billy Taylor, as part of New York’s Jazzmobile program, while he was still in high school. Such high-level formal training helped develop his musical chops as a jazz musician, but Najee loved the contemporary R&B music of his childhood as well, growing up during the Motown era that dominated the sixties, before moving into his teen years with the sound of classic seventies soul and funk music.

Once Najee was done with his studies, his career would take off in the eighties—initially as a touring musician backing up the likes of Chaka Khan, which soon led to a major label contract, and the release of his debut album, Najee’s Theme, which earned him a Grammy award nomination. That hugely successful debut, and the subsequent successes by albums now considered classics of smooth or contemporary jazz—including Tokyo Blue, Share My World, and his tribute to Stevie Wonder, Najee Plays Songs from the Key of Life, all juggernaut releases of the nineties, have established Najee as a contemporary jazz legend. Along with his Grammy award nominations, he has earned multiple Gold and Platinum selling albums, multiple NAACP Image Award wins, and now has an enviable decades long career. Najee has also collaborated with some of the biggest names in popular music history, including Herbie Hancock, Quincy Jones, George Duke, Stevie Wonder, and even Prince. He performed at the second inauguration of President Bill Clinton, as well as huge international gigs, such as a birthday celebration for the great Nelson Mandela, in South Africa.

Released in November of 2019, Center of the Heart is Najee’s most recent album, and he will perform music from it during his upcoming concert at Norfolk’s gorgeous Harrison Opera House, for the popular Church Street Jazz series. Like practically every other music artist, last year’s start to this ongoing pandemic greatly disrupted Najee’s ability to tour—and therefore promote his recent album. “Center of the Heart didn’t get a lot of attention due to the pandemic. We were right in the midst of touring when the whole thing started,” he says. “I was actually over in Europe to do all of the promotional stuff…” He had to come home soon afterwards due to the international lockdowns.

Despite the many negative consequences, which he acknowledges, that came out of the pandemic last year…there was a silver lining for him personally. “Honestly, it was a good reset for me because most of my adult life has been spent as a touring musician,” he says. The time off the road also allowed him to spend more time at home with his teenage son, who is still in high school.

Now he’s back on the road, promoting the newest release, and reconnecting to his many fans who missed seeing him in concert. No matter how much new music he makes though, Najee tells me that there are certain catalogue staples that he must perform during his shows. “I cannot go and do any show around the world, and not play ‘Betcha Don’t Know,’ ‘Tokyo Blue,’ or ‘Najee’s Theme,’” he says with a chuckle. “They’ve become classics.” Those songs were not just hits for the New York native, who now calls Florida home. Their success reflects a time when his thoughtful blend of R&B and jazz music had a really large amount of devotees. “For a jazz artist to achieve gold and ultimately platinum status was a big deal back then,” he says, rightfully.

We both agree that such success would be damn near impossible now for an instrumentalist to achieve. “It’s a totally different game now,” says Najee. “When I came up, I had the benefit—thank goodness—of a big machine.” Due to the size and might of his catalogue though, he is still in a great position in the current industry.  He’s working on a new album that will eventually be released with Shanachie Records, a respected indie label that works with quality adult music artists. He savors being an independent artist after years of being tied to EMI/Capitol. Discovering the beauty of such independence occurred during his time working with Prince. Najee is featured throughout the purple one’s excellent yet under appreciated The Rainbow Children album, which was released in late 2001, and features experimental jazz and showcases the artist’s deeply felt religious conversion.

“Prince changed his life man…you couldn’t go to his shows and hear the cussing anymore,” he shares. “People wanted to hear ‘Dirty Mind’ and ‘Sexy MF’.” Najee has a bunch of Prince stories, and many eye-opening stories of Stevie Wonder as well. They will make for a great memoir one day.

And perhaps he will share one or two of those stories with the audience, when he plays the opera house next month. He will be supported by the likes of Grammy-winning guitarist Freddie Fox, and the popular Nathan Mitchell, who recently scored a number one hit on Billboard’s smooth jazz chart.

“We’re very honored to play this one,” Najee says. “It’s gonna be a very special evening.”