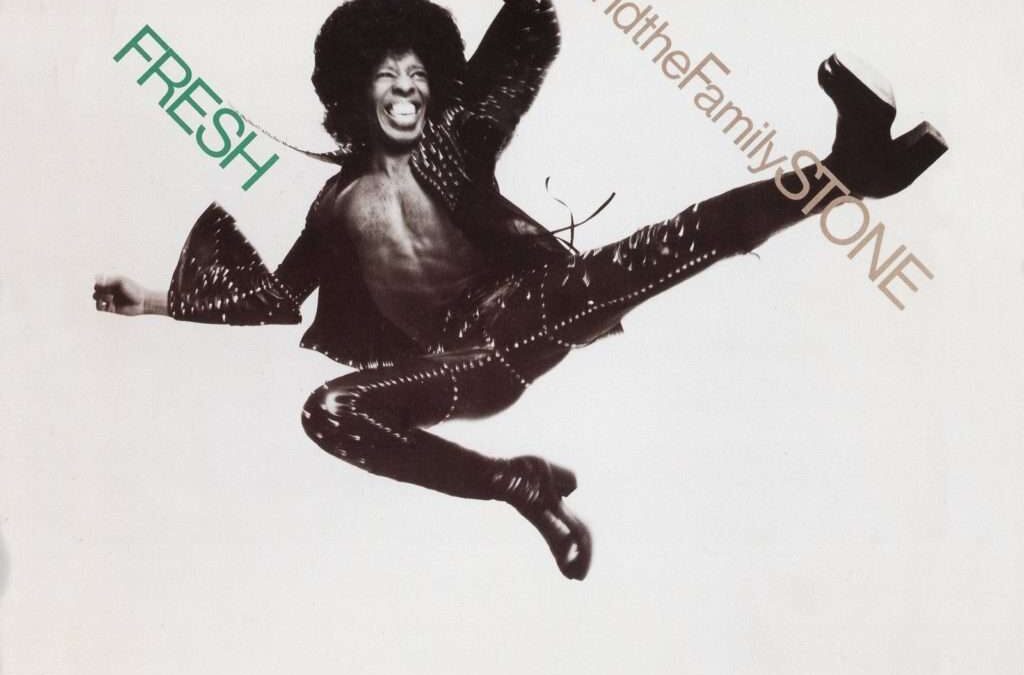 Sly & The Family Stone will forever be remembered as one of the most influential funk/soul/pop groups of the 20th century.

The band formed in 1966 and was notable not only for its multi-cultural makeup of musicians, but also in the blending of sounds. One music critic said, “there are two types of Black music: Black music before Sly Stone and Black music after Sly Stone.”

In 1967, the band made its recording debut with the album “A Whole New Thing.”  Saxophonist Jerry Martini, the only original member still in the group, is said to have encouraged Sly to take a more upfront, leading role from this point on, and so he did.

Sly Stone went from blending in to standing apart with his flamboyant clothing, platform shoes, big afro, and sunglasses. Sly emerged as a charismatic showman and rocketed the group to superstardom by the early 1970s.

Sly & The Family Stone had the ability to reflect American Black culture at the time like few others did. Where songs like “Dance to the Music” were uplifting, others took a more socially serious tone lyrically such as “Everyday People,” “Stand” and “Family Affair.”

Sly & The Family Stone performed at Woodstock and are the focal point of a long-lost outdoor concert film titled “Summer of Soul,” a documentary project produced by Questlove, recently released.

Today, the Family Stone keeps the music alive, sans Sly, and you can experience them as part of the Labor Day Weekend concert series at the Virginia Beach Oceanfront.

What’s your favorite Sly & The Family Stone song? I put that question out to friends on Facebook. Here’s a few of the picks.

“I was in love with the band right from “Dance to the Music” and Want to Take You Higher,” but I love and will choose “Thank You.” And I’m still knocked out by the band and, of course, Larry Graham. I saw a version of Family Stone in Va Beach and it was so much fun and a night of great music.” — Michael Goldberg, Virginia Beach

“‘Thank You’ because it was so upbeat, positive.” — Burt Robinson

“If You Want Me to Stay”

“Rusty Allen’s bass line to start. But Sly’s vocal, it’s so guttural. It starts out with that falsetto. You can even hear him take deep breaths between the lyrics. Always my favorite.” — Steve Archer, Norfolk

“The build up and the bass line hooked me the first time I heard it.” — Tom Southern, Virginia Beach

“I Want to Take You Higher”

“Ending Woodstock with a magnificent performance of this song just before Hendrix ended the documentary. I’ve watched it zillions of times!” — Yvonne Allmond, Norfolk

“I was in Jr High first year of integration. I began to talk to this Black kid my age about music; he turned me on to Sly & Family. We agreed black and white together make great music, and then I started looking at music and people differently.” — Dan Spivey, Portsmouth

“I took an English class in high school called Black Writers in America. At the end of the year our teacher, Ms. Holup, invited the class to her house and it turned into a dance party fueled by adolescent hormones, soda, and LPs. An indelible memory is my friend and I dancing exuberantly to “I Want to Take You Higher” and feeling so very cool and free. I’m sure the teacher was amused.” — Diane Catanzaro, Norfolk

“Preach. If we don’t finally learn to all live together, humanity is fucked. Print that.” — David Brown, Norfolk

“‘Everyday People’ is an anthem for equality and acceptance of all people; something I thought would not be an issue today but unfortunately it still is…” — Denice Anderton Didio, Suffolk

“‘Everyday People’ — it’s Sly’s version of ‘All You Need is Love,’ it embraces the fact that we are all the same no matter what we do and who we are and we should embrace that concept — plus it has a good beat and it’s easy to dance to.” — Katherine Byrd, Norfolk

“Although I was only 5 years old when my favorite song by Sly and the Family Stone came out, I have four older brothers who, from early on, helped me develop deep appreciation for music, and especially the impactful teaching affect and storytelling of lyrics.

“Born into a very homogenized neighborhood in South Buffalo, and when I was truly able to understand the lyrics rather than just loving the music, I was at first confused by, and later affected by, this song: ‘Everyday People.”’

“In hindsight, obviously 1968 was a time of strife, war, cultural challenges, and confrontational change. Very much like today, in fact. History does oftentimes repeat.

“But for me that history and my cultural segregation was impacted by Sly’s song. Marrying a beautiful funk style (with cowbell!) with timely and timeless lyrics which made me think. And they still do to this day.

“A timely mirror then, and a timely one now.” — Phil Smith, Chesapeake

“Although the single didn’t hit the top of the charts like its predecessor, “Everyday People,” this song and its namesake album are among the defining musical moments of the summer of ’69, an incredible time for music, culture and for me as a 17-year-old between my junior and senior years of high school. The recording is pure funk that popped out of my stereo and AM radio with a rhythmic force that matched its uplifting, empowering, ultimately positive and hopeful lyrics:

‘“Stand! In the end, you’ll still be you

‘One that’s done all the things you set out to do.’

“Man, that was my plan at seventeen.

“Hot Fun in the Summertime”

“‘Hot Fun in the Summertime,’ released just after their Woodstock performance, is the quintessential ‘feel good’ summer song. Every time I hear this tune, it takes me back to the days of peace, love and happiness. Rolling Stone magazine ranked the song #247 on their list of the 500 Greatest Songs of All Time. Drop down the top of the convertible and crank it up!” — Ray White, Virginia Beach

“It was the first time the band really jammed on record. Coming in at about 14 minutes. Nothing they did sounded like it. It also showcased how entrenched they were in the blues. Greg Errico’s drum solo at the end is one of the few drum solos you’ll here on soul and R&B recordings. More, I really don’t think it was a planned solo. Spontaneous. At least to me it sounds that way and much of the song was improvised.” — Jae Sinnett, Carrollton

“Everybody is a Star”

“Short and sweet with great vocals and a terrific message for all. My fav.” — Jack Armistead, Norfolk

“Love Sly Stone, so much great music but ‘Family Affair’ has such a special vibe for all the weirdest reasons; Sly and his sister dueting, tape saturated to hell due to never-ending overdubs; Sly all but gone due to substance abuse, Billy Preston on keys helping a friend out; one of the first beatbox/drum recordings;  recorded in a camper/tour bus serving as Sly’s studio. And Sly’s vocals.” — Shawn Bolling, Virginia Beach

“The first one is just pure funk. ‘Family Affair’ just grooves and I love the spoken part.”  — Dave Blevins, Portsmouth