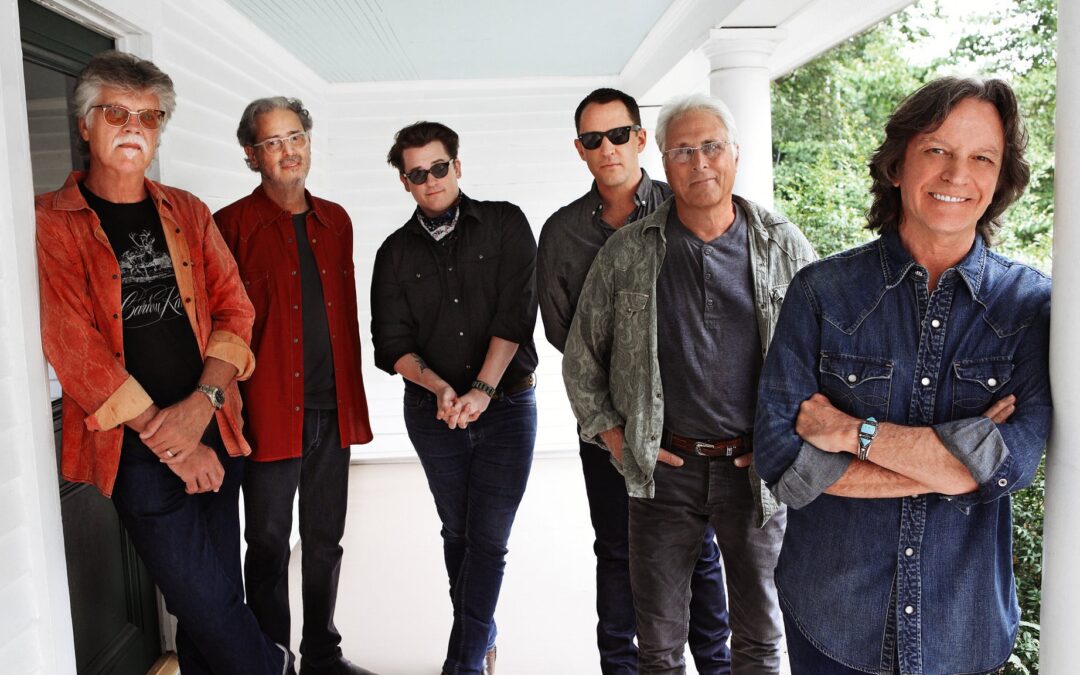 Consider one measure of The Nitty Gritty Dirt Band’s longevity and relevance: the group of California kids playing in a jug band scored their first big article on a page alongside The Byrds and The Doors in Tiger Beat magazine.

Sure, Tiger Beat loved their Paul Revere and the Raiders and other teen idols. But, there were no walls putting artists in silos, no sub-genres of sub-genres labeling them. The Nitty Gritty Dirt band played gigs with everyone, The Doors, Buffalo Springfield, Jefferson Airplane, Hourglass with Gregg and Duane Allman, and even Jack Benny. Another youngster named Jackson Browne was an early member of the band. So they ended up in Tiger Beat, on a page saved by founding member Jeff Hanna’s mother.

“Being from Southern California, there was no genre,” Hanna says during an hour-long conversation from his home in Nashville. “It was like everything was everything.”

In many ways, that hasn’t changed for the group. More than five decades down the road, they still don’t slip into simplistic bins. Country. Folk. Rock. Pop. They’ve scored hits on a variety of charts with originals like Hanna’s “Fire in the Sky” and “I’ve Been Lookin’ and covers like “Mr. Bojangles” by Jerry Jeff Walker and the concert favorite “Fishin’ in the Dark” by Wendy Waldman and Jim Photoglo, who joined the group a few years ago.

Hanna’s drive to perform and write hasn’t slowed at 74. Nor has his exploration of new music. He mentions Old Crow Medicine Show, Jason Isbell, Katie Pruitt, and Alison Russell, out with a stunning solo debut after time with Birds of Chicago, as current playlist favorites. “I’m constantly being turned on to and exposed to great music,” he says, though he adds that the 1970s run of Carole King, Joni Mitchell, Jackson Browne, James Taylor, and their contemporaries is hard to beat.

But that first volume remains a watershed, introducing two walled-off audiences to each other. The seed was sown when they met Earl Scruggs and he offered to record them. “His boys were fans of the band and Earl heard John (McKuen) play that banjo and he was really impressed,” says Hanna, who was 24 when the album was recorded. “He really, really had a lot to do with getting the ball rolling.”

They’d opened for Merle Travis. He was in. So were Maybelle Carter, Roy Acuff, and Jimmy Martin, all aging country stars blended with the long-haired hippies (as Acuff called them) from California. Each track on the three-album set, recorded 50 years ago this month, was a first or second take. “It was a combination of elation and fear, like don’t screw up because, as you probably know, that record was recorded live,” Hanna says. “For those gearheads out there, direct to quarter-inch analog tape.”

“There was this let’s kick the doors open a little bit more in the sort of bluegrass, country, acoustic, roots, music,” Hanna says. “That was kind of a mind-boggling thing. If you told me years later that I was going to actually be able to get it in a van or on a bus and go make a living playing this music and that we were going to get to hang out with and befriend people like the Scruggs family and the Carters later on, which led to the Cash’s, that we just admired so much …But we got to do it. Crazy. It’s still crazy looking back on it.”

When they began, Hanna was 18. Fellow founding member Jimmie Fadden was 17.  The Jim Kweskin Jug Band with Geoff and Maria Muldaur was their Beatles. They would hitchhike or borrow a parents’ car to head north from Long Beach to Los Angeles to see Kweskin and artists like Bill Monroe, Mississippi John Hurt, and Doc Watson at The Ash Grove. Or to drive south on Highway 101 to the Golden Bear in Huntington Beach.

One weekend, he’d be surfing, the next he’d be watching Hurt. Eventually, the band played those places, opening for Merle Travis at The Ash Grove and The Lovin’ Spoonful at the Golden Bear, for instance. “Everybody was coming through,” he recalls. “Even though we weren’t kids from Mississippi or Memphis, Tennessee, or Houston, we were exposed to all this great blues. I mean we got to open for Lightnin’ Hopkins one week. So it was remarkable. And we were also playing with bands like the Buffalo Springfield at these festivals, early in the world of festivals.”

Those kids started fast. They were signed a record deal in 1966 and scored a Top 40 hit in 1967 with “Buy the Rain for Me” appearing on Johnny Carson’s Tonight Show. It was a fertile time in southern California, though, and they quickly developed their sound. “We were really lucky to be thrown into that, because we were just honing out thing,” he says. “I think as we got older, and we got a few miles under our belts, we got better at what we did. And by the time the 70s, late 60s rolled around, we’d kind of shifted from the jug band.”

Then The Byrds made “Sweethearts of the Rodeo.” “A lot of us went, well, that’s right in our wheelhouse,” he adds, “because we were all Everly Brothers fans and our band had some bluegrass elements already. And so the country thing was a natural shift for us.”

That shift accelerated with their pop hit, “Mr. Bojangles.” Hanna heard a snippet on late-night FM radio driving home from a rehearsal one night, but didn’t know the title. He described it to the guys the next day. Jimmy Ibbotson, a guitarist and singer in the band then, said he had a scratched 45 in the trunk of his car. They learned it, but their way. “We weren’t as deeply invested in Jerry Jeff’s arrangement. We were in a certain kind of a groove,” he says. “So we just applied our thing to it and sang some harmonies where Jerry Jeff’s was more of a solo performance. We were lucky to be the guys that had the hit with ‘Mr. Bojangles,’ the top 10 single. Never saw that coming. In fact, when we were making that record, that wasn’t the song that we thought was going to be the breakout single.”

While Hanna and Fadden are original members, the band has rotated others in and out. Bob Carpenter joined in 1979 and remains. John McKuen, another founder, left in 2017. Jaime Hanna, Jeff’s son, and Ross Holmes, who had played with Mumford and Sons and Bruce Hornsby, hopped on board in 2018. Jaime Hanna had played with The Mavericks (his first show was before 100,000 at the Prince’s Trust) and had been in a duo with McKuen’s son, Jonathan, that fell victim to record company mergers. He played in Gary Allan’s band for a dozen years before diving in with dad and the Dirt Band.

Having a son in the band “can go either way,” Hanna says. In their case, it went the right way. Jaime jumped on the bus to hang out during a 2018 run through Florida. Along the way, they talked about him joining in on the encores. But Carpenter suggested he play the full show. “Jaime was like I know this music. I’ve been listening to it since I was a baby,” Hanna recalls. “So it was perfect. It was great. Right from the jump, it was great.”

Their run through the Sandler Center on Sept. 5 will be their first bit of extended touring following the pandemic pause. They played a Jerry Jeff Walker tribute in Texas in June with Jimmy Buffett, Rodney Crowell, Emmylou Harris, and the 90th birthday boy, Ramblin’ Jack Elliott. “We were just so joyous, like a bunch of kids in one of those bouncy houses,” he says.

Hanna knows that there are songs fans expect to hear every night that they’ll play every night. It’s not a chore, even after thousands of shows. “When you’ve been playing as long as we have, there are certain songs we play a lot of times,” he says. “But, the fuel and the inspiration for that music is really what we get back from the audience. When you see people grinning, or singing along, it’s a pretty profound moment.”