CLASSICAL MUSIC: From Boston with Glee 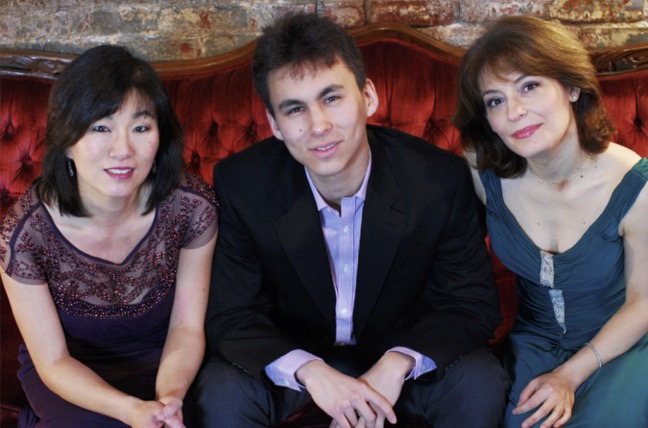 In the course of one telephone chat she chuckles, chortles, laughs out loud, and generally gives forth most every vocalization of amusement north of a giggle and south of a guffaw.

It’s hardly surprising that she calls the first piece on the Trio’s September 20 Feldman Chamber Music Society concert at the Kaufman Theater in Chrysler Museum “A ray of sunshine.”

That’s Haydn’s 1794 Piano Trio Number 35, inC Major, which she describes as “typically a key of optimism and happiness… this piece is that…Haydn in a very good mood.”

After the Haydn they play a “Gorgeous, gorgeous,” late-in-life Gabriel Fauré piano trio – Opus 120 – that she calls “this beautiful melancholy sea of water.” (When it comes to melancholy, Park’s early years taught her something.)

The concert wraps up with Johannes Brahms’ very first piece of chamber music, his Piano Trio No. 1 in B major, Op. 8, composed in 1854 when he was 20, then revised in 1891. Brahms famously “burned a lot of” his earlier compositions, because “He never wanted future generations to know his weaker work,” she explains, but almost uniquely. “He made [this] huge revision and kept both.” The Trio will play the later version, which she calls “a masterpiece.”

Born in South Korea, Park lost her dad when she was 10. (She had, by then, been playing piano for half her life.) Within 3 months her paternal grandmother, whom she says was a crucial maternal figure for her, also died. Then “My mom decided to completely change her life. She had a sister here in Massachusetts.” Her mother decided that “It would be too much to bring all 4 of [the children] to the United States so she only brought me. All in about 8 months.”

Asked how music comforted her through those stressful times, as one online biography mentioned, she emailed “As long as I can remember, I hear and see music in my head constantly. There are even nights when I cannot sleep because the music in my brain is turned up so loud that it’s almost deafening. But it was this constant companionship with it that carried me through those difficult years and beyond.”

The story has a happy ending. “My three younger siblings did come over to the states two years after my mom and I arrived here,” she wrote in an email. “They also play instruments, specifically violin, viola, and cello. For a time, we performed concerts as the Park Family Quartet.” She was “about 14-18” when that Quartet was active.

She made her public debut soloing with the Boston Pops at 15. Since then she’s racked up the honors and awards and prestigious positions and reviews: Harvard Artist-in-Residence and multiple recipient of the school’s Certificate of Distinction in Teaching award, faculty at MIT and New England Conservatory Preparatory School, Founding Artistic Director of Halcyon Music Festival with a history of globe spanning concerts earning comments such as “unusual artistry and musical imagination,” and so forth.

The Trio joins her with violinist Irina Muresanu (Arthur Foote Award from the Harvard Musical Association) and cellist Jonah Ellsworth (another prize winner from HMA), each sporting the same sort of reviews that Park does.

Ellsworth is not only the youngest of the group, already hailed as a world class cellist and likened to Yo-Yo Ma among others, but he is also Ms.Park’s son. The group “doesn’t say much about it; we’re a professional group and want to come across as such, there’s no nepotism.” There is, once again, Mr. Park’s notable family cohesion.

Ms. Park terms the family dog, YoYo, named by Joshua after “one of his heroes,” Yo-Yo Ma, her “third son.”

A gleeful note our chat. Asked to devise and answer some question she’s rarely asked. “About my second marriage…I’m ecstatically happy!”