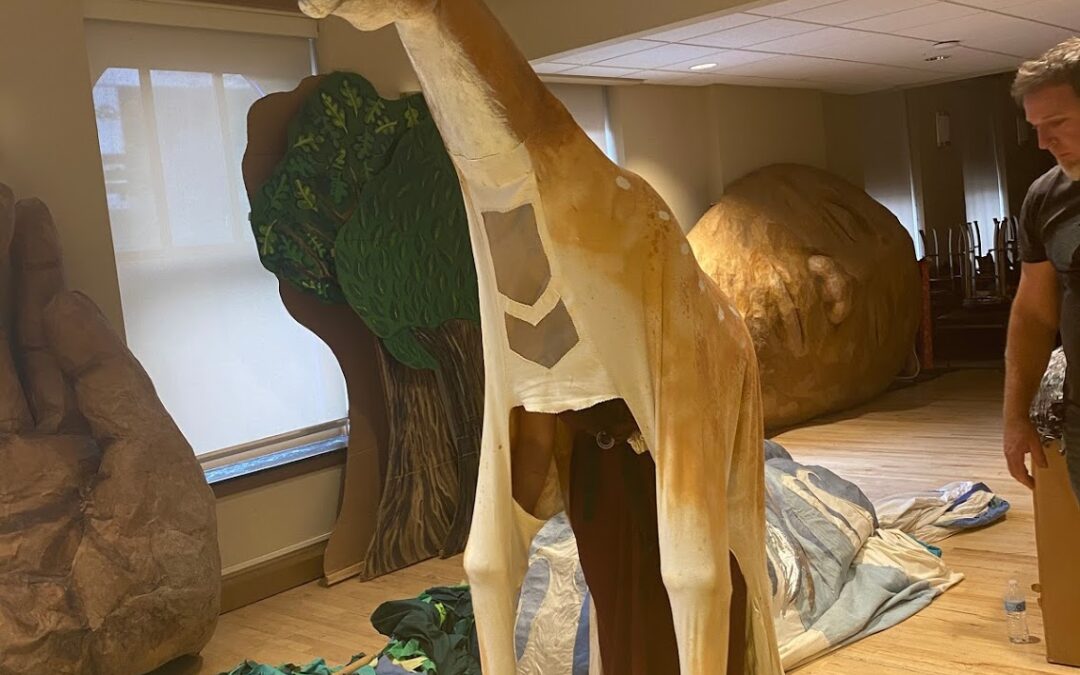 (Puppets, including this giraffe, featured in Earth Remembers were built by Black Light Puppet Theatre.)

A hip-hop history of Hampton Roads, a one hour song cycle wrapped with spectacle, pageantry, projections and massive puppets, featuring a cast of dozens of professional actors and community members, hits the Wells Theatre stage August 13 through 15.

It’s the COVID delayed, 2-3 years in the planning, world premiere of The Earth Remembers, especially commissioned by Va Stage’s Public Works initiative, with book and lyrics by Ronvé O’Daniels and music and orchestration by Jevares C. Myric.

(Powerful examples of their work on YouTube make it abundantly clear why Director of Public Works Patrick Mullins picked O’Daniels and Myric. “Some of their work is fire,” Mullins said in a phone chat.)

Anthony Mark Stockard, who has built the Norfolk State theatre program into an award winning, nationally recognized powerhouse, co-directs the piece with Mullins. Stockard’s Parchman Hour and Mulllins’ Romeo/Juliet, both seen in past seasons at VSC, stand out among decades of regional productions as important and memorable.

Starting with the creation of the universe and then promptly settling into the colonization of Virginia, The Earth Remembers “jumps around” (Stockard) through “historical moments as they are told in song. We focus on theatre that comes out of those moments.” Stockard points out that The Earth Remembers concentrates on the opening of historical and social doors, rather than how and why they were closed.

After “Where the Seeds Plant,” which Stockard calls “a sort of ‘our origins’ story,” it touches on the first arrival of African-American slaves in “Deep Waters,” and on tobacco, with “I Gave You Profit.”

“Tables Turned” is about an unexpected, almost unfathomable way that the story of two of the first twenty slaves here became a microcosm of what has been called, elsewhere, “The Peculiar Institution” of American slavery.

There’s even a “Commercial Break,” voiced by the character called Mother E by her friends. Of course, that’s Mother Earth herself. 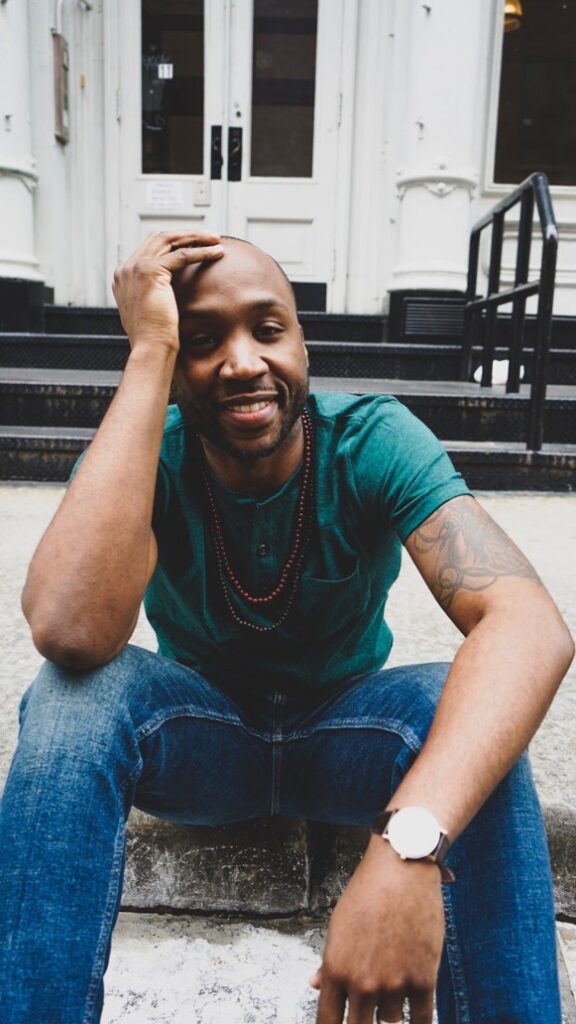 Celebrating the diversity of the Southeastern Virginia region, The Earth Remembers involves a huge team – cast and crew, according to Mullins, number in the mid-80 range. In his words, “It’s not just written about this region but it’s also performed by the people of this region.”

Stockard is handing the singers and actors who give voice to the song cycle. He’s a tenured professor, accomplished director, and a classically trained Shakespearean actor who can articulately hold forth on the distinction between rap (commercial, marketable) and hip-hop (rooted in “years of development of music in America…storytelling…shared communal expression.”)

What Myric and O’Daniels write are catchy show tunes in the vein of hip-hop.

Mullins, a 15-year mainstay of VSC’s programs with directing, acting and scripting credits that have earned him admiration for brilliant innovation and inspiration, directs the pageantry, the puppets by frequent VSC collaborators Paperhand Puppet Intervention, and especially the multitude of local groups woven into the production.

Public Works Virginia, an initiative of Virginia Stage Company under Mullins’ direction, works with a baker’s dozen of regional community partner organizations – Access Virginia, high school students, senior citizens, the military, the Y, the Kroc Center, people who are blind and low vision, the deaf and hard of hearing, and others “to engage the people of Hampton Roads by making them creators of theatre rather than spectators,” according to VSC’s website.

All people have the right to theatre, not just to watch theatre, but to the tools of making theatre,” Mulllins said at a workshop production – a minimally staged try-out, one might call it – of just the song cycle of The Earth Remembers some weeks ago.

In addition to ongoing artist-in-residence programs with local groups, Mullins said that “once a year [Public Works Virginia] invites all our communities to come together and create one audacious piece of theatre along with professional actors… [W]e work together to blend the lines between professional and community and create a big ol’ theatre piece, that’s bigger than any of us ever imagined!”

The Earth Remembers is that big ol’, audacious theatre piece.

Stockard says that it is, in part, a “look at what makes living in Hampton Roads special,” but that it has a grand “core,” or perhaps a framework, that he credits to the co-authors’ insight: “We as human beings might remember and forget things, but the history of the world is embedded in the world itself. The earth holds a permanent imprint; the earth remembers where we all come from.”

The show closing song is called “No Place Like Home.”

A World Premiere at the Wells Theatre