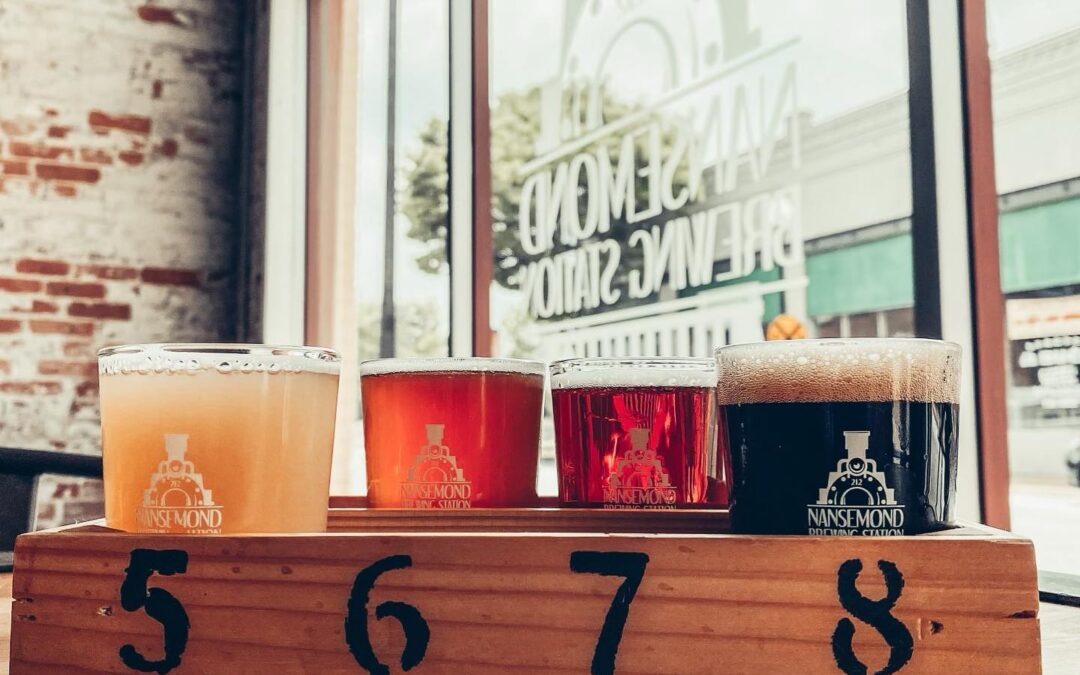 (Sample a variety of beer styles in scenic downtown Suffolk at Nansemond Brewing Station. Photo courtesy of the brewery.)

Locals may know the Nansemond River, that the Nansemond Native American tribe lived along the river, or that Nansemond was the shortest-lived city in Virginia but is now merged with Suffolk. What some may not know is that Nansemond nomenclature lives on at the Nansemond Brewing Station in downtown Suffolk. This small brewery is producing some of the finest beers in the region. Surprising Suffolk indeed!

The Nansemond Brewing Station opened in September 2019. The yellow brick storefront building has been home to many businesses since it was built in 1914, including an auto dealership, a check cashing business, and the brief-lived Brick and Mortar Brewery. According to Head Brewer Chris Richards, “Downtown Suffolk has seen a real transformation in the past couple of years with some great new restaurants and shops, with all the local charm of a small town. The brewery is open seven days a week so we are always ready to serve people while they explore all that Suffolk has to offer.”

The location could not be more small-town America. In addition to the local shops and restaurants Chris mentioned, a railroad museum and a peanut museum are within a short walk of the brewery. The Suffolk Center for Cultural Arts is a short drive and features national touring acts and regional favorites. The Great Dismal Swamp’s northwestern border is a couple of miles away and many of Nansemond’s beers are named for places and events in local history. The brewery tasting room has an historic feel, and there is a smaller back room as well as an outdoor patio. The occasional trains on the nearby track blow their lonesome whistles as they chug past the Nansemond Brewing Station. Contrary to rumor there is no firm requirement that you chug your beer when this happens.

Head Brewer Chris Richards has ample brewing experience at Starr Hill, St George Brewing Company, and Aphrodite’s Rock, the first craft brewery in the Republic of Cyprus. He has a Diploma in British Brewing Technology from Brewlab and a General Certificate in Brewing from the Institute of Brewing and Distilling, both UK-based. At a recent tasting of beers at the brewery we found much to love. From lighter lagers to a mole stout, Chris can brew a range of styles and his experience shows. These are some of the finest beers in our region, with strong attention to quality.

Chris and Assistant Brewer Marcus Raschke brew at MoMac Brewing in Portsmouth also, as MoMac is under the same ownership. However, you will not see the same beer at both breweries.  Each serves only beers brewed on premises and the recipes and styles are distinct. Chris and Marcus are busy brewers and the results are outstanding.

At Nansemond Brewing Station you’ll find clean, true-to-style renditions of classic beer styles, sometimes these serve as a base for creative culinary-inspired beers with fruit, honey, nuts, spices, or herbs. The brews may use newer hops varieties like cashmere and enigma or an unusual “Philly sour” yeast originally scaped off the bark of a dogwood tree in a Philadephia cemetery and cultured at the brewing sciences lab at West Philadelphia’s University of the Sciences. Many of the beers pay homage to place-names associated with Suffolk and the nearby Dismal Swamp. While the specific beers on the twelve taps and in cans to take home may vary, these are examples of what we found on a recent visit.

It’s Always Sunny in Suffolk, billed as a sour IPA with “Wildbrew Philly Sour Yeast” raspberries, and blueberries, was a tasty tart but balanced beer that made our hearts feel sunny. Swamp Rose is a sour ale brewed with blueberries and hibiscus flowers that looked as beautiful as it tasted. Birra Del Obici Italian Pilsner is a clean and quaffable tribute to the Suffolk-based Italian-born founder of Planter’s Peanuts and philanthropist, Amedeo Obici. Jericho Ditch Dunkel is an easy drinking German style brown lager. Traditionalists will want to try the Swamp Grass Double IPA and Pump Trolley Pale Ale, both commendable. We didn’t get to try Oh My Godwin Strawberry Lemonade Hard Seltzer with a touch of glitter, but who doesn’t love glitter? A wonderful New England style IPA called Firefly Lamp is as good as any we have had, with citrus, pineapple, and melon notes, lots of hops flavor, but relatively low bitterness. We were intrigued by the name. Apparently, the firefly lamp is a coveted item in a Japanese role playing game. However, the original firefly lamp according to local lore represents the spirit of an Indian maiden who disappeared into the Dismal Swamp the night before her wedding. Her grieving lover saw the flickering light and crafted a white birch bark canoe to find her; he never returned from the swamp either. Could their spirits still be out there? This legend was immortalized by Irish poet Thomas Moore:

“But oft from the Indian hunter’s camp,

The lover and maid so true

Are seen at the hour of midnight damp

To cross the Lake by a fire-fly lamp,

And paddled their white canoe.”

We can learn so much from beer!

On the other hand, scientists explain the flickering lights as methane, or possibly fireflies. Maybe order a White Canoe Belgian Wit at Nansemond and now you have a conversation starter that may intrigue your seat-mate. Or drive them into the swamp, you never know.

Another big hit of a beer may surprise you, it is Bee-Nut Brown Ale, co-branded with regional favorite Hubs Peanuts. The beer also includes honey sourced from small producers, including Bee Sweet Farm and St. George Brewing’s hives. Just about everyone we have turned this beer onto has enjoyed it while exclaiming “I didn’t think I’d like a peanut butter beer.” This popular beer is now a year-round offering at Nansemond, available on tap as well as in cans to take home. Other things we like about this brewery include friendly people, taster sizes are available by the glass, and there are several beers with 5.5% ABV or lower alcohol to choose from.

Nearby restaurants include Amici’s (amazing pizza and beer varieties), General Public (right next door, wings and creative bowls), Harper’s Table, (upscale Southern), and Baron’s Pub (regional favorite). You can bring food to the brewery or enjoy something from the food trucks on weekends. Need a place to stay? The Pinner House and the Truitt House are nearby mansions converted to bed and breakfast accommodations, and there is a Hilton Garden Inn on the Nansemond Riverfront.

The weekend of September 24-26 Nansemond is having their Two-Year Anniversary/Oktoberfest bash and releasing a new Oktoberfest lager dubbed “Geisgerbahn,” which is German for Ghost Train. Attend this event and you will learn the story behind the name! Also check out their Facebook page for events like music, comedy, trivia nights, and yoga. Nansemond Brewing and downtown Suffolk is closer than you think! From Ghent = 20 miles, 26 minutes. From Mount Trashmore = 30 miles, 37 minutes. From Hampton Coliseum = 30 miles, 35 minutes.