MUSIC: Back on the Road with Blackberry Smoke 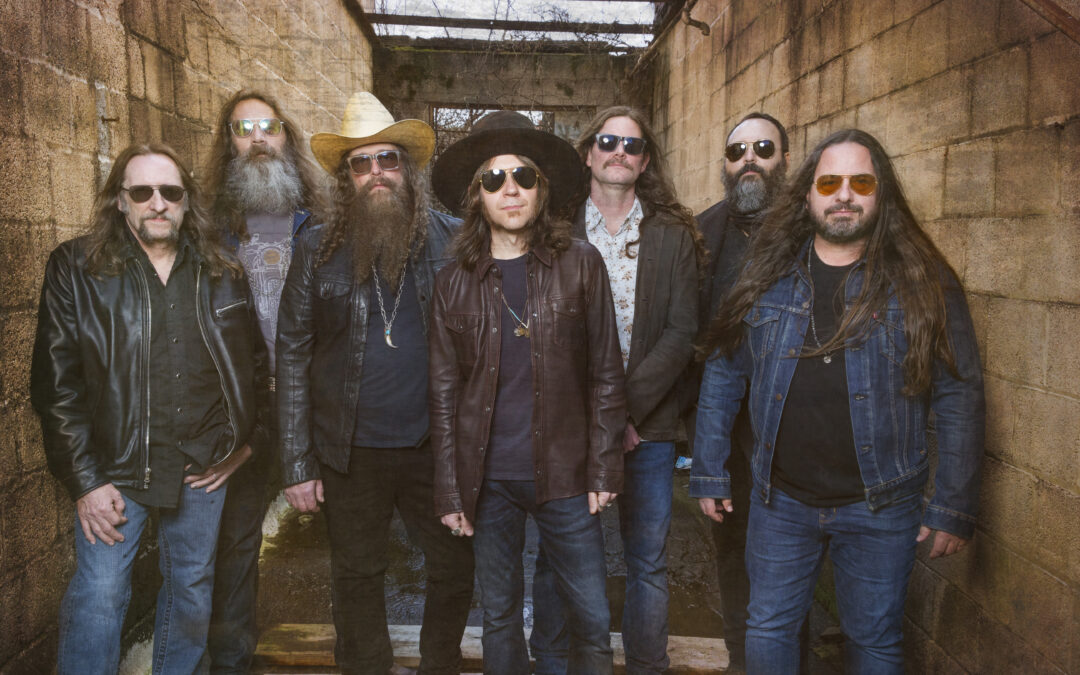 For Charlie Starr, the frontman of Blackberry Smoke, being off the road after two decades touring — and making a living — with his band was the hardest part. But, after the waiting, the band and their brothers are back night after night on the road with the Allman Betts Band and The Wild Feathers behind another hit album, “You Hear Georgia.”

“We’re going to really have an enjoyable summer,” he says by phone from his home in Georgia a day before hitting the highway for a show in Pennsylvania. The “Spirit of the South Tour” hits Portsmouth’s Atlantic Union Bank Pavilion on Saturday, Aug. 14, although without the Allman Betts Band that night.

During an interview, the affable Starr talked about the ups and downs of the past 15 months, his songwriting partners, and making a hot new album in just ten days.

Veer: You started playing bars and have been on the road for 20 years. You were forced, in essence, to break that habit.

Starr:  It was tough. I like to be at home with my family. That’s great. That’s about all I liked. I didn’t like, you know, not making a living really. So that was tough for everyone, not just our band.  But we were able to get together and make a really good album, I think. And while we were in the studio, that was actually a great way to stop thinking about what was going on. It was a nice distraction because you’re focused on making a record. But the downside to that was it only took 10 days to make the record. And we were right back at home.

Veer: You worked with Dave Cobb, who seems to have produced every great country and Americana album in recent years. What was different working with him?

Starr: Just his demeanor and his work ethic and, you know, he doesn’t strive for perfection. If we were making a Steely Dan record, we might spend 10 months on it instead of 10 days. A lot of things on the record are first take, because there’s passion in that take, even if it might not be the most perfect thing you’ve ever heard musically.

We’re a rock ‘n’ roll band. We’re not looking for perfection. But even if you second-guessed yourself and said, I think I can play that a little better, which I did say a couple of times, he would say, Are you crazy? That sounds great. Why would you want to redo that?  I love this about Dave. He wants to capture the spontaneity and not necessarily the complete perfection, which kind of plagues the music business these days, I think, with autotune, and with the using a click, and trying to make everything just so. I’ve said it a million times, my favorite album in history is “Exile on Main Street” by the Rolling Stones. And it is far from perfect.

I think it’s the little imperfections that our ears love to hear, you know, that little bit of grease and movement that happens in rock and roll music.

Veer: I wanted to ask a boilerplate question about your evolution, what music you grew up loving, and how that’s changed over the years?

Starr: I grew up in a small town in Alabama with rock and roll radio. It was in the late 70s, into the 80s where there was tons of Southern rock and roll on the radio. Lynyrd Skynyrd and The Allman Brothers and Marshall Tucker and Charlie Daniels. But my sister loved Huey Lewis and The News and Duran Duran. My sister is four years older than I am. So you kind of gravitate towards what your older siblings listen to. So I loved that. My dad loved and he still only loves bluegrass, bluegrass, and traditional country music and not even all country music because he’s very religious. And so he’s not trying to sing George Jones drinking songs. Hank Williams is kind of accepted in bluegrass music because he was so pure, you know. But other than that, they like to keep it Bill Monroe, Stanley Brothers, Flatt and Scruggs, and gospel. But then my mom loved the Beatles, and the Stones, and Bob Dylan. So there was a whole lot to choose from.

I got my first electric guitar in 1983. So, right then and there, of course, I’m going to play Van Halen, and Black Sabbath. And Led Zeppelin and Aerosmith. You know, I don’t think that I picked up the guitar and was like, I want to learn how to play “Freebird.” As I got a little further into my teens, I think when you really hear those first Skynyrd or Allman Brothers albums and it’s really profound.

I was watching my oldest son one day. He’s 25 now, but when he was about 16, he started really getting into guitar. And he got into Eddie Van Halen and Randy Rhoads. And I thought there’s gonna come a minute here soon, that you’re going to find the beauty of “Jessica,” by the Allman Brothers Band by Dickey Betts and the way that he plays that. You probably will love that as much if not more than “Crazy Train.”

Veer: You had some co-writes on this album. Warren Haynes, Keith Nelson, and Travis Meadows, who played here a few years ago. Was that part of the lockdown or just reaching out to different folks to get different perspectives?

Starr: It was part of lockdown. Some of those people like Travis I’ve been writing songs with for a long time. We just kind of clicked years ago. And so we just continue to do it every year. The songs with Warren, and Keith, and Nick Perry those were all locked down kind of things. That happened quite a bit, being locked down, and friends getting together, and saying, hey, you know what, let’s write some songs. Got nothing else to do.

It’s never with the intention of hey, I want to write a bunch of songs with people for the Blackberry Smoke album. Nothing like that. It’s really just creative. And in those (songs), I really liked them and played them for the guys. And they’re like, that’s great, let’s record them. Just little happy accidents.

I had a bunch of songs written already other than those. So Dave and I and the band just looked at a pile of about 20 songs and picked our favorite 10.

Veer:  Warren Haynes has been around forever. You probably listened to him when you were just starting the band.  What’s it like for you to sit down with him?

Starr: It’s very surreal. It was very surreal to get to know him in the first place, and travel with both of our bands. We played a lot of shows with (Government) Mule. And Warren’s always been great and always gracious and, and from the very beginning, from the first time I ever met him, he showed an interest in what we were doing and was really giving, you know, musically to me. He would let me come and sit in with them. He is completely and utterly dedicated to music. When we decided over the phone, hey, let’s write some songs, I felt very honored. When I hear it now, when I put it on, it gives me goosebumps to hear him play and sing on something that we created.

Veer: It strikes me that several songs on the album are about people getting out. There’s one about a veteran coming back and not being able to deal.

Starr: That song was inspired by spending time with a friend of mine, who is a veteran, and he’s had a rough go of it as far as PTSD goes, and he can barely leave his house. And so that just kind of, I don’t know that that sparked the idea. But I definitely didn’t think I need to write a song that makes a statement. You know what I mean? It just happened.

Even though people call it a quote-unquote, a Southern Rock band, there’s not a rulebook that says you can’t write about that. I definitely don’t have any interest in writing a protest song or writing about politics. I think I do have a lot of songs that talk at least metaphorically about what’s kind of going on in the world today. Or at least how ridiculous it is. I saw a meme yesterday that said, Jesus doesn’t need to take the wheel at this point. He needs to pull over and spank some of y’all with his flip-flops. That. I can get behind writing a song like that. Right. Come on, what is going on?