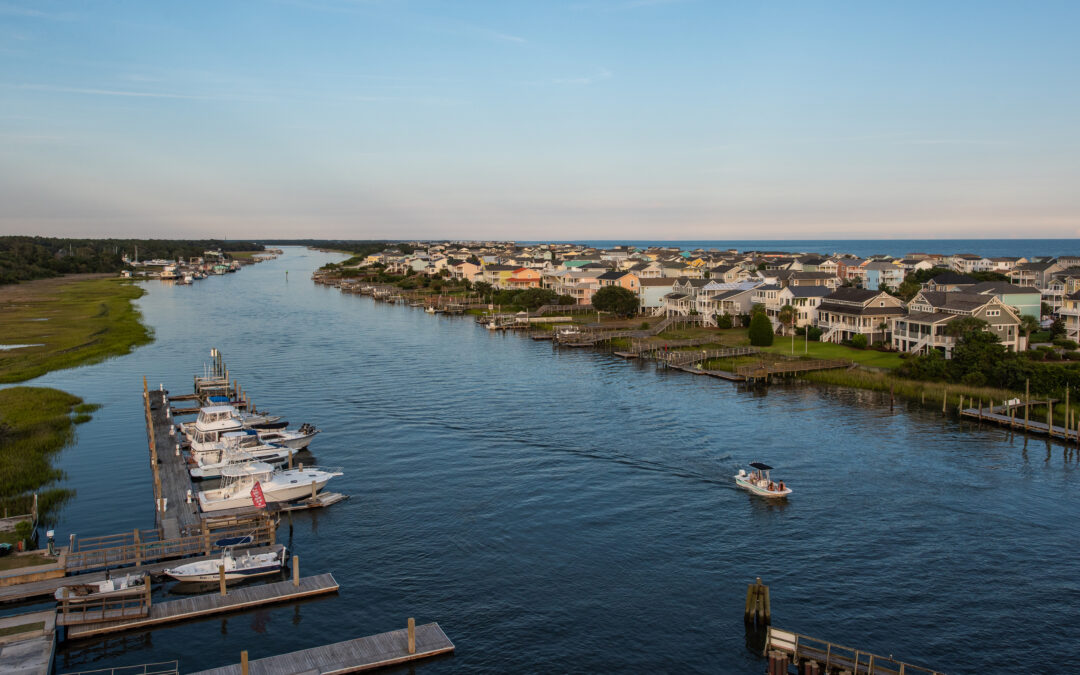 Bursting at the seams, back window blocked by boogie boards and beach chairs, our car rises above the North Carolina barrier island on a flyaway bridge over the Intercoastal Waterway, bound for our family’s beach rental. From this elevated perch, turquoise, pink and yellow houses spread out below in pixelated patterns running along the shore. Ahead lay summer reading and reflection, too much alcohol, fried seafood, and a life tied to tidal cycles. As my dermatologist can attest, this beach week tradition goes back over 60 years for me and stretches through resort towns running the length of the mid-Atlantic coast.

In recent years, this tradition has taken on a more somber tone, given my day job as apocalyptic appraiser of climate change. The occasional family conversation fantasizing about owning our oceanfront rental trails off in my presence. Evening talk on beachfront balconies increasingly asks how much longer this house, this street, this island has left?  My mental yardstick is constantly appraising the tide lines 30 and 50 years out.

Every year, the storms ride on top of water that is just a little higher. The big ones roam a little farther north atop increasingly warmer seas. Leather skinned old timers’ remembrances of big, damaging storms no longer reach back decades, but focus on more recent ones as they gesture toward houses being rebuilt atop stilts set at absurd heights.

I’m old enough to have seen almost a foot of sea level rise creep ashore during my time at the beach, and I worry about what happens with the three or four feet that will be added during my kids’ lifetimes.

Mostly I worry about the huge bill that they and everyone else will be paying to clean up the mess that my beach rental fees have enabled over the decades.

In Hampton Roads, the rather cheery phrase, “Living with the Water,” is broadcast by cities to describe a Candy Land stroll through our waterlogged future, involving minimal disruption and spawning an entire new “Water Economy” devoted to coastal resilience. Soggy apartment complexes become water parks and drowning houses are transformed into kayak launches with nature trails, as an army of water workers make a comfortable living installing these amenities, paid for with endless streams of funding. Newly refined traffic apps guide us around flooded streets. Nature-based flood control features aesthetically protect us from the foot and a half of sea level rise we’ve seen over the last century.

But what of the four feet of sea level rise we’ll see this century, as projected by Virginia’s state and local governments?

Growing numbers of coastal storms and river floods compound our concern. Smoke from western wildfires turns North Carolina sunsets bright red, bringing another dimension to our angst.  As risks elevate, the word “retreat” has started to creep into the conversation. Now mostly mentioned by academics and pundits living in dry, safe areas, the word sounds a clear, discordant note, one that none of our region’s cities want to hear, let alone utter.

But the truth is that for most of the mid-Atlantic coastline, facing these projected rates of sea level rise, “Living with the Water,” is really a transition to retreat; a poorly envisioned, chaotic, litigious, expensive, heartbreaking period of change that will redefine our relationship with the sea.

It is also a process for which we are ill-prepared.

There is nothing in our literature, law, engineering, art, architecture, or any part of our cultural makeup that deals with a permanently changing environment. We can confront short-term events like storms, droughts, and even brief mini-ice ages. We can read about Noah and the Ark or the Dutch Boy and the dike. But we have no experience with permanent change on the scale of, “the resort island from your childhood has gone underwater.”

Four hundred-foot swings in sea level have occurred over recent epochs, corresponding with glacial and warm ages, until our wildly changing climate got “stuck” about 5,000 years ago, ushering in an era of un-natural stability. Modern human civilization and culture evolved during this quiet period, able to ignore the full wrath of nature, leading to the hubris that marks our domination over the environment.

But Nature merely slept as we thumped our chest. The smoke from our forge awakened Her and we take daily measure of just how powerful a beast now roams the Earth.

Trying to stay ahead of the tide, we reach for the simple tools we developed during the quiet times: sandbags and seawalls, pipes and pumps, roads and houses raised higher and higher in the air.  We make grand plans that please engineers and terrify accountants.

Coastal communities tinker at the fringes of the problem; not wanting to admit to the future we’ve begun to glimpse they walk a knife’s edge; expressing caution and offering short-term solutions but avoiding panic (and never using that “r” word). If they begin aggressive action, the holdouts, doubters, and shoreline profiteers raise concerns. A revolt in 22 coastal North Carolina localities forced the state to stop publicly discussing its higher rates of sea level rise. Then, when the Town of Nags Head tried to remove beach rentals that rising seas had put in the breakers, they were rebuffed. Taking those flooded houses out cost millions of dollars over more than four years, including a trip to the state supreme court. Adding insult to injury, the Town had to pay those homeowners for rental income lost while they were arguing.

But the larger challenge is how to deal with the dreams and aspirations of those folks living in those turquoise, pink and yellow houses along the oceanfront. They are innocent victims of this unforeseen shoreline change.

Accents in these southern coastal communities reveal a longshore drift of people down from New York and New Jersey, as retirees invested here and escaped from the pricey shore up north. Our beach rental brings $350 daily into the pocket of the owner for whom our beach house is a business. Who wants to tell these people that they need to abandon their houses, their dreams, and their income to prepare for a reality that is decades off? And if we tell them to move, they’ll all want to be recompensed for the loss of their imagined future, leading to the question that triggers our paralysis: Do we have enough money to make all of them whole?

Unable to resolve this, we work on sandbags and seawalls, pipes and pumps, live with the water a little longer to buy some time, hoping either the beast goes back to sleep or, deus ex machina, someone comes up with a solution.

As always happens at the shore as the week wears on, the tethers to pre-vacation reality slip. The ocean wears a calm blue disguise and the fevered daydream of my grandchildren wreck-diving on the remains of our beach rental gradually fades. I slowly sink into an unworried, unhurried world and become part of the problem my workday self struggles to solve.

By the end of the week, I’m thinking this would be great place to rent again next year and read on the beach, drink gin and tonics, eat fried seafood, and ponder the future.

Skip Stiles is Executive Director of Wetlands Watch in Norfolk.