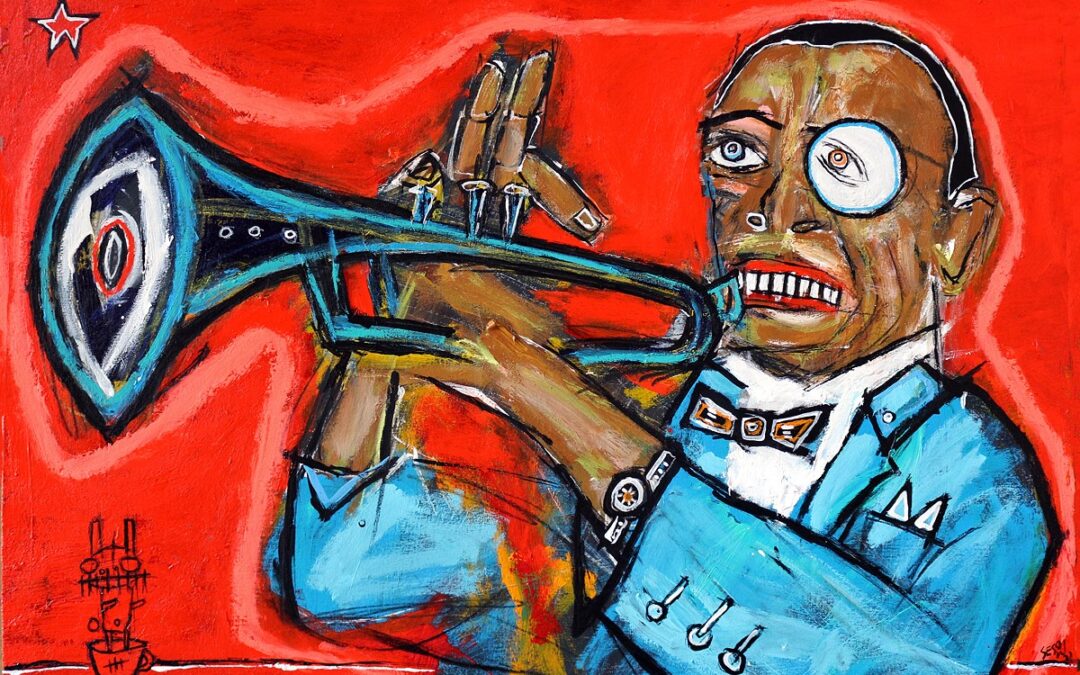 (Trumpeting: “I created this painting at my studio in downtown Washington, D.C. after a stay in Norfolk and learning about the history of the Attucks Theatre.”  — Matt Sesow)

Everyone, it seems, has heard of Matt Sesow even if they don’t own a painting by him, though it also seems everyone has one—or three—of those.  And that is by design.  As Sesow says, since he makes his sole living by selling his art, he is fortunate that he enjoys the marketing and selling as much as the making.  With no painting priced over $1K and most far less than that, the prices for these paintings are intentionally set within most everyone’s reach.  But their magnetic appeal extends far beyond their price tag.

If you ask some people how they ended up in their current line of work, they might joke, “I lost a bet.”  Sesow, however, might quip, “I got drunk.”  In 1994 this university-educated software developer/engineer, with a 10-year career working for industry giants like IBM, picked up a paint brush with some art school friends and had a few beers.  He painted images from a local free paper in D.C. “making it up as I went along.”  His version of the-rest-is-history? “Everyone else stopped and I kept going.”

By 1996, after continuing to paint and self-educate in D.C. museums—finding inspiration in the likes of Francis Bacon and Willem de Kooning—Sesow set up his work at a festival in Georgetown, but sold nothing all day until the very end when a woman bought virtually everything he had.  She turned out to be an art dealer from Connecticut who carried his work for a decade.  That was the same year he saw the movie Basquiat about the short life of world-renowned street artist Jean Michel Basquiat, a driving influence on him.

In 2001, Sesow left his computer career to paint full-time.  Ultimately acknowledging that art gallery goals “were different than mine,” he recognized his personal need to “keep creative and keep relevant…without gallery deadlines and pressures.”  He figured that his work ethic, business experience, programming knowledge, marketing acumen, and origin story would propel his career.  And he was right, having spent recent decades developing collectors around the world, exhibiting nationally and internationally in over 150 shows, and selling to fans directly from his website, www.sesow.com.  At last count, Sesow has sold some 8,000 paintings. 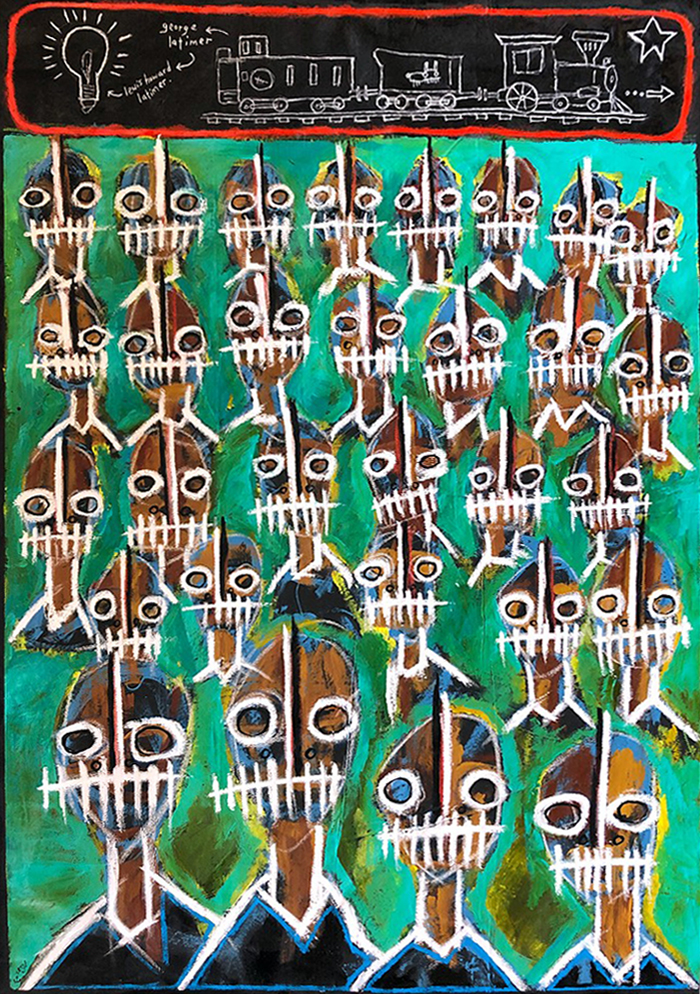 (Underground Railroad: “I created this painting on the ODU campus while staying in Norfolk, Virginia. It represents the history of Norfolk and how George Latimer escaped via the underground railroad on a ship headed to Baltimore in 1842. Latimer had a son,  Lewis Howard Latimer, who went on to help discover and invent better filaments for the light bulb, an evaporative air conditioner, and an improved toilet system for railroad cars.” — Matt Sesow)

Recently, I was joined by the prolific and engaging artist in the Baron and Ellin Gordon Galleries at ODU via Gordon, a telepresence robot, for a preview of Sesow’s upcoming exhibition.  Joining us for the gallery visit were Cullen Strawn, ODU’s executive director for the arts and curator of the show, and David and Phil Liebman, collectors who lent work to it.

Now about that origin story: Life and Limb is a direct reference to a childhood game turned tragic one evening near an airfield in rural Nebraska.  Someone would call out numbers, and the kids raced for corresponding balls.  Sesow, age 8, thought it would be a funny trick on his friends to turn and run the opposite direction.  And he did, running straight into the moving propellor of an incoming plane that severed his left arm and ultimately cost him his hand.

His paintings—bright, bold, and energetic—have been part of a healing journey.  Some see them as angry and aggressive, others as joyful and hopeful.  Regardless, processing the past while confronting the present—including politics—has resulted in a huge body of widespread and wildly popular work.  It is largely populated with human and animal figures, recognizable for their style, color palette, “Sesow smiles,” and personal iconography.  For the ODU show, one group of paintings features mermaids or “sirens,” ships, and captains.  Though germane to the local community, these symbols carry both personal and universal meaning.  The captain, for instance, symbolizes for Sesow a positive “taking control” and “forward-looking” stance.

Hand-drawn like custom wallpaper on the gallery walls are some of Sesow’s most frequently used icons which also appear in the paintings, sometimes next to his signature as a marker in time:  trauma scars, bunnies bearing trauma scars, trauma cups—“pour bad things in the cup and move on”—rising and descending phoenixes, one-winged birds, and many more.

Find them all and lose yourself in Life and Limb this fall.