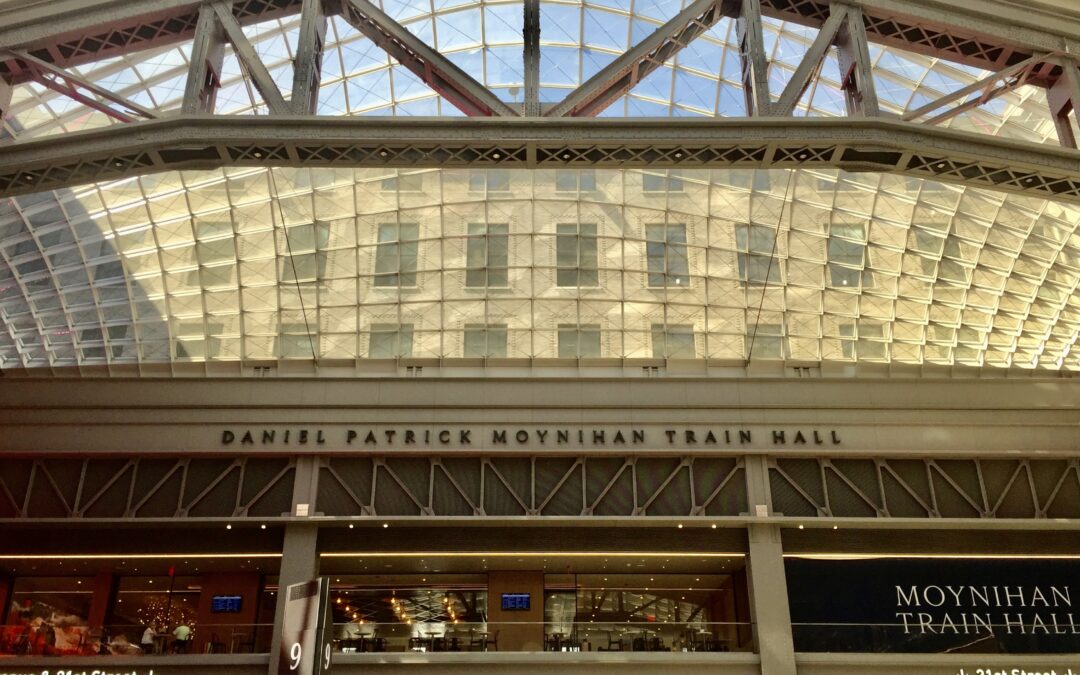 Late last month, I spent a week in New York City. It was my first visit to my hometown since 2018, and in the days leading up to the trip, I had a lot of mixed emotions. On the plus side, I was looking forward to spending time with my daughter, who lives on Manhattan’s Upper East Side, and a few old friends. But other considerations had left me feeling apprehensive. For one thing, my last visit was a bit disheartening. Walking the streets three years ago, I had an acute sense that the city in which I grew up—the city that shaped my sensibilities and is thoroughly intertwined with my identity—no longer existed. It wasn’t simply that so many of my old haunts had closed; the city seemed to lack the same kind of energy—the same sense of soul—that was once so radiant. I couldn’t help wondering whether the pandemic had been the last nail in the coffin.

On the train ride up, my emotions were heightened by a book I’d decided to take with me: Pete Hamill’s delightful volume Downtown: My Manhattan, a blend of memoir and history. Two things spoke to me right off the bat. The first was his recollection of seeing Manhattan’s soaring skyscrapers for the first time, when he was 5, from the pedestrian walkway on the Brooklyn Bridge.

“What is it?” he asked his mother as he gazed at the skyline.

This charming exchange brought back memories of the sense of wonder I’d had as a child, when seeing Manhattan from afar. In my case, it was usually from the deck of the Staten Island Ferry, not the Brooklyn Bridge—but I, too, remember thinking that it was every bit as magical as Emerald City had seemed to Dorothy and her friends when they caught their first glimpse of it.

The other of Hamill’s observations that rang true for me is that New York is “the capital of nostalgia.” One reason for this, he says, is “the abiding sense of loss that comes from…continuous change…. What seems permanent (in New York) when you are twenty is too often a ghost when you are thirty.”

As I noted earlier, I’ve known this feeling all too well over the years as I’ve watched so many of the sanctuaries of my youth—pubs, clubs, concert halls, bookstores and shops of all kinds—disappear to make way for Starbucks, bank branches and cell-phone stores.

This sense of loss was especially acute a year after 9/11 when I visited ground zero for the first time since the towers had fallen. I’d seen them rise—they were completed when I was a junior in high school—and had always been in awe of their majestic presence, their super-fast elevators and the spectacular views from the observation deck. Standing at the site after they’d fallen, I could scarcely wrap my mind around the reality that where once had stood these monuments to human aspiration, there was now only empty sky.

And yet, as Hamill notes, “to talk about [loss] without cease would be to live as a bore. New York teaches you to get over almost everything.”

In that spirit, I was interested in experiencing New York as it is now.

WHEN I ARRIVED at Penn Station, I was immediately impressed with the new Moynihan Train Hall inside the formidable old Beaux Arts building that used to serve as the city’s main post office. I don’t remember the old Penn Station—it was demolished when I was 7—but I’ve seen plenty of photos, and by all accounts it was an architectural gem. Its replacement, on the other hand—a much smaller station buried under Madison Square Garden—was a grim affair. Moynihan Train Hall, which opened earlier this year, is a vast improvement—an airy space with a sweeping glass-and-iron atrium that is clearly meant to pay tribute to the original.

After venturing outside, it dawned on me that I’d arrived at rush hour and that getting a cab would be no easy task. Squeezing onto a subway car with luggage would have posed its own challenges, of course, so I started walking. In spite of my long absence, it seemed all so familiar, with one exception: almost everybody was still wearing masks, even outside. (As of late June, they were still required on subways and buses, though not in most stores and restaurants, and certainly not on the streets.) This was understandable, given the devastating toll the virus had taken on New Yorkers. But it seemed to me in some ways that it had gone beyond a temporary measure. I got the feeling that people had grown attached to their masks—and this too made sense. After all, in some respects, New Yorkers have always worn masks of a kind when out in public.

Over the next few days, on the other hand, I noticed a strange sort of counterpoint to the mask-wearing, especially when I went out for smoke breaks on the stoop of my daughter’s building. Although it’s a relatively quiet street, there was a steady stream of pedestrians, day and night, and many of them gave me friendly nods as they passed. Some even said hello. This, of course, is standard behavior in many other places, including Norfolk, but New Yorkers have long been conditioned to avert their gazes when passing strangers. I couldn’t help wondering whether these expressions of human connection were responses the trauma inflicted by the pandemic.

There seemed to be, in fact, a general sense of exuberance, in the streets, bars and restaurants. An old friend of mine confirmed this.

“The last six weeks have been like popping a champagne cork,” he observed as we sat on the rooftop deck of his Upper West Side apartment building.

That night I also experienced a moment of kismet. My friend and I had been reminiscing about a Seder he’d hosted at his apartment some 25 years ago. Actor and comedian Jerry Stiller and his daughter Amy (Ben’s sister) were among those present, and I’d enjoyed sitting next to Amy that evening. An hour after reliving that memory, we headed out to a nearby restaurant, and, lo and behold, there was Amy, chatting with a friend on a restaurant patio. We took another turn down memory lane—this time with her—and in that moment, I was struck by the sense of continuity that New York was offering me, in spite of all the changes that have occurred.

Indeed, I felt this sense of continuity again and again—at the Metropolitan Museum, where my favorite Hudson River School paintings are displayed just as they were when I first laid eyes on them; at Strand Bookstore, which was bustling with shoppers, as it has been every time I’ve stopped in over the last 40 years; at my favorite bars in the Village—and yes, even at Citi Field, where I saw the Mets come back to beat the Phillies in the bottom of the ninth. Never mind that the old Shea Stadium was long gone. Citi Field sits right next door, and listening to some kids behind me chant, “Let’s Go Mets!”—just as I had when I was their age—was reassuring.

ALL OF THESE IMPRESSIONS stood in stark contrast to news reports I’d seen since the pandemic began—reports about how crime in New York is “out of control,” how homeless people are “everywhere,” and how the economic downturn during the pandemic was so devastating that the city would never recover.

These problems are real, to be sure. On my last morning in New York, I got into a conversation with my daughter’s landlord and remarked that it was nice to see the city bouncing back.

“I wouldn’t say it’s back,” he responded. “I have apartments I can’t rent, or can only rent for a lot less than I did before Covid. The commercial renters are the worst. They’re not paying, so I have to take them to court. But they don’t care about us. They think all we do is sit around collecting checks.”

It wasn’t entirely clear who he meant by “they”—but I sympathized. A few days earlier, at a bar down the block, I chatted with a bartender who moved here from Ireland back in 1985. We reminisced about all the old Irish bars we’d once known—“buckets of blood,” as he called them—and griped about how New York had changed since the ‘80s. The bar where he’s now working had been closed for an entire year because of Covid, but survived because the owner also owns the building.

Crime is on the rise too, as is the number of homeless people. But news reports tend to sensationalize the problem, giving the impression that New York—from the Bronx to the Battery—has become some kind of post-apocalyptic landscape filled with murder and mayhem. “It’s as bad as the ‘70s,” is a common refrain. The thing is, I loved New York in the ‘70s, and I never once felt unsafe, in spite of the real problem of crime in certain areas.

I certainly didn’t feel unsafe this time, and while I realize a week’s stay doesn’t give me the authority to make definitive statements, I will add that I covered a lot of ground—my daughter and I walked 10 miles on the first day alone. During that sojourn, and others during the week, I passed young families pushing babies in strollers, people walking dogs, street musicians bringing smiles to the faces of passersby, elderly people resting on benches, folks decorating for Pride Week—and yes, here and there, people who were clearly suffering from mental disturbances and/or dire financial circumstances. But homeless people were hardly “everywhere.”

THE PROBLEMS I WITNESSED and the irritations I felt were no different from those I’ve associated with Manhattan my whole life: certain subway lines that are oppressively hot and crowded; streets choked by absurd amounts of vehicle traffic, and a lot of things that are grossly overpriced (well, except for pizza, which is a lot cheaper than it is in Norfolk.)

The problems paled, however, in comparison to the city’s assets. Washington Square Park, in particular, was as vibrant with people from all walks of life as I’ve ever seen it. There was a sense of liberation in the air.

My daughter’s landlord may be right: New York isn’t back—yet. But signs of revival are everywhere. And to me that comes as no surprise. The history of the city, after all, is a story of continual setbacks and comebacks. It is and always has been a city in which you’ll encounter ugliness that will make you cringe and beauty that will make your heart sing; it’s a city of greed and generosity, rudeness and kindness, choking congestion and lovely open green spaces. It’s a city, in short, that puts on display the entire spectrum of the human condition—often in dramatic fashion.

That’s not for everyone, I realize. For some people, New York is just too much. To each his own. For my part, this recent trip—unlike my visit in 2018—reminded me that New York will always be the place where I feel most comfortable. It was good to be home and to see it coming back to life once again.