Re-Experiencing The Dark Side of the Moon 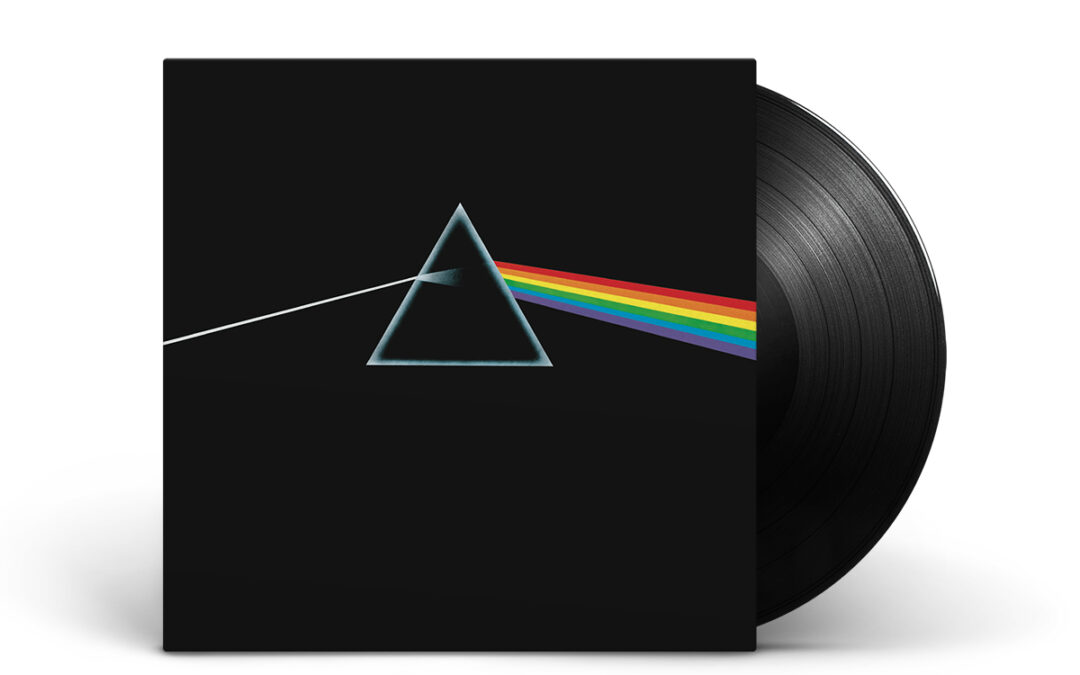 (Pink Floyd’s landmark album “The Dark Side of the Moon” remained on Billboard’s Top Album chart for 957 weeks.)

On July 1, Black Jacket Symphony — a full rock band with strings — will perform Pink Floyd’s landmark album “The Dark Side of the Moon” in its entirety at Atlantic Union Bank Pavilion in Portsmouth.

“The Dark Side of the Moon” was Pink Floyd’s eighth studio album when it was released in early 1973. The progressive rock (prog rock) recording set an epic new tone for the band at a time when wide-band FM radio began to gain popularity with high fidelity quality. This was perfect timing for a new commercial radio format called Album Oriented Rock (AOR). In a nutshell this meant AOR radio stations like FM99 back in the 1970s played the deep cuts on albums, not just the “hits” as AM radio was known for.

Do you recall hearing “The Dark Side of the Moon” for the first time and what did you think?

Mike Arlo:  The first time I heard “Dark Side” I was just blown away. No one had ever recorded ANYTHING like that before. The guitar, keyboards, harmonies, sound effects, and the voices talking throughout the record. Wow.

Ray White: I heard “The Dark Side of the Moon” for the first time not long after it was released in the spring of 1973.  I listened to a lot of radio and one station, I believe it was WNOR FM99, played album sides, and I heard it on their station.  I thought it was an amazing album due to the sonic quality of the record.  The layering of the instruments and dreaming feel of the album was amazing.  My friend had a 8-Track stereo system that played music in Quadraphonic sound.  “Quad”  is the way everyone should listen to this album; it blew my mind.

Mike Beck: I don’t remember the first time I heard “DSOTM.” Probably at a friend’s house. I’m sure I was blown away…by the music.

Barry Friedman: First time I heard “The Dark Side of the Moon” was on WOWI-FM. I immediately hooked

John Brittell: True Story: My first memory of Pink Floyd was from a VBJH math teacher blasting “The Wall” during an exam. I wish I could remember her name to thank her. “Dark Side” followed soon after (for me). Lyrically I found the album disturbing as I was coping with a family member suffering from mental illness and, along with “Wish You Were Here,” it captured the isolation and anxiety of watching a loved one fall into disrepair.

Martin Sneed: I do. Bought it when it came out in 1973. Honestly, I remember my first thought was that it was kind of slow. Didn’t rock enough for me back then. Have come to appreciate it a bit more over the years.

Thanks to the Album Oriented Rock (AOR) FM radio format of the 1970s many of the songs from “Dark Side” became “hits,” though not released as traditional singles. Can you comment on the timing of this commercial radio format and why it was ideal for a band like Pink Floyd?

Beck: The AOR format was created and became a staple of FM radio because of the great popularity of bands who used the album as a complete work of art. Some bands put a hit single as cut one on side one and the rest of the album was filler. A Pink Floyd album was filled with great songs and AOR didn’t have to wait a year for the next single. So I think Pink Floyd was ideal for AOR. I’m not sure AOR would have existed if not for bands like Pink Floyd.

Arlo: I was lucky enough to get into radio as AOR was being invented. Clean signal (No Static At All). Our station even broadcast in stereo and we weren’t playing JUST the hits; there was so much truly great material from so many diverse artists. If you loved music (and I certainly did) it was just the best place in the whole DANG world to work. Playing gems from earlier work, and introducing everyone to the latest from Led Zeppelin, The Eagles, Stones, Fleetwood Mac, CSN&Y, The Who, and the list goes on. “Dark Side”  was a staple for gold tracks in the mid-’70s.

White: Like I mentioned, radio is where I heard new music back then.  Being a teenager, I didn’t have much money.  Along with FM99, I listened to WOWI-FM and K94 here in “Tidewater.”  These radio stations emerged in the early ’70s playing “progressive” rock.  Just a few years earlier, I mainly listened to new music on AM radio, geared towards “pop” music.  The much better sound quality from FM radios opened a whole new world of music listening, plus the songs were getting longer and instrumentation started to equal the value of lyrics in popular music.

Sneed: FM radio was still relatively new commercially at that time. Top 40 had crossed over to FM from AM, but a lot of the FM stations were still  the “beautiful music,” aka elevator music format. The baby boomers had come of age and the music they grew up with in the sixties and early seventies became staples of the new rock format, AOR. That format did not have issues with long song lengths so bands like Pink Floyd, Allman Brothers, Yes, King Crimson, Iron Butterfly, Rare Earth, Jethro Tull, etc. were not restricted to airplay because many of their best songs were five minutes or longer.

Friedman: The songs (on “The Dark Side of the Moon”) were long and didn’t lend themselves to editing which was a perfect fit for the WOWI audience and format.

Does “The Dark Side of the Moon” stand the test of time and why?

Brittell: Absolutely. Lyrically “Dark Side” is more relevant than ever as the world continues to struggle with its themes of isolation, inequity, greed and loss. Sonically it’s still one of the best, if not THE best, engineered rock albums of all time, with Alan Parsons bringing a Rudy Van Gelder level of quality to the mix. Arguably the Clare Torry vocal solo on “Great Gig in the Sky” persists as the most emotionally heart-rending performance in modern pop music.

Arlo: “Dark Side” was one of the best engineered, and produced albums of all time. The performances were pretty stellar as well.    For my 10th anniversary with the radio station I was given a Sony compact disc player (a rarity in early 1985). I was also given a copy of Springsteen’s new CD, “Born to Run,” and the digitally remastered “The Dark Side Of The Moon.” I took it home and when everyone else had gone I plugged in my headphones, listened to the first 6 minutes or so and “Time” began with the clocks ticking. It was soooo clean and crisp I felt like I could hear every clock in that shop. Now I had listened to and played that song hundreds of times by then, however when the clocks (loudly) began to chime I jumped and nearly shouted out loud.

Beck: Absolutely. “DSOTM” is one of the greatest albums in history, commercially and artistically. The music is beautiful, complex and timeless. The themes of the lyrics are powerful. Even when they have no words, like “The Great Gig in the Sky.”

White: The album today is still one that is consistently towards the “top of the list” for popular music today.   With sales of over 45 million worldwide, younger generations appreciate the musicianship and integral qualities that the album provides.  Bands like Black Jacket Symphony and over a dozen more tribute bands, dedicate their shows towards the timeless music of Pink Floyd and especially the “The Dark Side of the Moon” album.

Friedman: Because the production standards were so high the recording still sounds fresh and timeless.

Sneed: It stands the test of time. It is a nice mix of rock and psychedelic..

How popular are songs like “Money,” “Time,” and “Us & Them” still today with your listeners?

White: The most popular songs on the album — “Money,” “Time and “Us & Them” — are still favorites of our listeners today.  Our Sittin’ In With The CAT syndicated radio show|podcast features new songs from classic rock bands.  They are always requesting the latest from Pink Floyd members David Gilmour and Roger Waters, who still release new material today.  Of course, we reconnect our audience to the “classics” that made them the elite of the rock music era and those songs certainly withstood the test of time.

Beck: Hugely popular. Many great songs from the early ’70s have faded in popularity, but not the “Dark Side” songs.

Does “The Dark Side of the Moon” continue to sell well on vinyl or CD in your record store?

Sneed: “The Dark Side of the Moon” is the top selling and most in-demand Pink Floyd title at Vinyl Daze Records.

Brittell: Very! From a sales dollar perspective it remains AFK’s #1 selling product of all-time. From a unit perspective it’s bested only by Fleetwood Mac’s “Rumours.”

Friedman:  The CD has continued to sell, but the vinyl sales have gone through the roof. It continues to be extremely popular for people getting back into vinyl. Because of the great music and outstanding sound it is one of the first purchases customers make for people buying turntables or pulling out their old turntables.

Any additional thoughts on the album?

Beck: Everyone knows the whole “Wizard of Oz” connection. But a friend of mine showed me a trick back in the day. You play “On the Run” at the same time as the break down section of “Whole Lotta Love.” The result is mind-blowing. As “Whole Lotta Love” ends, the clocks from “Time” begin. There is something really weird and special about this album. It’s one of my top five albums all time.

Friedman: It is amazing how this music continues to impress new listeners as well as old fans.

Arlo: Black Jacket does an amazing job recreating ”Dark Side of the Moon.”  I saw them a couple years ago at the Sandler Center — Wow.

NOTE: We dedicate this article in memory of Sean Brickell.