MUSIC: Abbie Gardner Steps Out While Red Molly on Hiatus 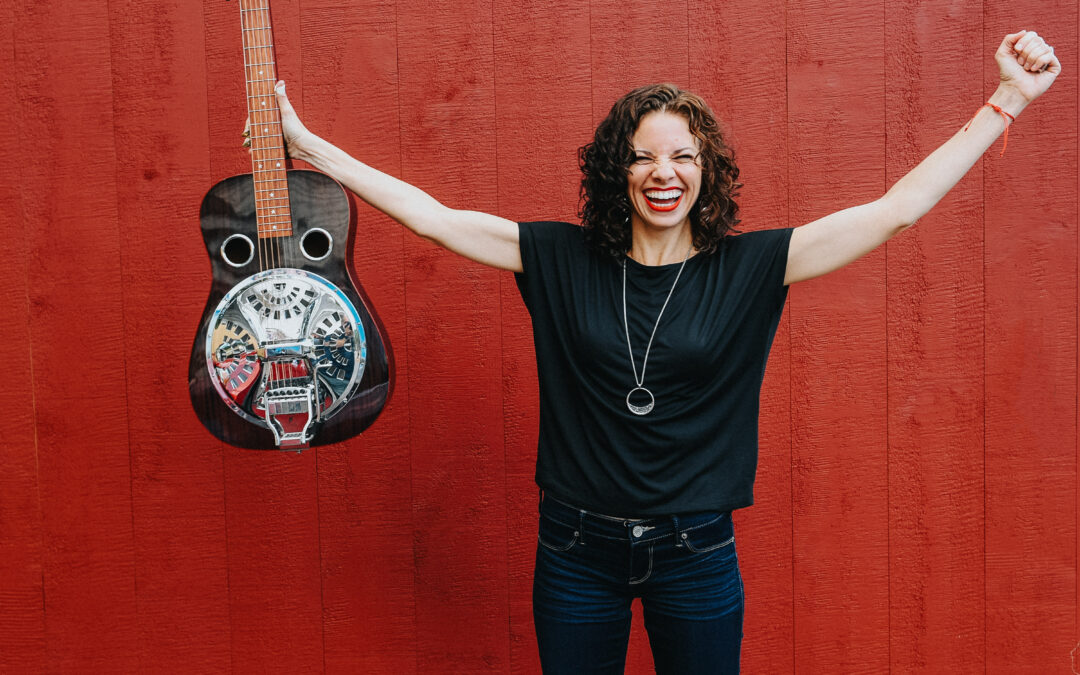 Like so many artists, Abbie Gardner discovered not doing shows for a year led her down some unexpected paths. She set up a home recording studio. She created a TV studio streaming shows regularly with her handy rhythm section, her husband, Craig Aiken, a bass player. She taught songwriting online. And she created a Patreon page, which not only helped pay the bills but spurred her to create on deadlines.

“That’s really been one of the best things that came out of this time,” she says. “The regular steady habit of creating music and videos and content for people who like my music.  I’m responsible for delivering that stuff and showing them my process, week by week…It puts a value on it and it starts to feel like, oh, this really is a job.”

Gardner is one-third of Red Molly currently on hiatus.  So she is headed out solo for her first shows since the arrival of the coronavirus, including a stop at the Virginia Arts Festival’s Bank Street Stage on June 26.

Festivals, as it happens are a sort of career catalyst for Gardner. Her father, pianist and trombonist Herb Gardner, swung with a long roster of jazz greats including Gene Krupa, Roy Eldridge, and Red Allen. She grew up playing classical flute and going to bluegrass festivals because that was how her mother could get her father to go on vacation. It turned out that she and her mother liked bluegrass better than her father.

Gardner auditioned for music school but wasn’t admitted. “So I kind of rebelled against my musical family by going into healthcare,” she says. “I went to college (to study occupational therapy). My parents thought I was wasting my life.”

After graduation, she took a job, but soon quit to become a folksinger. “My parents were so proud,” Gardner says. But practicing her guitar the wrong way gave her tendinitis. She had to stop strumming. At just the right time, a bluegrass festival offered an answer. She was watching the Dobro master Jerry Douglas play at the Grey Fox Bluegrass Festival in 2004 when her old profession met her new profession.

She went to the booth where they were selling Dobros and ordered one delivered that week. By the end of that week, she was camping at the Falcon Ridge Folk Festival. Gardner, Laurie McAllister, and Carolann Solebello were the last ones at a song circle. “We fell into this three-part harmony,” she recalls. “They convinced me to take the Dobro out and I was messing with it and just faking it. By the end of the weekend, we were thinking, you know, let’s do this again sometime. This was fun. Let’s try it out.”

Red Molly was born, named after a character from Richard Thompson’s “1952 Vincent Black Lightning.”  “It was a crazy two weeks of changing my entire life,” she says. “And I didn’t know it at the time.”

As a solo artist, she touches all points of the musical compass. Her most recent disc, “Wishes on a Neon Sign” slips easily from a twangy ballad to a jazzy Norah Jones burner to a zydeco-inflected stomp. It features three co-writes, one with country star Chris Stapleton before he broke out, one with the late Nashville songwriting legend, David Olney, and one with Red Molly mate, Molly Venter. Her range reflects the eclectic music of a childhood growing up in New York and listening to Ray Charles, but also Led Zeppelin and Billie Holiday.

She credits producer Michael Beller, who has worked with Amos Lee, for sitting down with her and working on what groove fit best in each song. “It is really nice to feel like when you go into a diner and they offer Italian food, but they also offer Greek food and basically, how do you have all the food back there? ” she says. “I feel fortunate that I’m able to have all these different styles to choose from, to suit different moods. The point is to get a story across or a feeling across. And it’s really nice to have all that all those different flavors to work with.”

Her session with Stapleton is another story. Gardner had won a songwriting contest and the prize was a trip to Nashville to write with a Music Row regular. But she wasn’t interested in creating the next country radio hit. She asked to be partnered with someone in bluegrass like Darrell Scott or Tim O’Brien.  They weren’t available. Stapleton, then still with his band, The Steeldrivers, was. “I was thinking, that’s perfect. I love his stuff,” Gardner recalls.

But it was one of her first co-writes. She was terrified. She took a bunch of ideas from her journal and they started working. “He was so nice and very patient,” Gardner recalls. “I was a newbie.”

She ended up changing the second verse and adding a bridge for the version on the album. “That was an amazing experience. I still have the recording, the work tape where he’s singing. It’s nothing I’m ever going to share because I wouldn’t want someone sharing my workspace with someone,” she says. “But I just feel so lucky to have this secret Chris Stapleton version of a song that I wrote.”