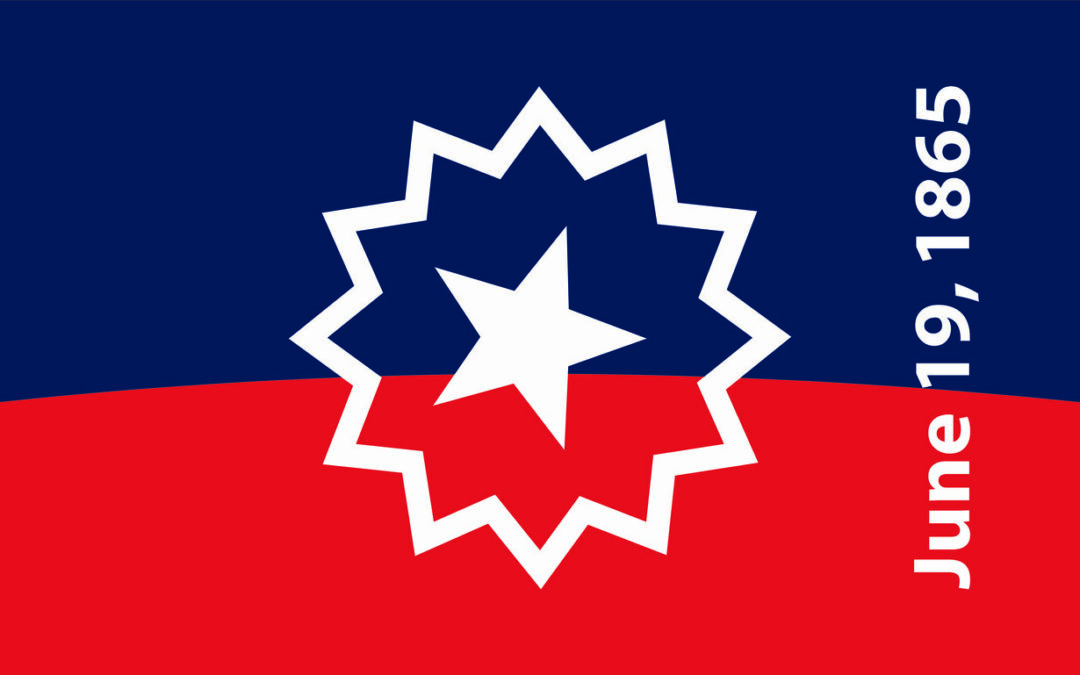 (Juneteenth now has an official flag)

Juneteenth, also known as Emancipation Day and Freedom Day, has now become a national celebration, and there are many throughout the Hampton Roads region.

Following are some of this year’s highlights:

This year’s Juneteenth in Newport News will be a week-long celebration, filled with events and activities for all ages. Some events are virtual, but others have been modified for in-person participation, with social distancing. Activities range from essay and poster contests for children to an outdoor concert at King-Lincoln Park and a Freedom Festival in the Superblock area of Downtown Newport News. Additional events include a conversation with a re-enactor portraying Frederick Douglass about the meaning of Juneteenth; a reading of the Emancipation Proclamation; a tour of The Newsome House Museum and Cultural Center; a Juneteenth production at Downing-Gross Cultural Arts Center; and a meditation walk at Huntington Beach.

The Fragments of Freedom Theatre Productions presents “Juneteenth: Emancipation and Celebration through Spoken Word Theatre and Music,” featuring the talents of spoken word artists and award-winning soul/R&B artist K’bana Blaq. Written and directed by Hampton playwright, Marie St. Clair, this moving and memorable experience will illuminate the origins and meaning of Juneteenth. Spoken word artists from the Hampton Roads area: Dreason Ruckett, L.E.V.I. and Aundre Raashard, will perform their original pieces with actors and singers to share the history, and celebrate the progress attained by generations past and present in the fight for freedom.

Juneteenth Opening Ceremony, 10-11 a.m. Join the Williamsburg community to commemorate, celebrate, and reflect on the Black experience in America at this year’s annual Juneteenth Opening Ceremony on Market Square in Colonial Williamsburg. Keynote address will be given by Professor Robert Watson of Hampton University on the meaning of Juneteenth. This ceremony is free to anyone who wishes to attend and is presented in partnership with William & Mary, The Let Freedom Ring Foundation, The First Baptist Church, The City of Williamsburg, and The Colonial Williamsburg Foundation. The Opening Ceremony is followed by a cookout at Chowning’s Tavern on Market Square, featuring a menu curated by award-winning food historian and chef Michael Twitty. Other highlights as follows:

Juneteenth Celebration at William & Mary, June 19, 2 p.m. The College of William & Mary in Williamsburg will present a virtual Juneteenth commemoration program that will include a performance of “Evolution of a Black Girl” by actress Morgan McCoy; music from such acts as The Gonzales Sisters, The Three Tenors and Matthew Willard; and remarks from university and community leaders. The program will also include footage from the groundbreaking for William & Mary’s Memorial to the Enslaved and a reading of the names of people who were enslaved by the university.

Jamestown was where the first recorded Africans in 1619 were brought after landing at Old Point Comfort and where the first slavery laws enacted in the late 17th century impacted their lives and status. In this thought-provoking 90-minute outdoor program of performance, music and dance, meet African Americans from three centuries who fought against those laws until freedom came. Juneteenth programs are included with Jamestown Settlement admission, but tickets to this limited-capacity event must be purchased in advance to reserve a seat.

Selden Market and Tidewater Waves present a Juneteenth Celebration. Celebrating the freedoms, achievements and culture of the African American community. Visit for a day of music, food, workshops, stories and a market of 30+ black owned businesses for you to support and connect with.

Join Dr. Cassandra Newby-Alexander, author of Waterways to Freedom for a walking tour of Underground Railroad sites in downtown Norfolk. Hundreds, if not thousands, of African Americans made daring escapes to the north via ships visiting Norfolk’s waterways. Learn more about Norfolk’s heritage and implications for the present. The tour begins at Fountain Park. Registration is limited to 25.

Bring the family to the Chrysler Museum of Art to celebrate Juneteenth in partnership with the Virginia African American Cultural Center. Art, music, and activities will honor the African American people, past and present, who fought for freedom. Hot Gumbo Brass Band will perform outside the museum. Attendees can do craft activities in Mary’s Garden and go on a scavenger hunt throughout the museum to see works of art by African American artists. The VAACC will also do a brief reenactment of the Juneteenth story.

The Virginia African American Cultural Center will collaborate with Teens With a Purpose and Tidewater Bluegrass Music Society in providing performances as part of #VBArts on Tour, a community-based pop-up series designed to bolster support for arts organizations reopening in the wake of Covid 19 closures. This event is intended to be celebratory artistic experiences honoring African and African-American culture and freedom of expression.