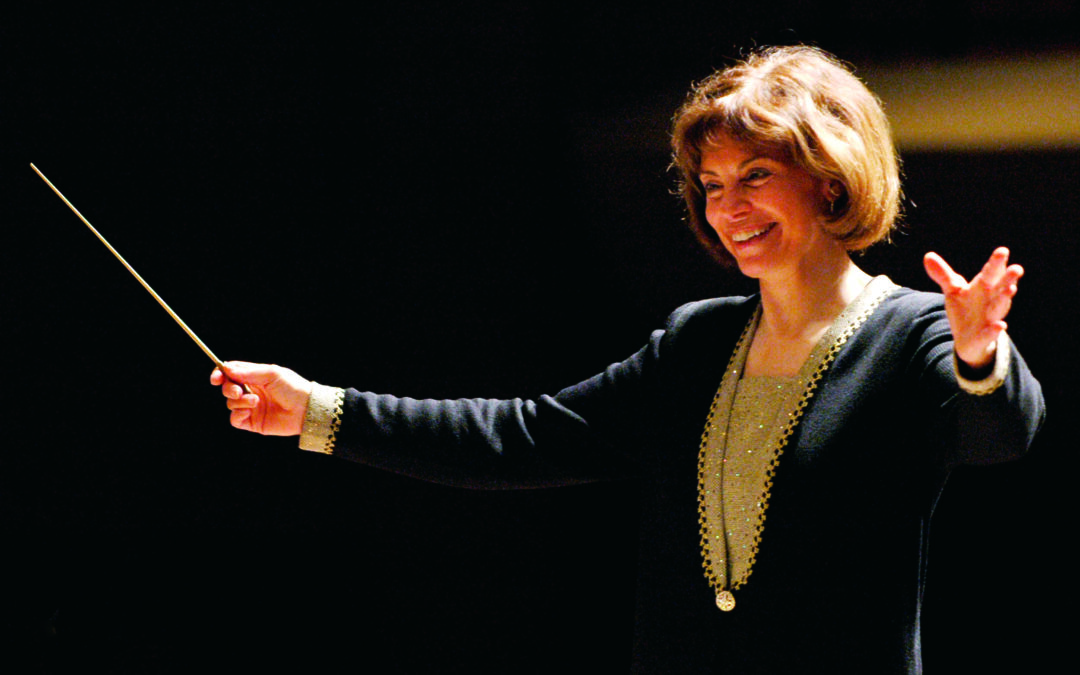 Celebrating Beethoven by polishing off a couple of Fifths, JoAnn Falletta, formerly Music Director of our Virginia Symphony Orchestra and now appointed to the honorary position of Connie and Marc Jacobson Music Director Laureate, finally takes the podium for a performance formerly scheduled for mid-December last year.

While those Fifths are thoroughly intoxicating, they don’t come from some distillery of ethanol but from the genius of Beethoven’s pen, distilling profound emotion to glorious music.

These June 11-13 Virginia Arts Festival concerts replace a program of Beethoven’s 9th Symphony plus his Emperor Concerto originally planned for Beethoven’s 250th birthday, which would have been a postscript to Joann’s 2020 retirement from the VSO.

The 9th Symphony’s requisite big chorus, singing lustily, was not in the COVID cards.

Beethoven’s Fifth Symphony, arguably the most popular, well known and well recognized piece of classical music replaces the 9th. The other “Fifth” is his Piano Concerto No. 5, known by the nickname that (perhaps) its publisher gave it, the Emperor Concerto. JoAnn calls the Beethoven pieces “masterpieces for all time…there is something so perfect about both.” (She discovered, when looking over her Beethoven Symphony score while we were on the phone, that this will be the 50th time she has conducted it.)

She’s been here since 1991, apparently longer than any other conductor or music director in the 100 year history of the variously named Norfolk Symphony/Virginia Orchestra Group/Virginia Symphony Orchestra.

When she announced that she would be retiring as Music Director at the end of VSO’s 2019-20 Season it occurred to all, what a long, strong stay it’s been.

She’s taken our one time local band to Carnegie Hall and Kennedy Center, garnering critical acclaim. She’s earned buckets of international and local awards and expanded the orchestra’s reach across Hampton Roads and beyond. Named the most popular conductor in the world by the online music site Bachtrack in 2015, she was Performance Today’s Classical Woman of the Year in 2019, the first year the award was given.

We’ve been able to bask in the reflected glory of her four Grammy Awards – she pointed out during our chat that “just two” of those were in her name, the other two being for pieces she had conducted – along with ASCAP and other awards. She’s helmed the Buffalo Philharmonic since 1999, and flown some 100,000+ miles per year to conduct all over the world, repeatedly as the first woman or first American to guest conduct a famous orchestra or to hold some prestigious conducting position.

She’s even been featured in a Macy’s ad campaign, “Remarkable You,” spotlighting women in male-dominated leadership roles, and she’s a published poet as well.

When Dr. Falletta – to give her the (never used) honorific to which her Juilliard Doctorate of Musical Arts entitles her – moved to Norfolk, she “was just enchanted with the city. I loved the people and loved the orchestra. It was a perfect place for a young conductor to make music and to grow,” adding that ” there was plenty of room for growth on my part.”

She has hired, by her informal estimate, about two-thirds of the musicians who make up the orchestra today.

She’s a most enthusiastic booster of our region. (With husband of 36 years, computer maven and clarinetist Robert Alemany, she will be keeping the Downtown Norfolk condo where they have lived since ‘91.) She has found that “Hampton Roads is such an open minded and forward looking place. I love that energy of the place.”

She’s quick to thank the orchestra’s collaborators such as the Virginia Arts Festival and the Symphony’s and Festival’s supporters, especially David and Susan Goode and Norfolk Southern, and to enthusiastically cite their support and influence in the “continuum of great, great projects” of Symphony and Festival together.

In this “wrapping up of that long history of projects,” soloist for the Emperor Concerto is Van Cliburn winning pianist Olga Kern, who combines her international career with duties as the Festival’s Connie & Marc Jacobson Director of Chamber Music. She’s been here numerous times in solo and chamber performances, and when partnered with supreme soprano Renée Fleming.

This is the first time that she and JoAnn have worked together; previously scheduled collaborations as far back as 2001, when she had just won the VanCliburn competition, have for various reasons never come to pass.

Kern, speaking via Skype from Moscow, said she was uncertain how many times she has played the Concerto since her first time when she was “about 14,” but noted that she had performed it “in Russia, the US, Europe and Asia.”

“The music takes you to a different world. The structure of the first movement is so grand and so monumental, it’s kind of a piece by itself. The second movement of this concerto, it’s not a long movement, I just want to continue playing it, that’s how beautiful it is. At the end of the third movement the piano and the symphony are playing the same rhythm… going to a really soft sound…like the heart is stopping –  but then suddenly it’s not the end because it’s a celebration and joy – he’s giving the ending part to the piano, these bravura passages, pure happiness in the end!”

There’s a similar progression from darkness to light in Beethoven’s 5th Symphony. In JoAnn’s words, it starts “in a key that is very dark, very nervous and agitated,” but by shifting keys at end, it gives the sense that, “We survived, we lived through this year and everything will be right with the world. It’s like the sun bursting out of the sky.”

E.T.A. Hoffmann wrote of Beethoven’s 5th, “How this magnificent composition carries the listener on and on in a continually ascending climax into the ghostly world of infinity!”

Music critic turned playwright Corno di Bassetto, in 1927, described Beethoven as “the most turbulent spirit that ever found expression in pure sound.” ( C.d. Bassetto wrote for the stage as G.B. Shaw.)

JoAnn’s affection for the orchestra is returned by musicians who have worked with her. Rob Cross, the Festival’s Executive Director and Perry Artistic Director, and VSO Principal Percussionist, says “JoAnn has this ability in a very genuine way, to make whomever she is talking to, feel they are the most important person in the room.”

Rodney Martell, bass trombone and Artistic Administrator of the VSO, and “the first person she hired,” remembers seeing her conduct the night before his audition. He was “struck by her presence…She has an unflagging amount of energy in person and on the podium; that hasn’t changed in the 30 years I have known her.”

Concert Master Vahn Armstrong is another of her hires. “She seems to have sort of an extra sensitive people sense…we talk about how she can tell you things that you don’t want to hear and make you feel really glad that she told you.”

“She has extraordinary people skills. She remembers everybody’s kid…seems to know everybody in the orchestra. That personal touch is remarkable.”

Karen Philion, VSO President and CEO, describes JoAnn as “A brilliant artist…one of the most genuine people I have ever met. I have learned a lot from JoAnn in terms of creating an environment where people can do what they do best. She sets that tone for the whole organization.”

Janet Kriner, a Symphony cellist from 1965 through 2010, once remarked that JoAnn was hired over other candidates, in part, because “we were more comfortable with how she handled the orchestra.” Kriner’s comments on JoAnn include terms like “a delightful lady… warm hearted…a pleasure to work for,” and of course, “Really talented.”

Armstrong: “She’s able to convince people to do things and be happy that you did.”

Philion: “She was a great joy to work with.”

Martell: “She looms in the musical world.”

Kern:  “She’s such a great musician and beautiful colleague. It’s so, so special to me to perform live again and with her on the podium.”

Cross: “Look at the milestones of this orchestra in her tenure – Carnegie – Kennedy –

Kriner: “She will be missed.”

And Falletta, in a stanza from her 2004 book of poetry, Love Letters to Music:

“And I remember mosty this:

That through them I stood

In the middle of miracles.”