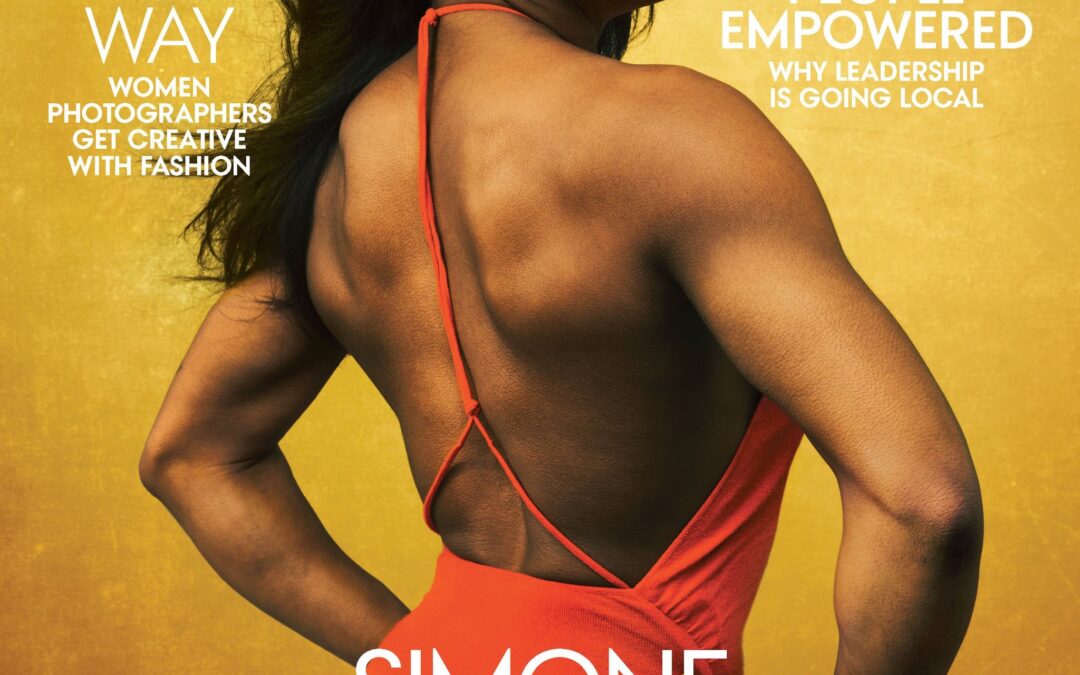 (If the 2021 Tokyo Olympic Games proceed, Virginia Beach’s Simon Biles, pictured on the cover of Vogue, plans to take her newly developed vault to heights unseen.)

“You can’t claim to be good if you have never been tempted to be bad.  You can’t claim to be faithful if you have never had the opportunity to be unfaithful.  Integrity is built by defeating the temptation to be dishonest; humility grows when we refuse to be prideful; and endurance develops every time you reject the temptation to give up.” – Rick Warren

It’s easy to go through life and be totally unaware of one of its most glaringly prevalent aspects – the significant role that competition plays in who we are, what we do, and how we do what we do.  Even before we learn to walk (a competition in itself), the struggle begins.  It’s not always “mama” or “da-da.”  Sometimes it’s “no” or “mine.”  There is apparently something innate that makes even young humans choose conflict as a means of getting their way.  And that’s just the beginning.

Most parents can share stories of all-out combat with their offspring – sometimes minor skirmishes, sometimes nuclear holocaust.  What makes some babies (although barely two feet tall) clench their little fists, and defiantly stomp their little, fat, feet even as parents attempt to impart loving instruction?  It’s a common term “the terrible two’s,” but often, it also applies to the 3s, 4s, tweens, and beyond.  Loving parents invent nice ways to describe the behaviors: feisty, spunky, sassy, bossy, hard-headed, strong-willed, obstinate, stubborn, and a host of others, but they all mean the same thing.  Parents pray they are just “phases” that children go through, hoping time and training will help them come around.  Most of them do, in fact, grow up to be great teens and adults, but those “phases” can be challenging, to say the least.

Through participation in sports, lots of parents realize they can “redirect” the flow of their children’s competitive juices.  The outcomes here can, admittedly, be disastrous, but thankfully, things often work out quite well.  The famous tennis player, Bjorn Borg, once threw terrible tantrums on the court. His mother, as a disciplinary measure, took his racquet away and did not allow him to play until he learned to better control his temper and attitude.  Ultimately, he did learn (apparently quite well), and became one of the world’s greatest players in the history of the sport.  He also became a fine gentleman on (and off) the court as well (though that cannot be said for a number of others).

In their purest forms, sports are not only a wonderful way to allow youngsters to properly develop, demonstrate, and refine their competitive drive, they can also generate a positive self-image, and a much-desired “spirit of the game.”  NBA Hall of Famer (and arguably the G.O.A.T.) Michael Jordan was cut from his high school team.  He not only didn’t quit (was not allowed to), but he worked harder than ever on every aspect of his play until he literally transformed the way the game is played.  He became one of THE most spirited competitors in basketball (and arguably in ALL of sport).

Competitive spirit can be a main ingredient in the making of champions if individuals are willing to stare challenge in the eye and pick up that gauntlet.  One can look at any level of championship performance — Super Bowls to World Cups, Wimbledon to the Kentucky Derby, NASCAR to the Olympic Games.  A number of people have conquered the summit of the highest mountain in the world, Mount Everest.  One of them, Erik Weihenmayer, accomplished this amazing feat, but what made his achievement so incredible is the fact that he has been totally blind since age 13.  One the best distance runners this country ever produced (certainly one of the toughest), Steve “Pre” Prefontaine, made this bold statement: “Somebody may beat me, but he’ll have to bleed to do it.” True competitors realize winning is important, but it is even more important to give your all.

Competition need not apply exclusively to sports.  A willingness to compete is a very desired asset in the business world as well.  Of course, in that arena it is a different sort of race.  In business, it’s usually that race to the top that matters most.  Championship in this realm is often a matter of becoming the biggest, or most often, the one (corporation or CEO) who can earn the most money.  This is the spirit that created long-time corporate giants like Coca-Cola and Ford Motors, as well as the familiar, but relative newcomers, like Microsoft and Amazon.

It is very important that when people look into a mirror, they like what they see.  This is especially true of young people.  That’s why encouragement (in its many forms) is such a crucial element in proper growth and development.  No matter where they live, the world is a competitive place for humans. Certain lessons need to be taught early and consistently, with just the right mix of patience, understanding and caring – always a delicate balance.  In the end, learning to master competitive instincts is basically a matter of knowing and conquering self-doubt, and it can be a daunting challenge indeed.

With careful (and caring) guidance, Bjorn Borg came to realize that he could be an even greater champion if he learned to better control his emotions.  He also learned he could be a better person as well.  There was a huge up-side, and all the benefits of those lessons became his.  Michael Jordan elevated his game by choosing to challenge himself even more.  There were no pity parties from his parents, or anyone else.  Then he even stepped into the corporate world – Nike – and equaled his on-the-court performance.  As another Michael used to sing, it’s all about that “Man In The Mirror.”  No longer was it enough to go one-on-one with an opponent.  He discovered that the ultimate opponent is oneself, so he challenged himself more and more — one-on-two, and even one-on-three.

True competitors learn to constantly push the limits — of “self” –—what THEY can do.  The results are often unbelievable performances.  Simone Biles, raised the bar in gymnastics to a level once thought impossible – even unimaginable. Jeff Bezos, internet entrepreneur and CEO of Amazon, is now the richest man in the world (worth more than $200 billion). The current president of the United States, as a youngster, struggled with stuttering.  Not surprisingly, he was teased mercilessly about it until he was able to overcome the problem.  He claims stuttering is the only handicap that people still laugh about and credits his mother for his amazing improvement.  “Joey, don’t let this define you.  Joey, remember who you are.  Joey, you can do it.”  Biden says, “Every time I would walk out, she would reinforce me.”  Joe Biden didn’t receive professional help for his stutter.  He simply practiced in the mirror for hours on end reciting poetry.  And now he is the president of the most powerful nation in the world.

Records are, indeed, made to be broken, but it all starts deep within the very heart and soul of human beings.