Driving You to Drink: Beer Touring in Hampton and Newport News 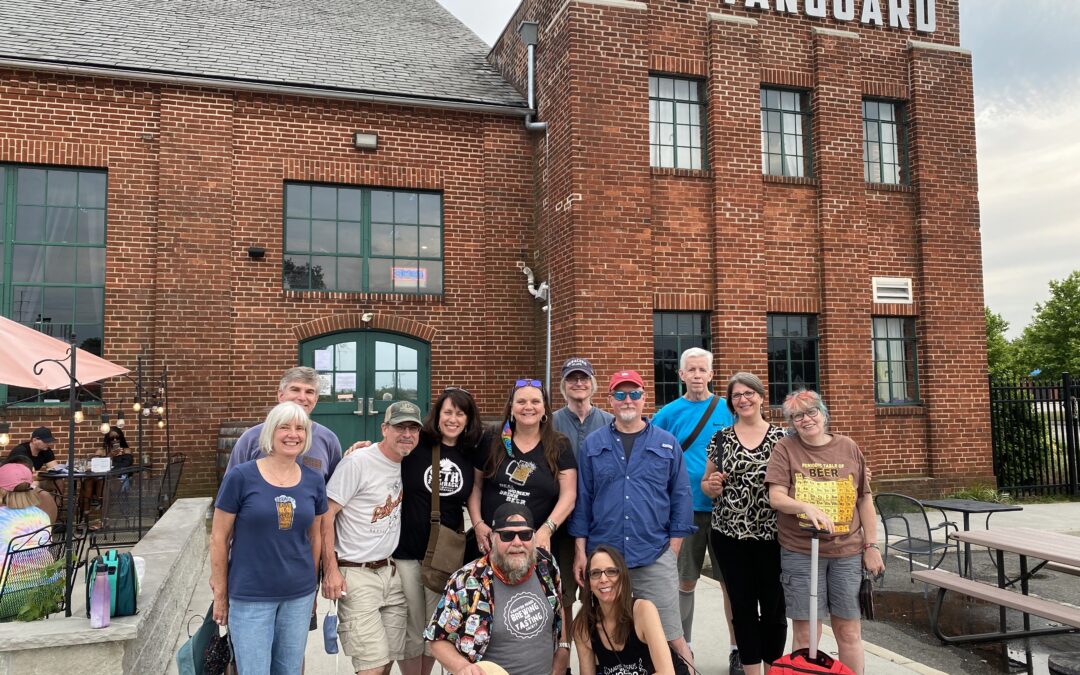 Who is ready to get out of the house and visit a bunch of breweries? We’ve put together a little beer tour you can do yourself or with a group now that things are opening up. While many Virginia regions are making a name for themselves as beer destinations, the “Southern Peninsula” of Hampton and Newport News has reached a critical mass of breweries within a tight enough geographic region to efficiently visit up to seven in a single day! The Hampton Roads Brewing & Tasting Society rented a 16-passenger bus and driver on a recent Saturday and hit seven breweries. You will definitely need a designated sober driver! We’ll tell you a bit about each of the breweries and provide some info about putting together a tour for your group.

If you get an early start, begin the day at 1865 Brewing Company in the “downtown Phoebus” section of Hampton. Pastries, breakfast sandwiches, smoothies, juice drinks, and coffees plain & fancy begin at 7 am. Beer service begins at 11. You can’t drink all day if you don’t start in the morning! The first Black-owned brewery on the Peninsula hopes to defy stereotypes and make everyone feel welcome in this small storefront business, walkable to all the shops and restaurants in friendly Phoebus. They hope to be open by July 1 so call to confirm and check hours, 757-964-9571. Mom & Pop-type storefront building at 9 South Mallory Street, Hampton. Public parking lot in back.

While this is a brewery tour, we would be remiss if we didn’t mention that leaving 1865 and on the way to Oozlefinch, is the Sly Clyde Ciderworks. It’s a pleasant five minute stroll from 1865. Sly Clyde’s opening hours differ by the day, closed Monday. Stop in and enjoy their traditional apple ciders or get creative with blackberry, ginger-lemon, hops, or habanero-rosemary versions in the quaint old renovated family homestead, back patio, or on the porch. Located at 204 East Mellen Street, Hampton.

Next stop, we suggest Oozlefinch Beers & Blending at historic Fort Monroe just a 1.5 mile, five minute drive from 1865. While they are known for their fruited smoothie-sour beers like the Party Dinosaur and Das Yummy, they also have ‘real beer’ for the purists like the Lady in White Hefeweizen and Czech pale lager. In nice weather their outdoor seating gives you a view of the Hampton River and a nice breeze. Explore Fort Monroe by car or bicycle, or pay for a day pass and cool off at the nearby Paradise Beach Club. Oozlefinch opens at noon daily, 81 Patch Road, Hampton.

Bull Island is a must-stop for waterfront views from the patio, a real food menu with table service, and some fine beers like the award-winning King Street Kolsch and the GABF-Bronze Oyster Jalapeno Porter seasonal. The setting can’t be beat, and there is also a separate room for your group as well as a ping-pong table and games. There is free parking in the garage adjacent to Bull Island, and the Virginia Air & Space Center is right next door. They open at noon most days, at 758 Settler’s Landing Road, Hampton, 757-884-8884.

A leisurely walk from Bull Island up S. King Street will take you right by the pedestrian zone at the intersection with East Queen’s Way. You may happen upon a free outdoor concert, live music, or patio dining at one of the several bars and restaurants in this charming historic zone. Keep walking another couple of blocks and you will see the Vanguard Brewpub and Distillery ahead of you, in the lovingly renovated old armory building. Their Caiseal Red Ale medaled at GABF and the spirits are distilled on premises and sold in their own ABC shop upstairs, as well as available ‘neat’ or in a plethora of craft cocktails. This is a full restaurant with a real chef in the kitchen; the food is several notches above bar food but still approachable with burgers (including the Beyond Burger) wings, pulled pork, flatbreads, and stellar fried brussels sprouts. Note this is also a concert venue and there is loud live music on Friday and Saturday nights either indoors or outdoors. They also have a killer Sunday brunch. The Vanguard is at 504 N King Street, Hampton and opens daily at 11:30. Phone is 757-224-1807.

Here you will find the small Capstan Bar Brewing Company, with a small tasting room tucked in the back of an industrial park-type setting. While the tasting room is modest, the beers are rock solid. The Oatmeal Raisin Brown Ale is amazing (but may be gone by the time you get there… please ask them to brew this again STAT!) There is often some type of fun activity ranging from Music Bingo to Texas Hold ‘Em to Trivia Night. They open at 4 pm most weekdays and earlier on weekends. Find Capstan at 2036 Explorer Way, Hampton, 757-788-7276 (back-left side of building).

Just a short drive will get you to St. George Brewing Company. They have been brewing since 1998, longer than anyone else in the region, and have a great family atmosphere. There are picnic-type tables where you can sip suds indoors as well a large hardscape patio with seating both outdoors and in the large tent in favorable weather. On Saturdays at 3 pm there is usually a free tour of the brewery (check the calendar). While many of their beers have won awards, the Porter, English Style IPA, and Honey Mead Lager are notable, and the Larry’s Hard Lemonade is dangerously delicious. They usually have good food trucks on weekends. They open at noon on weekdays, 10 am on Saturday, and are closed Sunday. Get medieval at St George, 204 Challenger Way, Hampton, 757-865-7781.

Tradition Brewing has been making a name for themselves with their wide variety of well-brewed ales and attention to quality. Tradition Lager is one of the finest German-style lagers you’ll find this side of Stuttgart, they also brew Czech, German, and Italian-style Pilsners that are spot on. You will find at least one tart fruited-gose-style beers, unique imperial stouts, and even a crisp Newport-News themed pale ale, We Run This Ship, brewed in collaboration with Christopher Newport University students and faculty. Taster-sizes are available and you can build your own flight. Their tasting room is augmented by a front patio with gas firepit and a rear patio as well. They are at 700 Thimble Shoals Road in Newport News, 757-592-9393, and open at 4 pm weekdays and at noon Fri-Sun.

A fifteen-minute walk through City Center will take you to Twisted Knot Brewing. This is a very small nanobrewery that will remind old-timers of the early days of the craft beer movement. The small industrial building has seating indoors and outdoors in the back, nothing fancy but well intentioned and friendly. The best beer we found was the Peach Cobbler, which was a tasty dark-amber IPA with peaches and a hint of spices like cinnamon. This brewery is quite new and only open Friday and Saturday from 4 – 8 pm. 757-782-5941. Right next door is Brew & Bottle Homebrew Shop.

Another new entry into the local beer scene, Coastal Fermentory opened in winter of 2020 and has rapidly gained popularity in a crowded field due to very tasty beers. Coastal Fermentory is located very close to the shipyard, at the north-end where Huntington and Warwick Avenues connect with I-664. The folks at Coastal Fermentory pride themselves on not having brewed the same beer twice (yet) but you will typically find a hop-forward IPA or pale ale, a pilsner, a farmhouse or saison-inspired brew, a fruited sour, a dark porter or stout, and flights/taster sizes are available. So far they have only kettle sours but the foeders are doing their magic and will yield some mixed fermentation brews in time. They brew a refreshing house jun, which is similar to kombucha, and are right next to the Ironclad Distillery. The brewery has an outdoor patio in the parking lot, at 206 North 23rd Street.

Want to put together your own tour with a driver? Cozzy’s Comedy Club and Tavern in Newport News has a “fun bus” and driver you can book for any occasion. Contact them at 757-595-2800. The 16-passenger bus and driver can be rented for $300 for the first three hours, and then $75 for each additional hour. You pretty much set up your own tour and plan, but the above information will help you do this. Do check opening hours of the breweries!

Here is a plan the Hampton Roads Brewing & Tasting Society did on a recent Saturday. You could adapt this to bring your group on a similar tour that fits your interests, or just plan a tour for yourself.

We met and parked our cars at the free public lot across from the Vanguard Brewery in Hampton. Then we WALKED the short distance to Bull Island to be there when they opened at noon. Some folks just got dropped off at Bull Island at noon, as they carpooled with a designated driver who didn’t participate in the bus tour. Spent about 60 minutes at Bull Island (you may want to spend 90 minutes if people will be ordering lunch). THEN after this time elapsed, the bus picked us up at Bull Island (and the fun bus clock started). The bus took us to six other breweries on the above list. We allowed ourselves just one hour at each brewery so we could get to as many as feasible. We allowed fifteen minutes for the drive between each (often it was less). The last stop of the night was the Vanguard, where we had a dinner reservation. Upon arrival our bus driver was tipped and released from duty. We had the bus for 6.5 hours, and divided among fifteen participants we each paid $40.

You could carpool to and from the event with a DD who can drive you home at the end of the day, or Uber (well worth the cost!) Another idea is that right next to Bull Island, and a short walk from the Vanguard, is a very conveniently located hotel, The Landing at Hampton Marina, Tapestry Collection by Hilton at 700 Settler’s Landing Road, 757-727-9700. This hotel is also a very short walk to all the bars and restaurants on East Queen’s Way, so you can continue the party and have a nice place to lay your head at the end of the day.

Once 1865 is open you could easily start the tour there, leave your car in the free public parking lot behind 1865, have breakfast, then walk to Sly Clyde, and then have the bus pick you at the end of your time at Sly Clyde, to take you to Oozlefinch and several other breweries of your choosing. At the end of the evening, drop off in Phoebus and have dinner at one of the many restaurants there.

Hope this helps you plan a visit to Hampton and Newport News breweries soon!