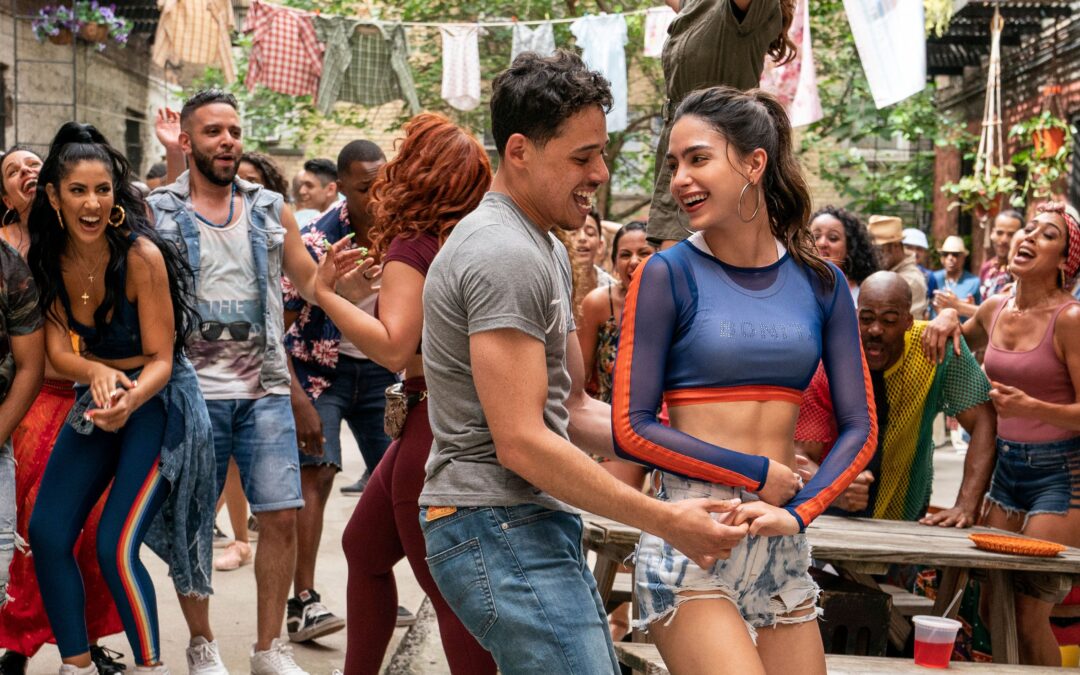 (A scene from the must-see “In The Heights”)

After an unexpectedly long hibernation that began all the way back in March of 2020 with the mandatory closing of the theater, the Naro Cinema has finally reawakened and opened our doors for public showings. During our lengthy closure, the entire Naro staff featuring Thom, Tench, Theresa, and Atlanta have missed the deep connection and trust we’ve created with our tight-knit movie community, and we’re excited to rekindle our long-time friendships.

Along with our eclectic programming of classics and first-run films, the Naro will continue to offer message rentals for our iconic marquee along with theater rentals for private movie parties. And we’ll continue our virtual cinema offerings available to rent on our website. These are the activities that have sustained us during our closure, and we’re indebted to our patrons’ patience and loyalty during a long difficult period for so many of us.

It sure feels good to finally make it to the other side of the shutdown. But let’s keep in mind that we have only arrived at this moment due to the speedy implementation of vaccines. We encourage everyone to stay safe, and first get a vaccine before joining us for a showing at the Naro. In keeping with our community safety practices, our Naro management will continue to follow the guidelines set by the Centers for Disease Control and Prevention (CDC), the voluntary CinemaSafe guidelines developed by the National Association of Theatre Owners (NATO), and all state guidelines.

To help provide a safer environment throughout the building, the cinema staff has made significant improvements during its temporary closure – including a thorough lobby renovation and deep cleaning of the entire theater, along with up-to-date maintenance of our HVAC system including frequent replacement of multiple air return filters. Our projection equipment has been tweaked to provide state-of-the-art visual and audio presentation.

But in our rush to return to normal after the pandemic, let’s not forget all those less fortunate to do so. And the multitudes of humanity who live in the global south and who have little access to modern medicine and vaccinations and must still endure the worst effects of the pandemic.

The world is learning a difficult truth – all of life is deeply connected. Our process of awakening can be nurtured by great art and inspirational movies both old and new. We’re finally able to once again congregate and experience movies together – a public event in a darkened theater with an audience that’s fully focused on the widescreen. That’s the definition of cinema, and it has the power to transport us  into a collective dream. For over 44 years, the Naro has strived to program the best of cinema for our audience.

This is the electrifying big screen experience that we’ve all been anticipating ever since the pandemic began. The creator of Hamilton and the director of Crazy Rich Asians have joined forces and invite you to experience the energetic Latinx community of Washington Heights through their love of music – hip-hop, salsa, and merengue. Lin-Manuel Miranda has created a musical so magical and full of life that you’d be convinced that the movies are back, even if they hadn’t gone anywhere for the last year. The entire cast is perfection – from Anthony Ramos as the young charismatic bodega owner who wants to move back to the Dominican Republic and Melissa Barrera as his compelling dream girl who only wants to move downtown and join the fashion industry. Filmmaker Jon M. Chu’s kinetic and authentic eye for storytelling captures a world very much of its place, but universal in its experience. Opens Friday, June 11th.

While her house undergoes repairs, a fiercely independent senior must move into a nearby retirement community ― just temporarily. Once inside the Pine Grove Senior Community, she encounters a cast of characters played by Ellen Burstyn, Ann-Margret, Jane Curtin, Loretta Devine, with James Caan, Christopher Lloyd, and Elizabeth Mitchell. Opens Friday, June 25th.

A major snowstorm traps the residents  of Beaverfield all together inside the local inn. Newly arrived forest ranger Finn (Sam Richardson) and postal worker Cecily (Milana Vayntrub) must keep the peace and uncover the truth behind a mysterious creature that has begun terrorizing the community. Playdate to be announced.

When a killer shark unleashes chaos on a Cape Cod beach community, it’s up to a local sheriff, a marine biologist, and an old seafarer to hunt the beast down. The blockbuster film that changed Hollywood was directed by Steven Spielberg and stars Roy Scheider, Robert Shaw, and Richard Dreyfuss. Opens Friday, July 2nd.

SUMMER OF SOUL (… Or, When the Revolution could Not be Televised)

In his first feature documentary as director, Questlove assembles joyous archival footage from the 1969 Harlem Cultural Festival, a series of concerts that developed a reputation as the Black Woodstock. The film features electrifying performances from Nina Simone, Sly & the Family Stone, Ray Barretto and more. Opens Friday, July 2nd.

This annual Festival returns this year stronger than ever, after going dark last summer for the first time in 17 years. It’s hosted and programmed by long-time film and theater critic, Mal Vincent. All films show on consecutive Monday evenings at 7:00pm when Mal starts his introduction. Each film has an encore showing on the following Tuesday matinee without Mal’s intro. The titles are listed below.

SINGING IN THE RAIN

This all-time favorite 1952 American musical was directed and choreographed by Gene Kelly and Stanley Donen, and stars Kelly, Donald O’Connor, and Debbie Reynolds in a comic depiction of Hollywood entering the era of ‘the talkies’ in the late 1920s. Shows Monday, July 12 (and Tuesday matinee, July 13).

This 1957 American drama stars Lana Turner and a cast of stars as the residents of a small fictional New England town in the years surrounding World War II, where scandal, homicide, and moral hypocrisy belie its tranquil façade. Shows July 19 & 20.

The young Queen Elizabeth I is played by Jean Simmons in this beautiful 16th century period drama. Shows July 26 & 27.

SHOP AROUND THE CORNER

Gene Kelly and Frank Sinatra star in this 1949 musical with a score by Leonard Bernstein. Shows Aug 23 & 24.