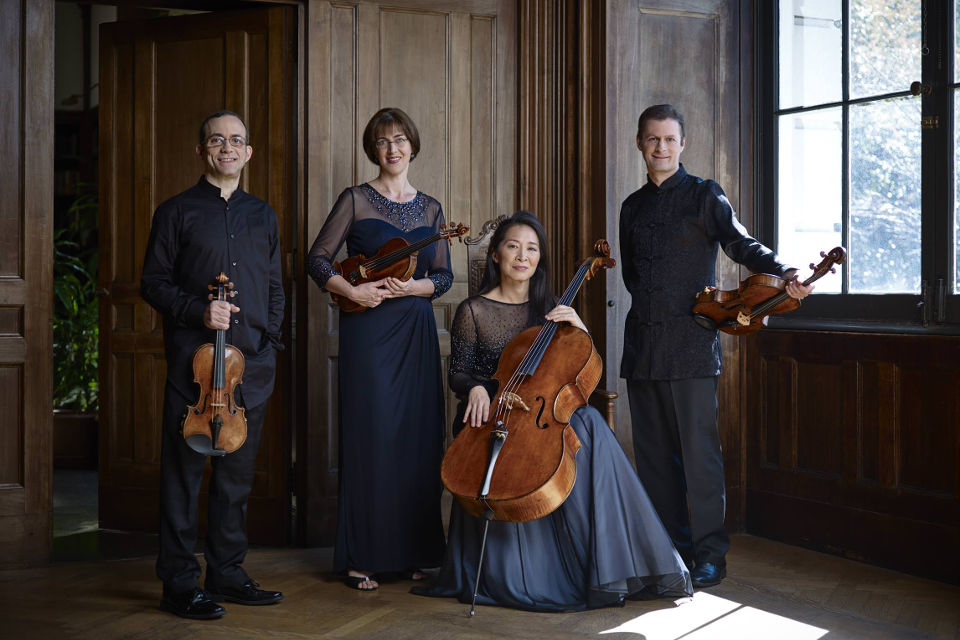 The elegance of chamber music brings a socially distanced relief from the arts starvation of the COVID ravaged world when the Brentano Quartet performs at the Virginia Arts Festival’s new Bank Street Stage and at the Sandler Center.

Since its birth at Juilliard, the Quartet has won a wall-full of awards, contributed to the film soundtrack for A Late Quartet, recorded a double handful of CDs, racked up volumes of critical praise, been resident artists at Princeton and Yale, and concertized at just about every venue that welcomes the best classical musicians.

Founding member Serena Canin chatted on the phone, effervescently, about the two programs.

The Bank Street Stage evening performance begins with Joseph Haydn’s String Quartet in D major, Op. 71 No. 2. Violinist Canin calls it “A piece of pure sunshine,” adding that “it’s one of the first pieces that our quartet did…so we decided to revisit it as part of our 30th Anniversary. We started in November of 1992 so we are calling this our 30th Anniversary Season.”

Dmitri Shostakovich’s String Quartet No. 11 in F Minor, Op. 122, of 1966, provides a striking contrast to the lively Haydn. “ A complete contrast,” Canin agreed, characterizing the piece as “rather grim and stark. It goes from dark, grim, to intense to tragic to elegaic.” she said, explaining that it was dedicated to the memory of the late second violinist of Soviet Russia’s Beethoven Quartet, which had premiered almost all of Shostakovich’s previous string quartets.

Beethoven finished his last complete work, his String Quartet in F, Opus 135, just a few weeks before his March 1827 death.

Canin describes it as being “unlike his other late quartets, which are known for being quite massive works.” She calls it “far reaching, concise, full of humor and lightness, as if he were kind of distilling his ideas, and just ending with pithiness and a succinct kind of expression.”

The Sandler Center program starts with a Bach Prelude in F minor, “a piece that was written for the keyboard and we have stolen it, brazenly swiped it from the pianist.”

Canin is married to a pianist.

(That’s Thomas Sauer, who suggested that the once nameless quartet find its namesake in Antonie Brentano, the married daughter of a wealthy diplomat, to whom Beethoven dedicated his Diabelli Variations and who is often thought to be the composer’s unnamed “Immortal Beloved.”)

Canin calls this Bach Prelude “a very short sort of introduction to the key of F minor… a really unusual key for a string quartet, a dark and turbulent key.”

Haydn’s here again with his Opus 20, #5 in F minor. Music writer and reviewer David Hurwitz has called Opus 20 and its six string quartets “The first great instrumental works in the classical style,” and claims that Opus 20  “Looks a hundred years into the future” from its 1772 date of composition.

Canin says, “Musicians like to call him Papa Haydn. He was the first (she paused) Haydn really took off with this combination…the most inventive, prolific, conversational, wonderful composer! …He really made the [string quartet] form come into its own. With Haydn you see more interaction between the parts – a lot more humor and banter between all of the voices. Many of them are marked sotto voce. We play very quietly like in a whisper, I think to evoke the distant past, like through a distant mirror. [Then] at the very end a forte and fortissimo and into the present day.”

The Stravinsky Concertino, which is merely 101 years old, and which follows the Haydn, is “an interesting work. It’s about six minutes long…Where the F minor is very brooding, this is very playful, rhythmical, jovial, brilliantly orchestrated, very catchy and alive and alert kind of music, very appealing.”

That’s quite unlike the Mendelssohn Opus 80 in F minor that closes the concert. “Written just after his sister passed away, this is his grieving process…very stormy. Mendelssohn usually has this sense of decorum…he kind of lets that go. [It has] a trembling shaking kind of sound…it’s very exciting.”