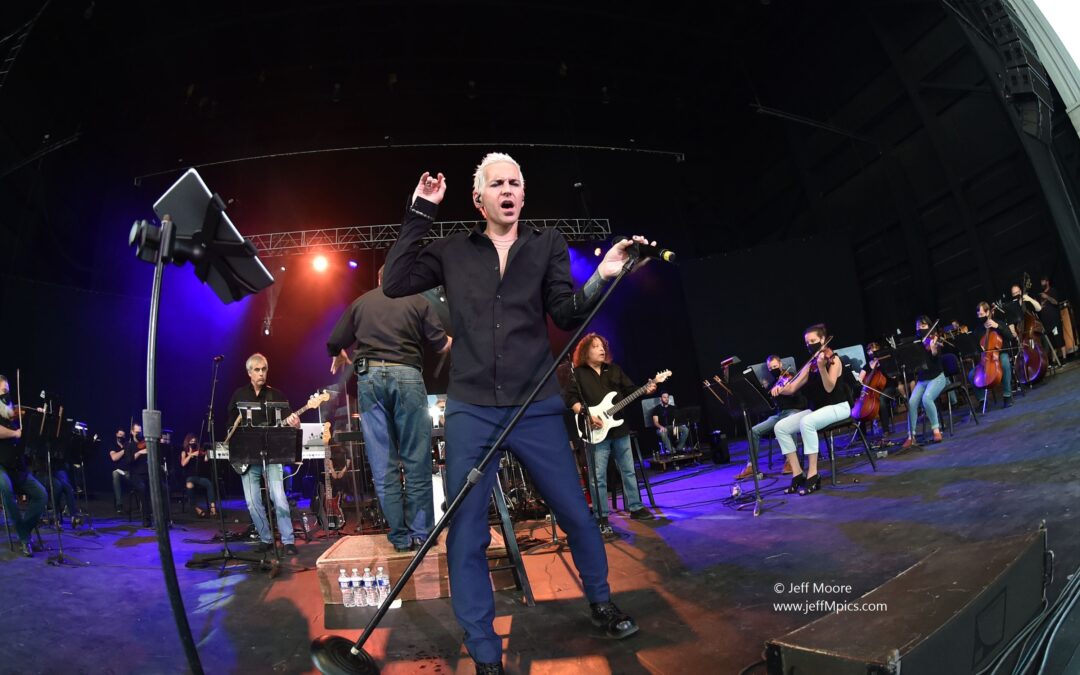 Ground Control to Hampton Roads: Concerts are back.

Saturday night’s “Music of David Bowie” was more than just a homage to one of pop culture’s most enduring icons of the 1970s and ‘80s, it was a celebration by concertgoers finally allowed to attend a full scale concert production while also marking the first show in nearly three years at the tented Atlantic Union Bank Pavilion — the Portsmouth amphitheater.

New York City-based singer Tony Vincent, who made a name for himself in touring Broadway productions such as “Rent” and “We Will Rock You” (he also performed “Bohemian Rhapsody” with Queen in 2002 at the Party at the Palace in London), was a commanding, animated frontman with the pipes and tonality to deliver a convincing voice in performance of some of Bowie’s most well known hit songs.

Vincent was backed by the Virginia Symphony Orchestra and the well-oiled rock band known as Windborne Music, a group conducted by Brent Havens and featuring George Cintron (guitar), Dan Clemens (bass), Powell Randolph (drums), and Justin Avery (keyboards). The show was presented by the Virginia Arts Festival, an organization which is leading the entire nation in producing live performing arts as we enter a post-pandemic phase.

Many of the song arrangements on this warm evening seemed to take a cue from David Bowie’s “Realty Tour” live DVD.

The concert opened with guitarist George Cintron doing a little noodling before kicking in with the familiar riff of “Rebel Rebel.” It made for an energetic start and was a crowd pleaser.

Between each song Tony Vincent shared his impressions of David Bowie and of each tune the ensemble was to perform next. He did so without naming it, giving the audience a five-second chance to guess what was coming next.

Before “Changes,” Tony Vincent noted that Bowie transformed his image and music from album to album over his long career. Leading into “Let’s Dance,” Vincent and audience members shared astonishment that Bowie had only two #1 hit songs in his career. Mentioning he once saw a blue vinyl album at a friend’s house, the group launched into “Blue Jean.”

Musical highlights came in the form of the epic “Space Oddity,” a performance where the Symphony’s string section really impressed, and “Starman,” which concluded with Vincent engaging with the audience to sing along and wave their arms during an extended chorus at the end of the song.

If I were to nitpick about anything it would be the non-inclusion of a saxophone. The sax played a prominent role in Bowie’s music and there was none to be heard in this performance. On “Young Americans,” for instance, a trumpet substituted for the tune’s signature saxophone solo. While it proved an interesting diversion from the original, some things don’t benefit from alteration.

My only other critique is the melodic guitar part on “Heroes” should have been boosted in the sound mix. Both on Bowie’s studio version and in every live performance that guitar part is out-front as it should always be.

The concert ran 90 minutes and while it is impossible to perform every diehard Bowie fan’s favorite song — not to mention deep cuts — I couldn’t help but wonder what the symphonic aspect might elevate when it came to the likes of “Ashes to Ashes” and “Life on Mars.”

Even with greatly reduced capacity limits and social distancing as still mandated by order of Governor Northam (that all goes away next weekend) the performance still felt like a major concert production — lights and all.  And what a delightful evening for Tony Vincent to deliver such an impressive vocal performance of David Bowie. The stars, indeed, “looked very different today” and thus begins a hopeful return to normalcy. It’s time once again to take your protein pills and put your concert helmet on.