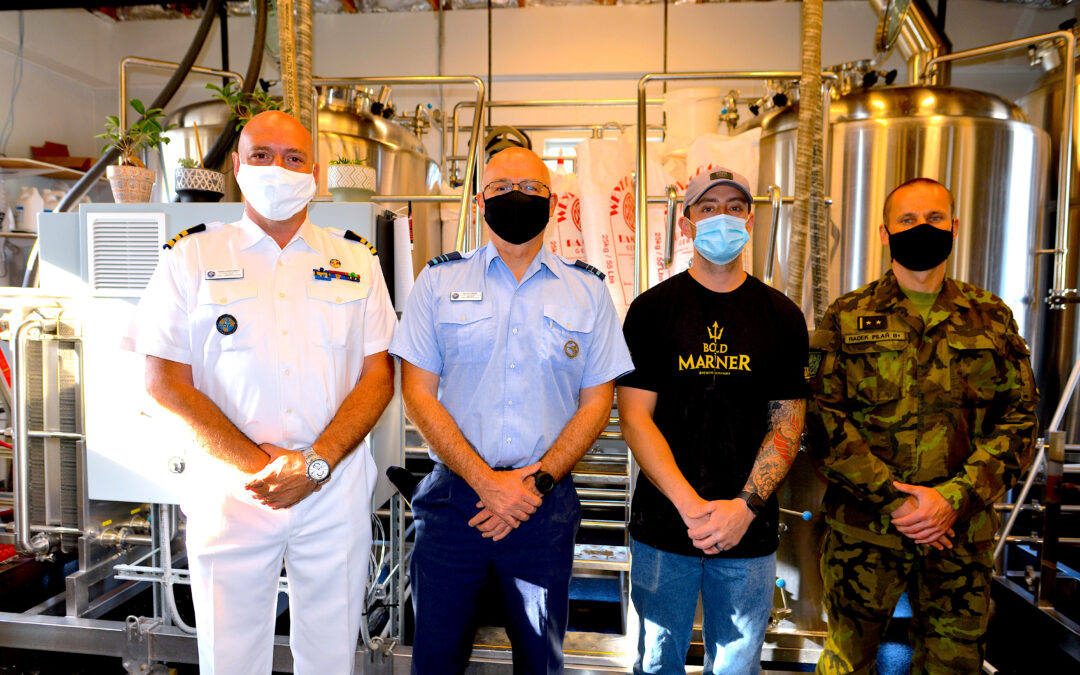 (Brew Day at The Bold Mariner Brewing Company in Norfolk)

In what has now become a Norfolk NATO Festival tradition — born five years ago — a collaboration beer pairing The Bold Mariner Brewing Company and NATO Headquarters will be featured at the Festival’s International Village for all to enjoy — on Saturday, June 5 at Scope Plaza following the 10 AM flag raising ceremony.

For this year’s collaboration, the Festival sought to celebrate two great European beer cultures by inviting representatives from Belgium and the Czech Republic to directly participate both in the brewing of the beverage and naming the finished product.

The joint forces brewing effort is called Poppy Ruza Pilsner.  The poppy and the rose (Ruza is Rose in Czech) are the national flowers of Belgium and the Czech Republic.

The NATO personnel toured the brewery, discussed the brewing process, and each climbed the ladder to pour bags of malt into the brewing kettle.

The agreed upon beer style was a pilsner, an easy drinking beverage widely enjoyed in all the world.

Pilsners as a beer style are classified as a pale lager. The name is taken from the city of Pilsen in the Czech Republic (Bohemia) where Bavarian brewer Josef Groll brewed the first batch in 1842 for Pilsner Urquell (originally called Burghers’ Brewery).

Pilsner style beers are, in fact, widely produced in Europe. While Belgium is known for its many high alcohol Trappest beers like Chimay, Rochefort, and Westmalle, its most successful brewed beverage is Stella Artois, a Belgian pilsner.

While pilsners may seem like an ordinary beer to produce, they require five full weeks of fermentation and are susceptible to variations in temperature and light exposure. And for all the hoopla over IPAs, most American brewers prefer a solid pilsner.

“In my opinion a great pilsner is crisp, dry, with a lot of hop flavor and aroma but not too bitter,” said O’Reilly.

So, what’s in Poppy Ruza Pilsner?

The Norfolk NATO Festival recognizes and celebrates the long-standing friendship between NATO and the City of Norfolk. It is the longest continuously running festival in the Hampton Roads region, and the only one of its kind in the United States, which, honors the NATO Alliance and its member Nations.

The Festival views its role as a community educator sharing the cultural relevance of the NATO nations and personnel stationed in Norfolk. Each member nation is eager to share its culture with Americans, and for nearly 70 years the Festival has been an essential partner.  And, as it turns out, the Festival Beer solidifies everything.

“Belgium is the beer capital,” said Lt. Col. Ronald Hoppe of the Belgium Air Force. “It’s very deep in our culture and heritage. We brew from 800 to 3,000 different beers.

“For us the Norfolk NATO Festival is very important because it forms a bond between NATO and Norfolk and the USA,” concluded Hoppe.

“Beer is certainly very important for the Czechs,” said Lt. Col. Radek Pilar of the Czech Republic Air Force. “I had a chance to participate in Norfolk NATO Festival before, and it was an outstanding event. One of the most important things in one’s life is to travel around the world as much as possible so that one can experience other cultures and one can understand why people do things, and to better understand the world. That’s what the Norfolk NATO Festival is about.”

As all parties began to depart from the brewery NATO Public Affairs Officer Lt. Cmdr. Rochelle Rieger of the US Navy summed it up perfectly: “This is one thing that really unites us all — the beer.”