MUSIC: The Ballad of Duane & Nakia 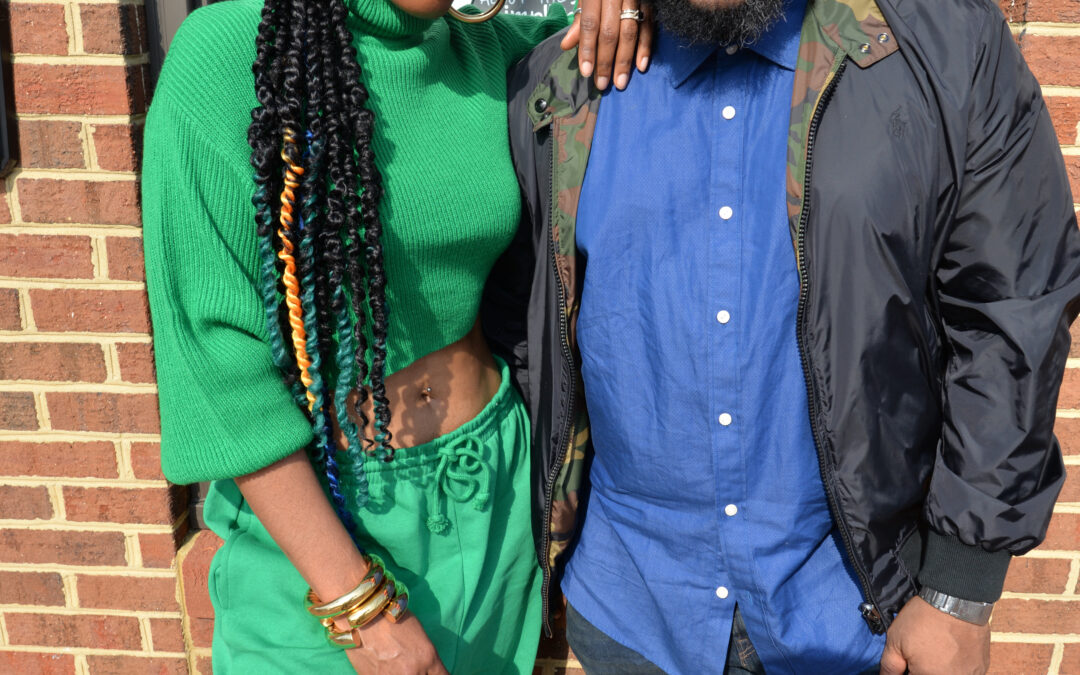 There are probably 100 different ways I could tell the story of Duane Smith and Nakia Madry-Smith. The dynamic duo have shared a young life of love and adventure through music and education. Sitting with the Uber-talented husband and wife on the sidewalk cafe outside of Mango Mangeaux, I learned something new about the couple’s globetrotting — Nakia was once  kidnapped — so let’s start with that.

Duane and Nakia are part of the multiple award-winning 8 to 10-member R&B group The Fuzz Band. During one of their Fuzzy Wednesday’s open mic sessions an unnamed member of the US military liked what he/she heard and hooked them up in 2005 on a USO Tour circuit to entertain the troops in faraway places to boost morale.

“We wanted to go to Hawaii and the Pacific,” recalled Duane, “but the tour they gave us was Southwest Asia. We thought, ‘Wow, that sounds fun.’”

The band was taken aback at first when told their destinations were Kuwait, Iraq, Qatar, United Arab Emirates, and the Republic of Djibouti. The initial USO tour would be followed by a one-stop show in London and a Mediterranean journey to Italy, Turkey, Jordan and Egypt. Upon arrival in Cairo, Egypt things didn’t go as planned at the airport.

“They lost my luggage,” said Nakia. A couple days passed and then she was notified to return to the airport to claim her bag. “Myself, Duane, Jason, Brian and Paul, we all got into a van and we headed to the airport. I remember the first bad sign was that there were protests everywhere.”

It was nighttime and when the band members reentered the airport they encountered a large force of guards armed with automatic weapons.

“When we approached them about my lost luggage they asked me for my passport,” Nakia said.

“That’s what we were told never to give up,” Duane inserted.

“The man had an uzi so I gave it to him,” Nakia replied.

The armed guard placed Nakia’s passport in his pocket and instructed her to follow him into the back. The other members of the band forbidden to accompany her.

“They had machine guns and ammo strapped over their shoulders,” Nakia said. “I followed this gentleman way back to a building behind the airport. They put me in a room and said, ‘You give us money. Pay me.’ I didn’t have any money on me so they slammed the door and locked me in this room.”

Roughly an hour latter the guards returned to the room where Nakia was being detailed and again demanded money.

“By this time I’m panicking and crying,” she said. “They closed the door again and I can hear them saying things. About an hour later — again — they grabbed my arm; they take me to the warehouse where they hold luggage; they opened my luggage to tossed everything out and kicked it, and flung my passport at me. I made my way back to the front of the airport.”

To say the least, Duane — who had only recently at that point began a romantic relationship with Nakia — was becoming emotional.

“I was losing it,” said Duane. “I was responsible for her. I started thinking about her father, her mom.”

Overall, Nakia and Duane say their USO Tour experiences have been rewarding and memorable. They valued being able to bond with the troops. Duane also has fond memories of Camp Striker, a logistical base within the Victory Base Complex in Bagdad, Iraq.

“It was like an action hero movie,” said Duane. “They came and got us on a Chinook helicopter. It broke down in the middle of nowhere at night.”

“We couldn’t turn on any lights,” included Nakia, “because that’d give away our location and we’d be sitting targets.”

After returning to the base, the helicopter pilot was immediately called to respond to a new mission. The Fuzz Band was hastily disembarked — musical instruments and all. During the hasty, chaotic drop-off, band member K’Bana Blaq, who was somewhat drowsy and jet-lagged, became disoriented.

“He starts running with the Striker Team,” Duane said. “He doesn’t know what’s going on, and our two armed guards went after him. So K’Bana was getting on a van to go into combat.

As this happens, the Colonel comes out and says, ‘Welcome to Camp Striker.’”

All in a day’s work for The Fuzz Band

For Duane and Nakia it all began at Hampton University where they met as students of music.

“Someone told me about him, but he had a girlfriend and I was new at school,” recalled Nakia.

Duane Smith was raised in Brooklyn, New York. His mentor, Weldon Irvine, who was Nina Simone’s bandleader and also composed over 500 songs such as “To Be Young, Gifted and Black, was born in Hampton, Virginia before settling in New York City. Duane studied jazz with Weldon Irvine as a teenager in Queens.

“He knew I wanted to get out of New York,” said Duane.

Nakia Madry (at the time) hailed from Connecticut, and like Duane wanted to study music.

“I was looking for the Black College experience,” said Nakia. “I knew I wanted to study music engineering and Hampton was one of two schools that offered this program.”

She also had family members that talked-up the Hampton University experience of excellence.

Duane started booking bands as a promoter at age 13. He won a talent contest in New York called the African Street Festival and headed down to the Apollo Theatre.

“In doing that I made a little local name for myself,” he said. “Booking bands and playing in bands became my thing.”

When Duane Smith arrived at Hampton University he put together a house band for his new open mic concept — Fuzzy Wednesdays.

The Fuzz Band has hosted Fuzzy Wednesdays for over a decade in various locations. The event was is mix of open mic night freestyle expression and a talent show.

“We just got the best musicians, best singers would come and everybody would just put on their best,” said Duane. “Jill Scott when she was starting out came; John Stephens, who became John Legend, came. Sy Smith, who is now all over the place and just sang with St. Vincent on Saturday Night Live, came. And so many people doing their own thing now in the 757, I can claim them as Fuzzy Wednesday children, like Bill Mercury and Romonta. Jon Bibbs who is now up in Richmond. Even Butcher Brown, and they just signed to a major label. It’s a really special open mic; it’s like a church where people need something special in the middle of the week to get over the hump.”

In addition to The Fuzz Band, Duane and Nakia have a few joint side-projects. Rocky 7 allows Nakia to explore her pop music side with a covers-heavy setlist. D*Nik focuses on originals. 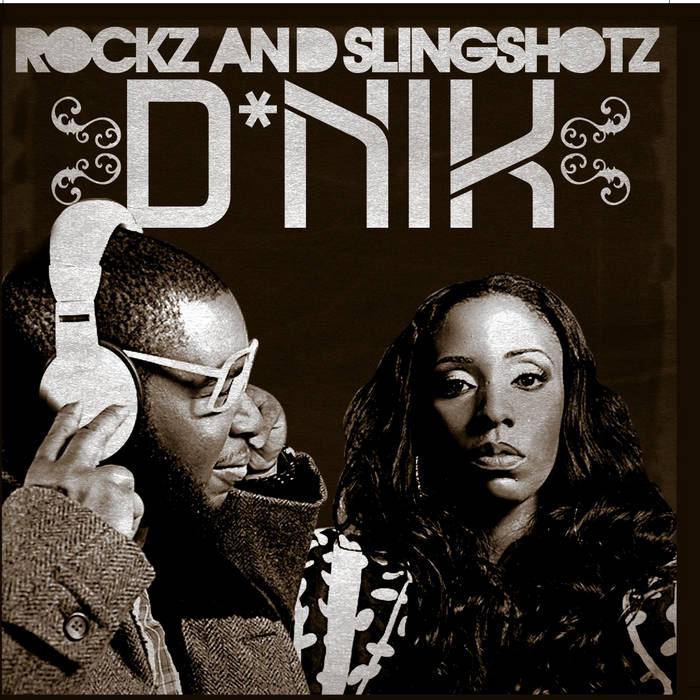 (Released in 2014, this studio recording side project of Duane and Nakia demonstrated their electronic music side.)

In 2014, Nakia and Duane showed off their electronic pop music side with the critically acclaimed 18-song album “Rockz and Slingshotz” under the name D*Nik. “Day and Night,” “Slingshotz” and “Celebrity Crush” are highlight tracks from the album, which can be heard in its entirety on Bandcamp. D*Nik also released a melodic, infectious single, “Stuck on Dumb,” in September 2020. Duane put together a well-edited music video of friends and family lip-synching the words from home as a surprise post on social media for Nakia’s birthday.

Nakia also is a member of Voices of Fire. The gospel group is led by Bishop Ezekiel Williams with the guidance of his famous nephew, Pharrell. A six-episode documentary series about the group aired on Netflix last year. Nakia, and the group, which includes fellow Fuzz Band vocalist Michon David, performed on The Late Show with Stephen Colbert in December.

If all this, couple with professional day jobs, Duane pursues his deep jazz roots by performing live as Duane Squire Smith Quartet at The Loft at Brothers, and then goes all-out ‘70s with We Funk Wednesdays, also at Brothers in downtown Norfolk.

While the band has taken a break from its open mic production good news is on the horizon: Fuzzy Wednesdays will return on Wednesday in June 2 at Club Noir in Phoebus.

“We want to bring it back with a bang because it’s been gone for so long and I think people really need it,” said Duane.