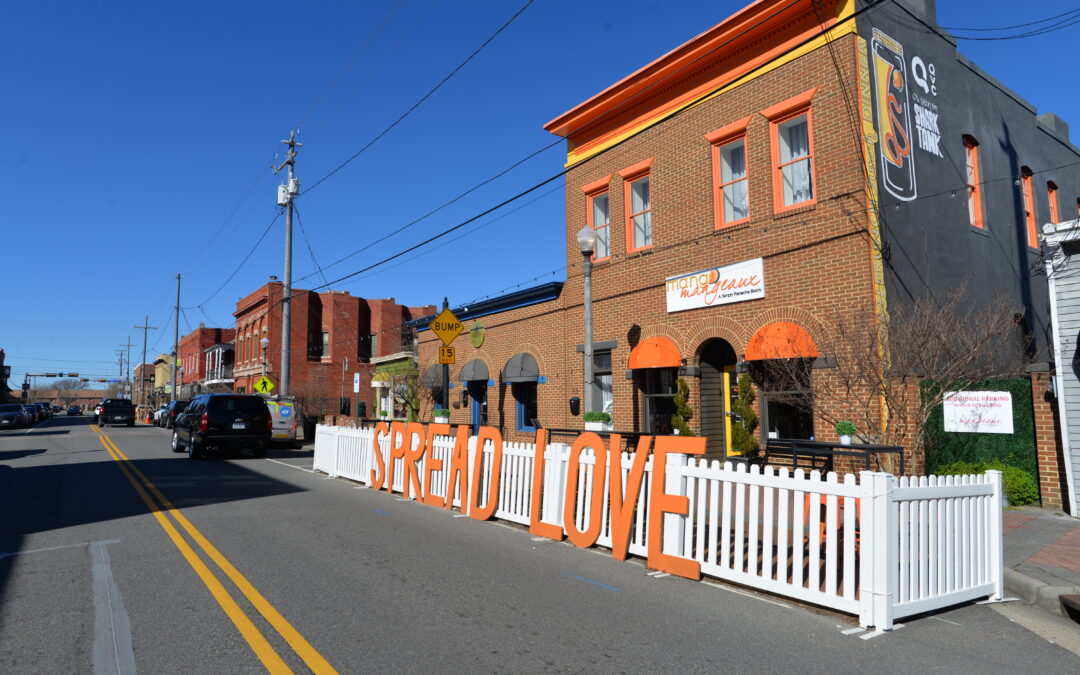 (Mango Mangeaux is nationally famous and a hotspot on Mellen Street.)

The historic town of Phoebus is in the midst of another resurgence and revitalization. There is a palpable sense of excitement and progress in the air, and it’s infectious!

Some say it has been a long time coming — now it seems that all the pieces are falling into place.

As Chuck Rigney, Hampton’s Director of Economic Development, exclaims with unfettered enthusiasm:  “Phoebus is firing on all rockets!” And Hampton Commissioner of the Revenue, Ross Mugler, agrees. “Phoebus is rocking and rolling,” he states with pride as he has many roots in the community.

There’s an old joke that used to do the rounds — that is that Phoebus is like a big cat — not with nine lives but with 109 lives. Looking at Phoebus’ storied and historic past, it is not hard to agree with the tale.

Now  big things are afoot again as this charming neighborhood reinvents itself, mainly because of the wise and forward thinking decisions being made by several groups of developers and investors who have enthusiastically been instilling new life into old businesses and buildings – many of which had been shuttered and neglected for years.

When it reopened in 2000, the 400-seat American became a favorite among theatre goers and music lovers from the entire region. Similarly other live music venues sprung up – The Big Pink aka Victorian Station, Phoebus Dive Bar and Stuft. Phoebus has always relished its community sponsored fairs and spring and fall festivals. The annual St. Patrick’s Day party at Sarah’s Irish Pub was a favorite.

IN IT FOR THE LONG TERM

Just like long term Phoebus businesses such as Electric Glass (which sadly went away after almost three decades) and Phoebus Auction Gallery, the American Theatre attracts an impressive crowd from all parts of the region and often as far afield as Richmond. Not long after the theatre reopened, there was a spate of new restaurants such as Six (now El Diablo) and Siren (now Mango Mangeaux). Long time businesses have continued to thrive – such cornerstones of the community as Palace Jewelers, Mellen Street Creative, The Mallory Ritz, The Grey Hare and Benders Comics still attract a loyal and dedicated number of clients. Another great Phoebus fixture is  the much loved Mama Rosa’s Italian Family Restaurant which began back in the ’70s as a hamburger joint.

Over the past decade or so, the community has continued to evolve and transform itself into a truly unique and charming destination. The group known as Tidewater Restaurant Group came in and rehabbed The Deadrise restaurant on Fort Monroe, El Diablo, and Fuller’s Seafood Restaurant  (which was Sarah’s for many years) — all of which are doing remarkably well even in these strange times of Covid.  We have also seen the addition of Stuft restaurant which serves great Mexican street food as well as live music, the popular Skrimp Shack and the New China Restaurant — so you can find virtually any kind of cuisine you fancy.

It was not too long ago that Phoebus was known far and wide as Little Chicago or Sinful City. It was, after all, the stopping off point for soldiers from Fort Monroe as well as sailors from Norfolk. In the year 1900 there were no fewer than 52 saloons in Phoebus. Think about it for a moment and reflect that in the same year, Hampton had just over 20.

Phoebus has always enjoyed its reputation as a destination and has maintained its fiercely independent and feisty charm.

From its simple beginnings as a fishing community, Phoebus has been a support or service community — serving as the gateway to Fort Monroe and Buckroe on the eastern side and the VA Hospital, Hampton University, Hampton and Newport News on the western. And of course, Southside Hampton Roads.

Earning its place on the National Historic Register in 2006, the town has always had all the elements that make for a vibrant and long lasting community — all the necessities within walking distance. It still has and many of these businesses are family-owned. You will find all you need — a bank (Old Point) established in 1925 and still locally-owned with branches all across the region; a post office complete with a splendid mural,  a couple of gas stations, an increasing number of intriguingly diverse restaurants, a friendly and highly rated grocery store and pharmacy, excellent dry cleaners, auto repair shops, antique stores, one of a kind boutiques, antique stores and an incredibly well-stocked antique book store,  live music venues and a first class theatre, an award winning school (interdenominational and run by the Dominican sisters) that will soon celebrate its 100th anniversary.

Incorporated as Chesapeake City in 1874, Phoebus owes its fame to an enterprising and hugely successful figure who moved here from Baltimore after the Civil War. He persuaded some backers to help him take over and manage the Hygeia Hotel on the Fort in 1868. The Hygeia became one of the finest resort hotels accommodating as many as 1,000 guess. There were daily arrivals of steamships coming from D.C and Baltimore and ferries to and from Norfolk before the Naval Station was built in 1917.

It was Harrison Phoebus who persuaded his friend Collis Huntington of local shipyard fame to join him in getting the Chesapeake and Ohio railroad to extend its tracks from Newport News to Old Point Comfort where the Chamberlin still stands. The rail service began in 1882 and lasted until 1954.  At about the same time, the trolleys started running the route from Newport News to Fort Monroe and to Buckroe. These two methods of transportation literally transformed the small town into a bustling center of activity, and Phoebus took off.  Then in 1900, the council voted unanimously to rename the community after Phoebus to honor the pioneering and trailblazing work he did to put the whole area on the map. It was not until 1952 that the Town of Phoebus was merged into Hampton.

Of course, there have been some serious setbacks and blows to the community — most obvious being the closure of Fort Monroe in 2011. During its heyday as an active Army base, there were more than 10,000 soldiers and civilian workers on the Fort and the loss of that many people obviously had an impact on the adjoining town. Phoebus also suffered a couple of other hiccups when the railroad was closed down and when the Hampton Roads Bridge Tunnel opened in 1957. This marvel of engineering changed the face of the Virginia Peninsula while basically cutting the community of Phoebus in half. Prior to that during the years of prohibition in the early 20th century, many of the town’s saloons and bars went out of business.

Fast forward to the present and we see a gleaming new luxury apartment complex with 162 units (1 and 2 bedroom) all of which are expected to be completed by mid-April this year. Monroe Gates Apartments will surely add new life and vibrancy. Daniel Aston, the principal at The Whitmore Company which has developed the property says with joy and a huge smile: “The response from the community has been astounding, exceeding all of our expectations.” Aston’s company has enjoyed huge successes with similar rehab projects in Williamsburg, Portsmouth and several big cities including Dallas and others.

There is an old saying in theatre circles that the objective of any theatre is to “get bums in seats.” Dan Aston takes that analogy a little further, stating that his company’s objective is to “get feet on the streets.” The entire concept of the apartment complex is based on pedestrian traffic.  As Dan notes, “We have everything a potential renter would require — a bank next door, a great grocery store just down the road and all of these eclectic restaurants all within walking distance.”

Solidly built, Monroe Gates  features a state of the art fitness center, resort style pool and stunning club house full of historical photographs and art. The complex even has its own dog park.

And there is easy access to many recreational activities in and around Phoebus. The fairly recently established city park at the foot of Mellen Street offers wonderful opportunities for fishing, kayaking, sailing and wind surfing, while Fort Monroe offers so much in terms of walking tours, hiking, swimming in the Bay or just discovering the incredibly rich history of the Fort which has been in existence for more than 400 years. Fort Monroe was designated a National Historic Monument by President Barack Obama in 2011 and is jointly run by the National Parks Service and the Fort Monroe Authority.

Another Phoebus enthusiast who has been very instrumental in bringing Phoebus back to life is Randy Thomas, president of Spacemakers. His company has been responsible for the build-outs of many of the newly rehabbed buildings. One of which, The Baker’s Wife,  is touted as “one of the best build-outs I have seen in Hampton Roads” by development director,  Chuck Rigney.  Randy knows a lot about rehabilitation of historic buildings as he now owns the former Armory building in downtown Hampton — The Vanguard. Randy loves the new vibes in Phoebus and affectionately says it’s getting to be a lot like New Orleans with its funky architecture, outdoor dining and all the amazing amenities the community offers. “It is so exciting to see things coming back to life and pumping energy into the economy,” he said.

Another great driving force of this renaissance is Norfolk- based developer and investor Richard Levin. Seeing the potential of the community, he began purchasing and rehabbing properties in Phoebus a few years ago and now owns a total of nine — all of which have become successful businesses and destinations. The three ladies of Mango Mangeaux restaurant have also been going gangbusters. Their entrepreneurial portfolio now includes Simply Panache Nail Bar, Simply Panache Boutique Hotel, the Hampton — a venue for meetings, reception and events and most recently, Charlotte’s Cafeteria. Tim and Doug Smith have been enjoying much success after they renovated their old family property and turned it into Sly Clyde Ciderworks.

As Fort Monroe continues to rehabilitate and adaptively reuse many of its historic properties, there will be more and more people coming to live and rely on Phoebus as the support center it always was. At the same time, there is much development and new construction going on just down the road in Buckroe so the future does indeed look bright for this historic and intriguing part of Southeastern Virginia.

Come on down… and enjoy. Oh.. and there is plenty of off-street parking.