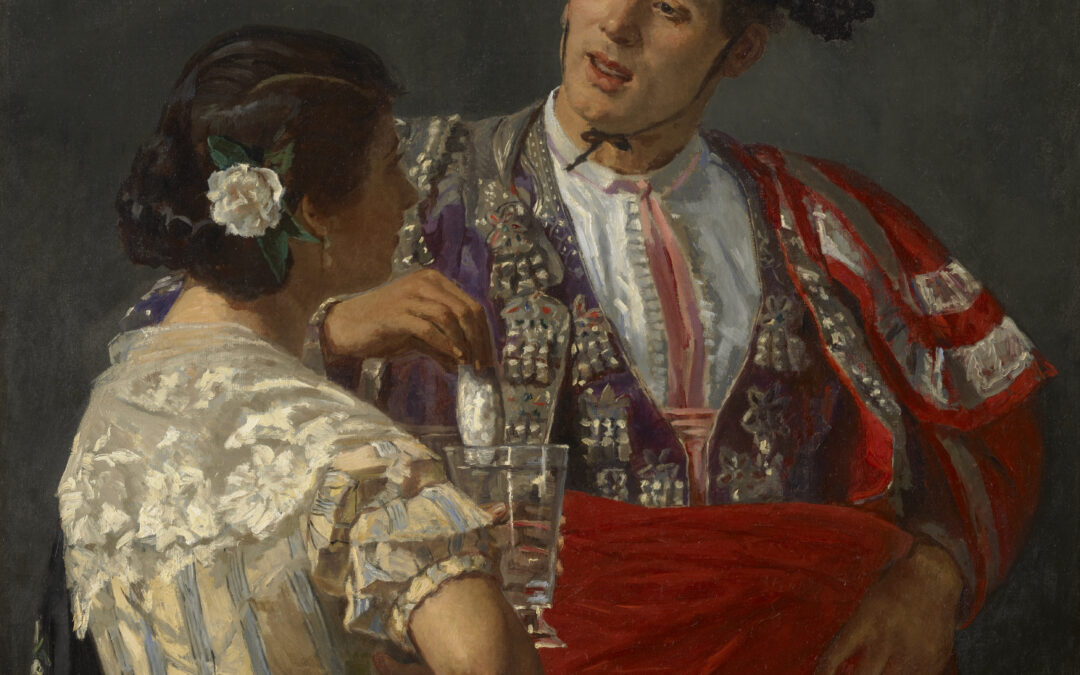 (Mary Cassatt, Offering the Panal to the Bullfighter, 1873, oil on canvas, On loan from Sterling & Francine Clark Art Institute)

Though most of us aren’t going much of anywhere right now, you can take the Grand Tour to Spain by way of Norfolk thanks to the Chrysler Museum of Art’s current exhibition, Americans in Spain.  Co-curated by Corey Piper, Brock Curator of American Art, at the Chrysler and Brandon Ruud, Abert Family Curator of American Art, Milwaukee Art Museum, the exhibition features over 70 paintings by beloved artists from Mary Cassatt to John Singer Sargent alongside their Spanish contemporaries.  Recently, Piper sat down to answer a few questions for VEER readers.

Betsy DiJulio: Corey, let’s begin at the beginning: how did this show come about?

Corey Piper: The exhibition grew out of the Chrysler’s efforts to present ambitious and groundbreaking exhibitions that advance scholarship in the field, bring great works of art to our community, and tell compelling new stories about the history of art. One story of American art that had largely been overlooked was the important role that travel to Spain and encounters with Spanish art and culture played in shaping the course of American art. We spent several years researching and planning for the exhibition and partnered with colleagues at the Milwaukee Art Museum to bring the project to life.

BD: How does this show relate to the Chrysler’s collection and mission?

CP: The Chrysler has fantastic and rich collections of American and European paintings from this period, many of which give insight into the importance of exchange between Europe and the United States. However, when we embarked on this project there were few works of art that illuminated points of contact between the United States and Spain. So the exhibition offers a way to share fuller and richer histories that we aren’t able to explore through our permanent collection alone. The exhibition serves our mission of bringing art and people together by not only bringing great masterpieces from across the globe to share with our audience, but also placing the Chrysler as a center of scholarship and new discoveries within the field.

BD:  What are the high points that visitors to the exhibition can expect to see and to learn?

CP: There are so many high points it is hard to pick just a few. One important story in the exhibition is the importance of study at Madrid’s Prado Museum for American painters and we are very fortunate to have fantastic examples on loan from the Prado’s collection of the 17th-century Spanish paintings that drew so many American travelers. The exhibition also offers new insights into familiar artists like Mary Cassatt who had a pivotal early experience in Spain, where she spent several months painting local models, as she was just gaining command of her style and approach to painting. Another particularly exciting pairing are the dueling portraits created by American painters William Merritt Chase and John Singer Sargent of the Spanish dancer Carmen Dauset Moreno, better known by her stage name Carmencita, who garnered international acclaim and toured the United States toward the end of the 19th century.

BD:  Are there some under-the-surface topics that visitors will encounter?

CP:  A key story told through the exhibition is the way that images and text shaped the experience of travelers, both artists and tourists alike. This story is told by including examples of 19th-century travel guides as well as photographs that would have circulated more widely outside of Spain. The exhibition and catalogue explore the ways in which all of these sources shaped the experience of artists who traveled to Spain, by guiding the sites they visited and even the way they pictured places like Granada’s famous Alhambra once they arrived.

BD:  Will you share a bit about the Grand Tour and whether there is an equivalent today…or should be, that is, when it is safe to travel again?

CP: The Grand Tour was a phenomenon experienced by wealthy European men, beginning in the 18th century, in which they would travel throughout Europe, usually with Italy as the ultimate destination. The goal was to experience great art works and other cultural experiences along the way. In the 19th century, as travel became easier the geographic scope of the tour expanded to include places like Spain, but also North Africa and the Middle East. I am not entirely sure whether there is an equivalent today, or if there should be. For many 21st- century travelers, the entire globe beckons, and Europe doesn’t maintain the same claims to cultural primacy or relevance. Today there are centers of art and culture across all the continents that have never been more accessible, and I think people are able to seek out experiences and art that resonates and challenges their own expectations and worldview.

BD:  From your perspective, what does this show contribute to curatorship and scholarship related to both American and Spanish art, culture, and politics of this time period?

CP: The story of American artists’ fascination with Spain has rarely been looked at as such a wide-ranging and interconnected phenomenon and I hope that this exhibition offers a new way of thinking about patterns of influence and exchange during this period of American art history. I think it also contributes a great deal to our understanding of the ways in which travel is primarily a visual experience, which is recorded and fueled by art as well as photographs, illustrations, and other popular imagery.

BD: Beyond academic significance, what in the show will delight visitors and bring them joy, since we could all probably use a little more joy against the backdrop of Covid Fatigue?

CP: I hope that the exhibition offers those longing to travel the chance to do so vicariously by following the American painters who visited some of the most picturesque sites in Spain in cities like Granada, Cordova, Seville, and captured their delightful impressions of these places in beautiful works of art. The exhibition also showcases artists like John Singer Sargent, William Merritt Chase and Robert Henri, who cultivated techniques of great painterly flourish. These captivating achievements of artistic bravado offer a moment of respite and enjoyment in spending time with great works of art.

BD:  Along those lines, will you tell us about a favorite piece from the show and why it special to you?

CP: This is so hard to pick just one, but certainly among my favorite paintings to just spend time with is Robert Frederick Blum’s Spanish Courtyard. These types of spaces were popular subjects for American painters and you can really see why. The semi-secluded space, full of lush plants, flowing water, and seemingly endless visual delights, seems like the perfect place to spend an afternoon or two.

CP: We are really thrilled to be able to welcome visitors to the Chrysler and are committed to making it a safe and welcoming space. If people are comfortable, I hope they will be able to visit in person, but we also have many online offerings, including virtual lectures, a Spanish guitar concert series and a virtual exhibition walk through.