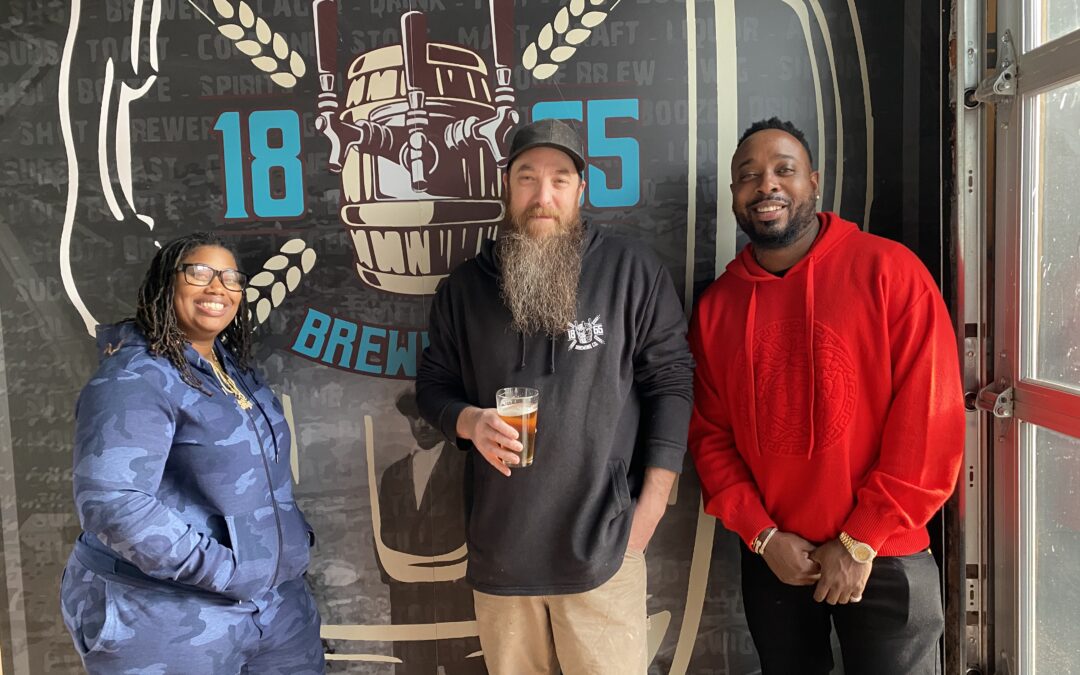 The Phoebus section of Hampton oozes charm. Cruise down Mellen Street at the intersection with Mallory and you get the feel of a classic small-town American main street. Theater? Check. The American Theater is a treasure. Local restaurants? Check. Several well-regarded locally-owned restaurants and bistros catering to a range of tastes are chock-a-block. Antiques and collectibles? Check. Bookstore, boutique, and bike shop? Check, check and check. Live local music shows in a cool Victorian House? Big Pink Music at Victorian Station is a few blocks down Mallory. Phoebus is so “apple-pie Americana” there is even a cidery, for goodness sakes! But, something is missing.

Where can you find the soul of any vibrant American burg, city or town in 2021? Readers of Veer Magazine know. The soul of any town, anywhere, can be found in its brewery! A brewery tasting room is a casual place to meet people and sip a cool one, a place to chew the fat and sample the very soul of the community. And Phoebus, finally, will soon have a brewery to call its very own. Not only is 1865 Brewing Company the first Black-owned brewery in Hampton Roads, it is the first in Virginia and one of only about 60 in the United States. The name derives from the deep roots of African American history in Hampton and historic Fort Monroe, just over a mile down the street. The Thirteenth Amendment to the U.S. Constitution abolished slavery in 1865. The brewery name represents freedom, their motto is “Freedom Starts Here,” and one of their first brews will be Freedom IPA.

Of course, the people make the place, so here is a bit of information about the founders of 1865. William “Billy” Comer is a successful Class A contractor who specializes in commercial and residential construction. A guy with a solid appreciation for IPAs, Billy is from Chesapeake, and  is converting the storefront into an industrial-chic tasting room. Whitteney Guyton is an energetic entrepreneur and a health care CEO. She’s a homebrewer, hails from Chicago, and is a proud Norfolk State alumna. Behold the green (hops) and gold (golden ale) from a pint glass at 1865. While Billy and Whitteney met over business regarding an earlier project, their common interests soon had them brewing up a business plan to build 1865. They formed a business partnership that brings their complimentary skills to the table, building 1865 Brewing Company in a classic storefront building located at 9 South Mallory Street in the Phoebus section of Hampton, VA, just off the intersection with E. Mellen.

So you’ve got two people who are building a brewery, but to bring beer to the table you need a brewer. Enter Randy Jones. Actually, he was already there. Randy and his wife Becca Jones, who some of us remember from the Taphouse Grill in Ghent, were partners in an earlier plan for a different brewery in the same building. It’s not like the brewer conveyed with the building, but when Whitteney and Billy took on the 1865 project, they were wise to tap Randy, who has a degree from the Siebel Institute and has brewed at Colorado’s Palisade Brewing Company and Black Sky Brewery. They all want 1865 Brewing to be a warm, welcoming location and community space where people new to the craft beer scene can relax, inhale an ale, and get a beer education without a lecture.

African Americans are vastly underrepresented in the American craft beer culture in terms of ownership, employees, and customer base. Whitteney and Billy are part of the changing craft beer landscape and aim to be a place where everyone feels welcome when they walk in the door.

Fewer than 1% of U.S. craft breweries are Black-owned, about 60 nationwide, and 89% of American craft brewers are White, according to a 2019 Brewers Association survey. Garrett Oliver of Brooklyn Brewing recently told the NY Times that in thirty years as Brewmaster at this major craft brewery, he did not have a single African American applicant for a brewing position. Considering that Garrett Oliver is American’s best known African American Brewmaster and the current brewery in Brooklyn, this is a strong sign that the craft beer industry thirsts for an infusion of inclusion!

And, how about the craft beer consumer? According to the Brewers Association, about 85% of craft beer drinkers are White. That remaining 15% includes Black, Latino, Asian American, and Native American consumers. Clearly expanding the craft beer consumer base to those who have not traditionally felt that craft beer includes people like them will be a boon to all. Some say the craft beer market is “saturated” but there are communities of color that are as yet largely untapped by craft beer culture. Whitteney describes how it is not unusual for a group of Black patrons to get “the look” when they walk into a tasting room and get the sense that they are viewed as outsiders. They envision 1865’s tasting room as a place where everyone will be greeted in a friendly fashion and made to feel at home.

Increasing diversity is a craft beer industry goal and change is happening, albeit slowly. Garrett Oliver recently founded the Michael James Jackson Foundation for Brewing and Distilling, a scholarship program for Black, Indigenous, and people of color in the industry. The Brewers Association hired a diversity ambassador in 2018, Dr. J. Nikol Jackson-Beckham,

a professor at Lynchburg’s Randolph College. The Brewers Association also publishes a set of Diversity Best Practices that is a valuable resource for all breweries looking to diversify both staff and customer-base and promote an atmosphere of inclusion. Black Brew Culture, an online magazine and Facebook group, the Black Brew Movement, and beer journalist-blogger Ale Sharpton are but a few examples of the grassroots movement that is connecting African Americans with the craft beer subculture. Fresh Fest, a Pittsburgh-based beer festival promoting Black-owned breweries, is another example of the changing landscape of craft beer. Weathered Souls Brewing of San Antonio developed a recipe and label for Black is Beautiful stout, brewed in 2020 at craft breweries around the nation, to raise awareness of systemic racism. We tried five of the eight local versions, and all were outstanding. Proceeds went to social justice causes chosen by each brewery. Beer brings people together!

When we visited 1856 Brewing Company in early January 2021, construction of the brewery was ongoing in earnest, and one had to use imagination to fully picture what the place will look like when the dust has settled. The brewery is a small, nimble three-barrel system with four fermenters and three brite tanks just off the 70-person capacity tasting room. There are plans to take advantage of the great outdoors by building a two-tier deck behind the building. Like most small breweries their opening date has been pushed back a few times due to both logistical issues and the COVID-19 pandemic, so while they would like to open by the end of January, it may take longer. Once they do open to the public they will have the capacity to serve six beers on tap, eventually expanding the beer list to 12 offerings. Yes, Virginia, they will have an IPA, a stout, and a golden ale which we tasted during out visit (it was delicious). They plan to brew what customers want and to listen to customer feedback. Inspired by the Emancipation Oak located just down the street at Hampton University, there may be an oak-aged firkin in 1865’s future. Of course any such oak would be from a different tree, sustainably and inspirationally harvested from the ground after a storm.

The tasting room at 1865 will also serve seltzers, both hard and alcohol-free versions, with some loaded with fresh fruit. Juices and alcohol-free offerings will be part of their inclusive outlook. Happily, 1865 will offer flights as well as full sized pours. Plans include baked goods from a nearby bistro, food trucks, and music. Easy and convenient free parking can be found in the city lot behind the building.