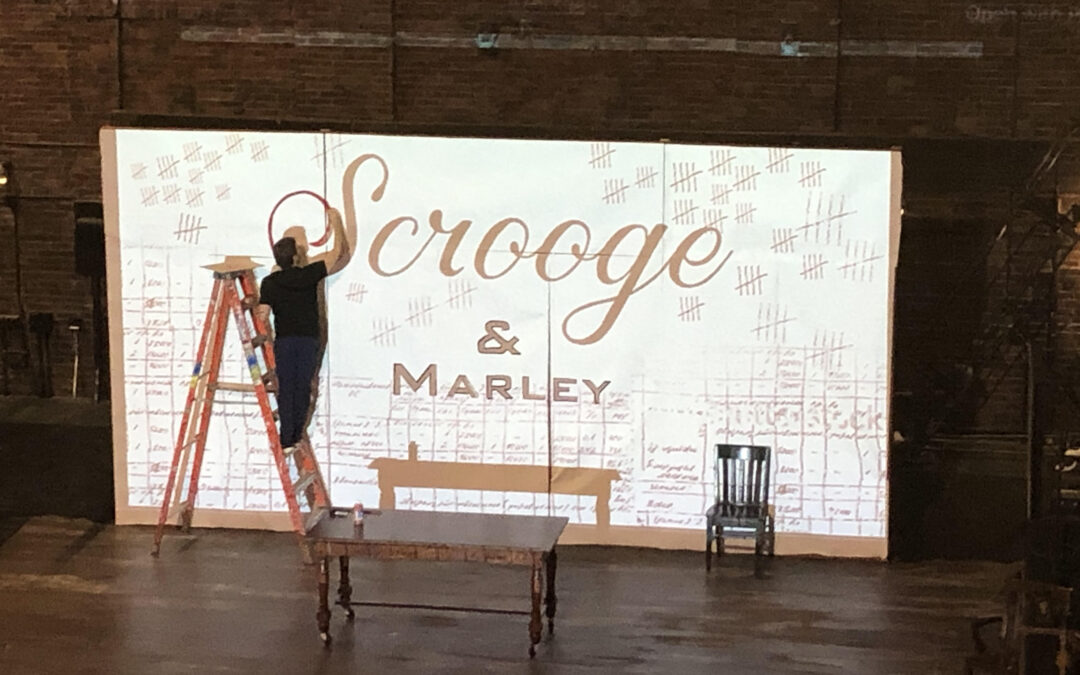 Sorry, Mr. Scrooge, but humbuggery won’t entirely dampen Christmas this year if the Virginia Stage Company has a say in the matter. And it seems they do.

From December 16-24, the professional theater company will present a more minimalist version of its annual tradition, Charles Dickens’ “A Christmas Carol.”

While the set designs will be less elaborate and not as fantastically Victorian in aesthetics for 2020, the use of effective lighting, traditional costuming and a reduced cast of four will allow the storytelling to shine, arguably, more clearly than ever.

“I think that simpler and cleaner is better,” said director/adaptor Patrick Mullins. “If you are meeting the audience where they are and tell the story cleanly then that does the work. It’s more direct.”

Joining Mullins, who will also play the lead role as Scrooge, are ensemble actors Meredith Noel (an alumna of Norfolk State University) and Ryan Clemens (a regular VSC performer). Both Noel and Clemens are true theatrical talents. Noel’s acting credits include performing in the VSC’s presentation of “A Raisin in the Sun,” “The Wiz” and “The Hampton Years,” while Clemens appeared on stage in the roles of Lt. Brannigan in “Guys & Dolls,” Mr. Wormwood in “Matilda,” and was a credible Jacob Marley and Bob Cratchit in previous versions of “A Christmas Carol.”

The fourth element in this production is the multi-talented Tyree Jones, a senior at Norfolk State University majoring in drama and theatre. Jones contributes as ensemble actor, pianist and music director.

On stage, the fantastic four cast members must remain 10 feet apart. In-person audience members will also have social distance protocols to adhere to.

Thanks to the generosity of presenting sponsor PNC Bank, admission fees are waived for Virginia Stage Company’s live, in-person performances between December 16-24 at the historic Wells Theatre. Theater-goers need only to register online at vastage.org for seating of 2, 4 or 6 persons. The maximum number of people allowed is capped at 150. There will also be an option to experience the play virtually December 21-31.

The new normal is what it is, and yet maintaining this annual tradition is something Virginia Stage Company felt was important to pursue.

“We have so many folks who come to ‘Christmas Carol’ every single year and it is a part of their holiday tradition,” said Mullins, who has been part of 14 productions of “A Christmas Carol.”  “We wanted to still be able to share that. It’s part of what we do being rooted in the community.”

Like everything in 2020, rehearsals have been a different sort of experience for the cast. Masks are worn and distance maintained. There are protocols on who can touch what stage prop and maintaining clean surfaces.

“It makes everything twice as laborious, but it’s also incredibly rewarding to be somewhere with people and creating something,” said Mullins.

“I think what I’ve realized in working on it this time is how much the story is about a person who is processing the trauma of his life and his life choices, and he’s processing all of that,” Mullins said of the famously fictional character, Ebenezer Scrooge. “Yet it is a ghost story but still a human life story.”

Mullins’ evolving takeaway from the meaning of the work is that people should continue to grow and learn as they get older instead of being stuck with all life’s trappings in the past.

Originally this “direct” version of “A Christmas Carol” was something the Stage Company thought it could tour around the region as a community event. The governor’s recent ban on public “gatherings” of more that 25 people put the brakes on that plan.

In the end, with the sight of the enormous scary puppetry of Future and the heartwarming conclusion of a seasonal favorite, this year’s production of “A Christmas Carol” is more important than ever — and the Wells Theatre is its perfect setting.