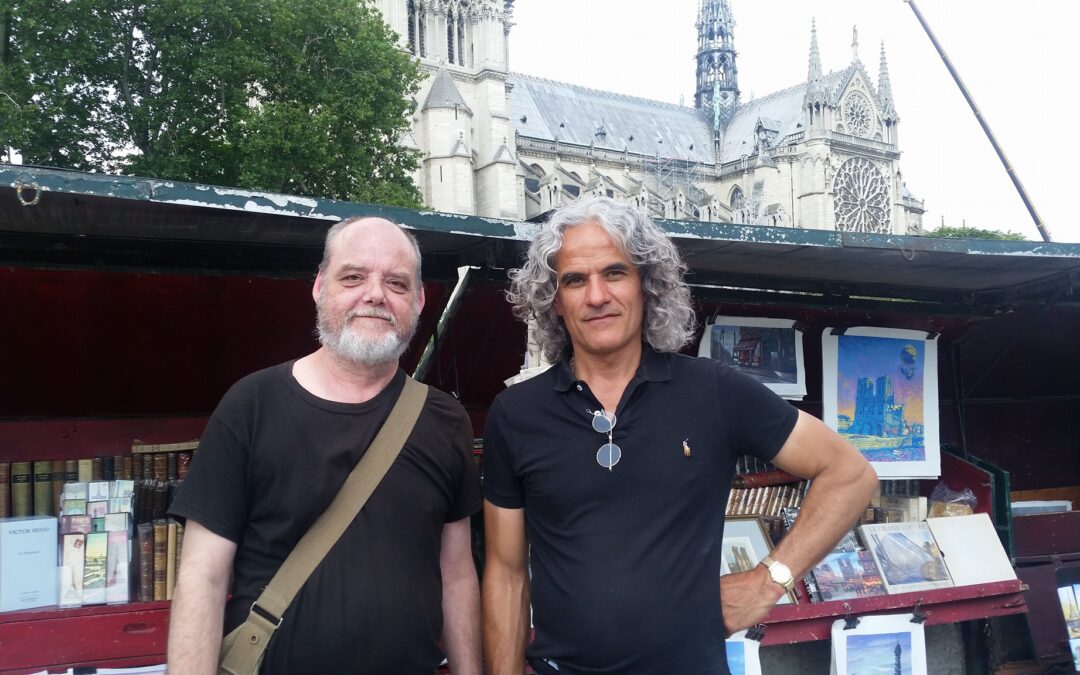 J’apprends Français. Well, a little bit each day at least.

I took two years of French in college, back when Gerald Ford was president, but over the decades I forgot most of it. When I went to Paris in 2017, I was inspired to pick it up again, and with the help of a good phrase book I learned a bit more. In cafes, I took pleasure in saying, l’addition, s’il vous plait when I wanted the check—although that was a double-edged sword. The first time I said it, the waiter’s face lit up—“Oh, you speak French!” he exclaimed. (Parisians seem to appreciate it when Americans at least make the effort.) I suppose I could have said oui, and hoped he would leave it at that. Instead I stuttered, “Um—not really.” He responded with a Mona-Lisa smile, which left me feeling a bit chastened.

At another café, I learned from a Parisian friend that de rien is ok—for, “you’re welcome”—but Je vous en prie is better. When I got back to my hotel, I used it in an exchange with the front-desk man, whom I’d gotten to know a little, and he said, “Ah, very good!”

After another trip to Paris the following year, I felt even more determined to learn French and began studying with an app called Duolingo. A couple weeks later, though, I got discouraged and gave up. I made it through each lesson easily enough, but nothing seemed to stick.

Then one day, about six months ago, I had an epiphany: I do a crossword puzzle every morning without expecting any “outcomes,” to use a term that’s become popular in education (and which I happened to despise). Why not complete a French lesson every day in the same spirit? Freed from the pressure of making demonstrable progress, I quickly established the habit—and I’m proud to say that as of this writing, I have done it for 155 days straight.

I say this not to brag, but because it’s caused me to reflect on how goal-oriented our society is—and how that often doesn’t serve us well. Take those “learning outcomes,” for example, which those of us in education are expected to measure with the same standards that factories use to measure production—as if students are widgets we’re churning out on some conveyor belt. Students, in turn, get caught up in this mindset, quickly picking up on the notion that the purpose of college is to clear a series of performance hurdles so they can get on with life in “the real word,” rather than to expand their minds and deepen their passion for thinking. For many students, this can suck the joy out of learning.

I realize, of course, that if we’re going to adhere to our current model of education, with its granting of degrees, there probably has to be some process of quantitative measurement. Still, it’s a shame that it’s become so oppressive—a shame not only because it actually undermines, to some extent, the spirit of higher education, but because it conditions us to think about all learning in this way.

WHILE REFLECTING ON THIS, I was reminded of one of the most engaging memoirs I’ve ever read: Practicing: A Musician’s Return to Music, by Glenn Kurtz. The book tells the story of Kurtz’s youth as a classical-guitar prodigy, his years at New England Conservatory—one of the finest music schools in the world—and his brief career as a performer. He then goes on to recount how, at the age of 25, he walked away from music entirely.

“The distance between where I was and where I wanted to be,” he writes, “was impossibly long. It sunk in that I wasn’t ever going to arrive, and so it suddenly felt like I was nowhere… . My fingers hadn’t failed me; my technique and talent were not to blame. I’d just imagined the artist’s life naively, childishly, with too much longing, too much poetry and innocence and purity. And this image ruined music for me. All my work had come to nothing.”

Kurtz became so disillusioned that he eventually locked his guitar in its case and left it there for a decade. Even looking at it brought forth feelings of disgust. Then one day, he picked it up again.

“I am sitting down to practice,” he writes. “I open the case and take out my instrument, a classical guitar made from the door of a Spanish church. I strike a tuning fork against my knee and hold it to my ear, then gently pluck an open string.”

As he turns each peg, he begins to savor the ritual. “It is an ancient, hopeful metaphor,” he writes, an instrument in tune, speaking of pleasure on earth and order in the cosmos, the fragility of beauty, and the quiver in our longing for love.”

The elegance of that passage, for me, lies in the ways in which it resonates with my own experiences. For the last 50 years, I’ve had an on-again-off-again relationship with the guitar myself. I’ve gone through spurts of playing regularly, then stopped for months at a time in the face of discouragement. And yet, there have been golden moments when I set all that aside and focused wholly on the simple pleasure of cradling the instrument, tuning it string by string, and playing a single chord. The ritual invariably leads to my playing a song, and then another—and in those moments I am in harmony with myself.

Kurtz’s meditation also reminds me of my intermittent engagements with Zen meditation over the years. When I began to explore it, in my early 20s, I was goal oriented—I wanted to become more centered, more relaxed, more focused. But I quickly learned from readings and conversations with Zen masters that this was the surest path to frustration. The key was to set aside all expectations of results and instead just sit and breathe.

I learned a similar lesson when I took up martial arts training at the age of 49. I was overweight and out of shape, and could barely get through the first class. The idea of getting a yellow belt—the first acknowledgment of achievement—seemed utterly out of reach. And yet, I continued to show up. As I let go of the idea of belt classifications, I began to cherish a ritual similar to the one Kurtz describes: putting on my gi, tying my white belt in the prescribed manner, bowing at the door of the dojang, and then walking onto the mat to begin pre-class warm-ups. Three years later, having settled into this state of mindfulness during each class, I found myself standing on the mat as my instructor tied my black belt around my waist. I was proud of that achievement, but it was of secondary importance. The simple pleasure of doing a basic kata or throwing a single, well-executed round kick into a heavy bag remained far more important.

And so it is, now, with my study of French. Do I still think about the pleasures I would derive from becoming fluent and conversing with a bookseller by the Seine or a waitress at my favorite café? Of course. But I try not to focus on that. Instead, I experience the way it feels each time I utter a phrase. Especially, Je suis—I am.

The older I get, the more I find myself approaching every aspect of my life this way. Regrets still creep in all too often, as I think about the gap between what might have been and what is. But as Kurtz reminds us in his final chapter, “Limitation is the condition of our lives.”

“What matters,” he writes, “what allows us to reach beyond ourselves as we are, and to push at the boundaries of our ability, is that we continue.”