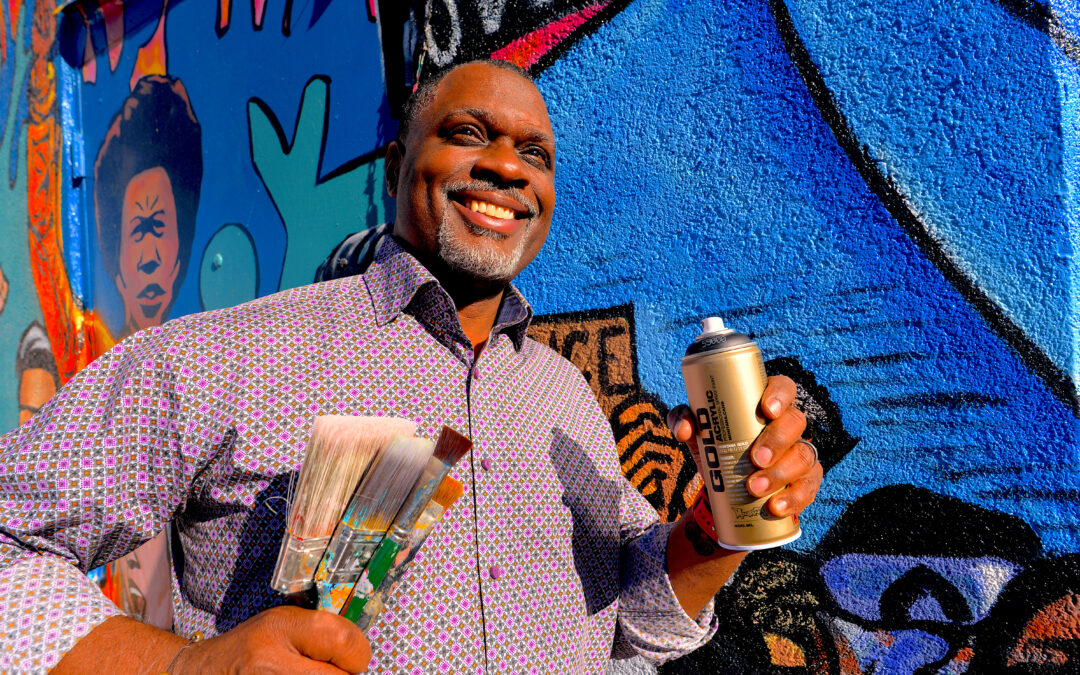 (MURAL, MURAL ON THE WALL: Artist Clayton Singleton stands with the Black Lives More Than Matter mural he collaborated on with Nicole Harp. Photo by Jeff Maisey)

Since the pandemic began in earnest, evenings and weekends have found Clayton Singleton, VEER Magazine’s recently named Mural Artist of the Year, lifted up…as in on an actual lift.  Since 2002, Singleton’s day job has been inspiring students and faculty alike as a beloved art teacher at Lake Taylor High School in Norfolk.  One of the most prolific artists in the area, Singleton has always used his time away from the classroom to create paintings and installations for galleries and museums, commissions and, more recently, a billboard.  Since March, his forays into public art have included the creation or co-creation of four murals in Norfolk and Virginia Beach, all of them with a message of empowerment—a frequent theme in his work–against the backdrop of protests and the pandemic.

Long affiliated with Teens with a Purpose, Singleton was invited by founder and executive director, Deirdre Love, to beautify with murals large storage containers on a plot now called Purpose Park.  Entitled Dream-Plan-Work-Work, the message is essentially, “You’ve got to have a plan and then work your ass off.”  The dream theme has been a touchstone of Singleton’s work at least since he titled his 2005 children’s book Dream an Awesome Dream.

Hence, when he was approached by Kate Pittman, executive director of ViBe, a 4 x 8” blank slate on Mediterranean Avenue was soon graced with a young black girl blowing a dandelion, Adinkra symbols in the background, and the words “Dream an Awesome Dream.”  Explains Singleton, “You can’t just deal with your past…building a life is like building a house…where and how do I want to live?”  As a child, he blew dandelions in his grandmother’s yard, chasing the seeds carried on the wind.  As an adult, he uses that visual as a metaphor for “beautiful things emerging from what we call weeds” or, more broadly, finding beauty in unlikely places.

But Pittman had more in store in the form of a project for Virginia Museum of Contemporary Art (MOCA).  An arranged collaboration with Josh Wade resulted in the “Unity” mural on the façade of the museum.   The creation and installation of the mural coincided with MOCA’s exhibition “Shifting Gaze” of figurative work by major artists of color.   As Singleton explained, “We yelled outside what was going on inside…those folks inside are suffering.”

After “iterations, conversations, and drafts,” the two artists—Singleton dwelling more in the fine art world and Wade more in the realm of graphic design—arrived at a hybrid design of text and imagery.  The letters serve as a kind of proscenium through which actions related to each letter in the word “unity” are viewed.  From left to right, topics include education; debunking false narratives, lies and myths; effective policing within diverse communities; a loving stable, equitable society; top down voting; physical and visual protests; and framing a house—or a country—in a new way:  “hard hats…hard work…you might get hurt.”  Summarizing, Singleton says, “Our past determines the future, our social DNA…(you’ve go to be) foot-to-foot and face-to-face with people.”

Most recently, Singleton collaborated on Norfolk’s Black Lives More than Matter  mural with fellow teaching artist Nicole Harp and two NSU assistants (featured last month in VEER).  “Mattering is just the basics.  We are essential.”  And “We are black as described by white people.”

Here is where things get even more interesting…and more complex.  When asked about future projects, Singleton shared that he is one of 12 artists invited by MOCA to participate in Nourish.  His work will deal with food deserts that affect his friends and family members, but he faces—and has always faced—a dilemma of sorts.  “As soon as I put a black person in a painting, it is never a person, it is always a black person.”  He explains further, with an absence of malice but not passion, “Black people can’t have the human experience; they have to have the black experience.”

By way of example, he asked me to imagine two identical tennis ads, one with a white man sporting tennis attire, the other with a black man wearing exactly the same thing.  The first ad is seen as an ad featuring a “man,” the other as featuring a “black tennis player.”  But the dilemma for Singleton doesn’t end there.  As he says, “My work is not black enough because it is not slave ships and freedom trips.”

In response, I asked if he had ever thought about running for office.  His reply: “I’ve laughed about running for office.”  So, for now, Singleton will continue to engage with some of the most vexing issues of our day as an artist and, in January, as a curator.  Look for my review of Light from All Sides in next month’s VEER.  It is about music and it is about love says Singleton, “love of authenticity, love of community…”  Think of it as a jam session and Singleton as Quincy Jones.