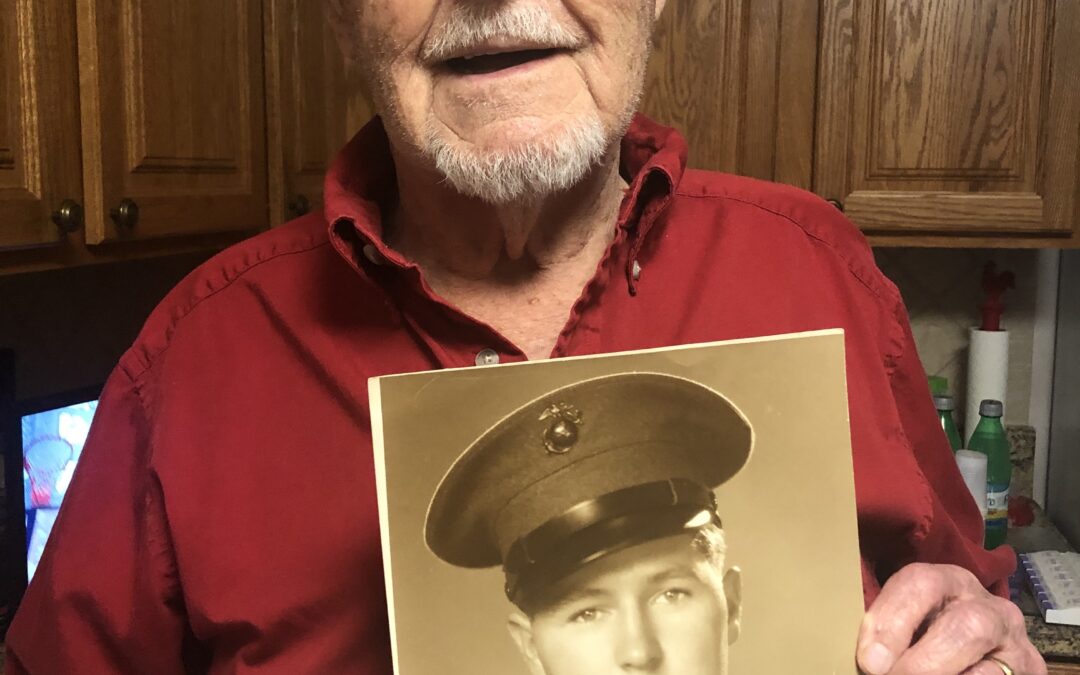 September 2 of this year commemorated the 75th Anniversary of V-J Day — Victory over Japan — marking the end to the Pacific theater of war and effectively bringing the horrors of World War II to a conclusion.

In August 1945, Crane, a Marine Corps Corporal with the 22nd Regiment, was stationed in the United States after seeing combat as an invading force in the Marshall Islands. He was scheduled to redeploy as part of America’s planned full-scale invasion of the Japanese mainland. The loss of life was anticipated to be extremely high.

“(President) Truman saved my life,” Crane recalled, “because it made me sick to my stomach to think we were going to be fighting women and children house-to-house in Japan. When I received word before we left the United States to go back out that the war was over I was quite thrilled.”

Gary Crane turned 18 years of age in 1943 and he used the occasion to join the US Marines. He was sent to Parris Island, South Carolina for 13 weeks of training before being shipped to the Pacific Ocean with the 22nd Marine Regiment.

Gary Crane’s description of participating in a sea-based invasion is something right out the movies. After a lengthy arial and battleship bombardment of the targeted Marshall Island, Crane and his fellow soldiers were ferried towards the shore aboard an Amphibious Landing Vehicle called an LCVP or Higgins boat.

The Marines had watched the ferocious bombardment where not even a palm leaf remained on the trees. This was encouraging at the time preceding the landing as they believed many of the enemy to be potentially incapacitated.

As the large front door opened and dropped into the still knee-high water, the Marines stormed the beach but were greeted by a hail storm of bullets and explosions.

“They were waiting for us,” said Crane. “I recall ducking and crawling. It was not pleasant. If anyone said they were not afraid, they were lying. The smell of burning flesh was terrible. I will never forget that.”

Crane said the Japanese had laid mines in the sand in anticipation of the invasion. They had also cut down coconut trees and lined the beach with them to impede tanks and other vehicles from easily maneuvering once on shore.

During the “softening” of the enemy by bombardment, apparently, the Japanese soldiers had retreated to underground tunnels.

“It made it very difficult for us,” said Crane, noting the Japanese would pop up out of a hole, engage in gun fire, and then retreat again underground.

The US Marine’s objective in taking this island was that it had an important air strip on it needed as a forward launching position.

Known as the Battle of Eniwetok, in the northwest part of the Marshall Islands, Crane and his fellow Marines took the island in six hours of intense combat on February 21, 1944. A total of 37 Americans were killed and 94 wounded. On the other side, 800 Japanese died and 23 were taken prisoner.

Crane and the 22nd Marines moved on to capture Kwajalein and Roi-Namur from March 7 to April 5, 1944. The 22nd was the first Marine Corps unit to employ fire team tactics in combat. Fire teams are cohesive four-person units — a team leader,  grenadier, automatic rifleman, and rifleman — acting as an organized unit with a specific mission.

Corporal Gary Crane was honorably discharged November 10, 1945 — the Marine Corps anniversary. That, too, was 75 years ago.