SURREAL: Pfac Goes Out on Top 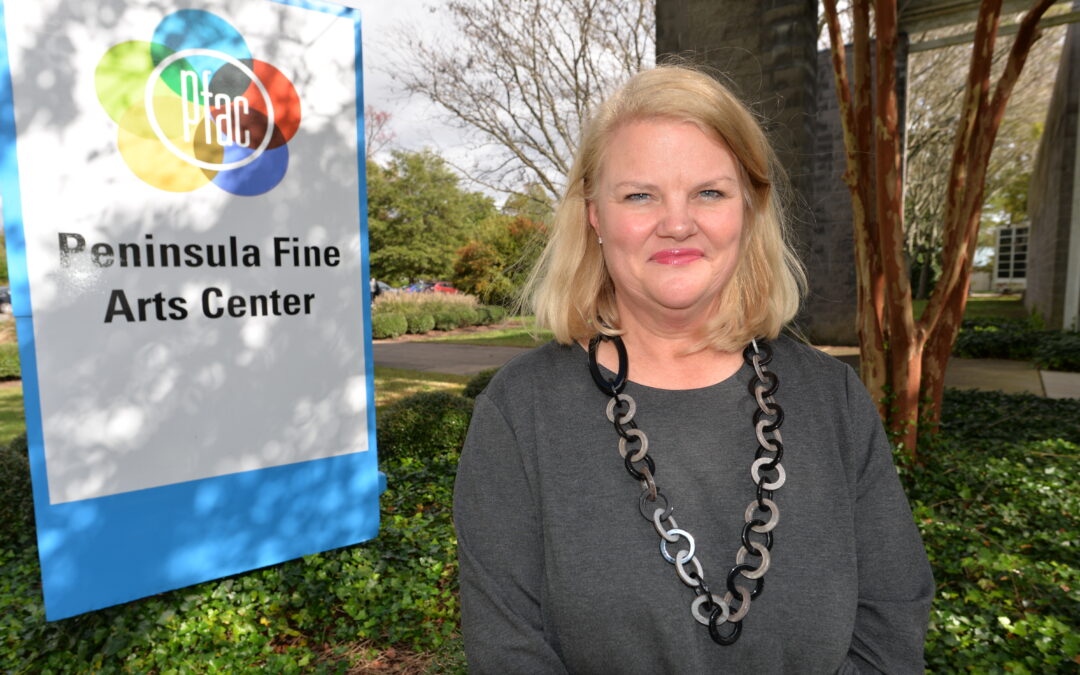 When the Peninsula Fine Arts Center (Pfac) presents Masters of Surrealism: Picasso, Dalí and Miró November 21 through December 20 it astonishingly marks the visual arts center’s first-ever exhibition of surrealism. Turns out it will be Pfac’s last — ever. After 58 years, Pfac will sadly shut its doors at the end of the year.

So how did it all begin?

In 1962 a group of local artists wanted a venue to exhibit art on the Peninsula. Agnes McMurran Johnson, a portrait artist, enlisted the support of her brother, Lewis Archer McMurran Jr., who worked as a state legislator in the Virginia General Assembly. He ultimately helped facilitate the establishment of the Peninsula Arts Association (PAA) as a chapter of the Virginia Museum of Fine Arts in Richmond.

Betty Anglin, an original Peninsula Arts Association member, was instrumental in making art education a priority for both children and adults. Art education has remained a core function of the organization ever since.

In 1978, after moving the PAA from location to location, a one-time hydraulics lab where testing for the Hoover Dam was done, was gifted, in 1973, by Newport News Shipbuilding to be converted into what would become the Peninsula Fine Arts Center in 1983.

Current Peninsula Fine Arts Center Executive Director Courtney Gardner marvels at the tenacity of the early founders and noted the Center has remained true to its early mission.

In 1993, Pfac made a bold statement when it was accredited by the American Alliance of Museums.

“When you receive that accreditation you really make the decision that you want to bring high value art to the local community,” Gardner said. “That really is what allowed us to bring the Wyeths, the Warhol, the Rembrandt, the Hudson River School, and all of these wonderful artists to this community.”

“Throughout its history, PFAC has sought to bring ambitious, world-class art exhibitions and experiences to the Peninsula,” Gardner continued. “We’ve explored art from nearly every era in art history, from ancient to contemporary, and we are so proud to finish our tenure checking one more era off our list with our first exhibition on surrealism.”

The Hampton Roads region is rich in visual art experiences for local residents as well as visitors to our region. These include the Chrysler Museum of Art, Virginia Museum of Contemporary Art (MOCA), the Barry Art Museum at ODU, Muscarelle Museum of Art at William & Mary, the Hermitage Museum & Gardens, and Charles Taylor Art Center. 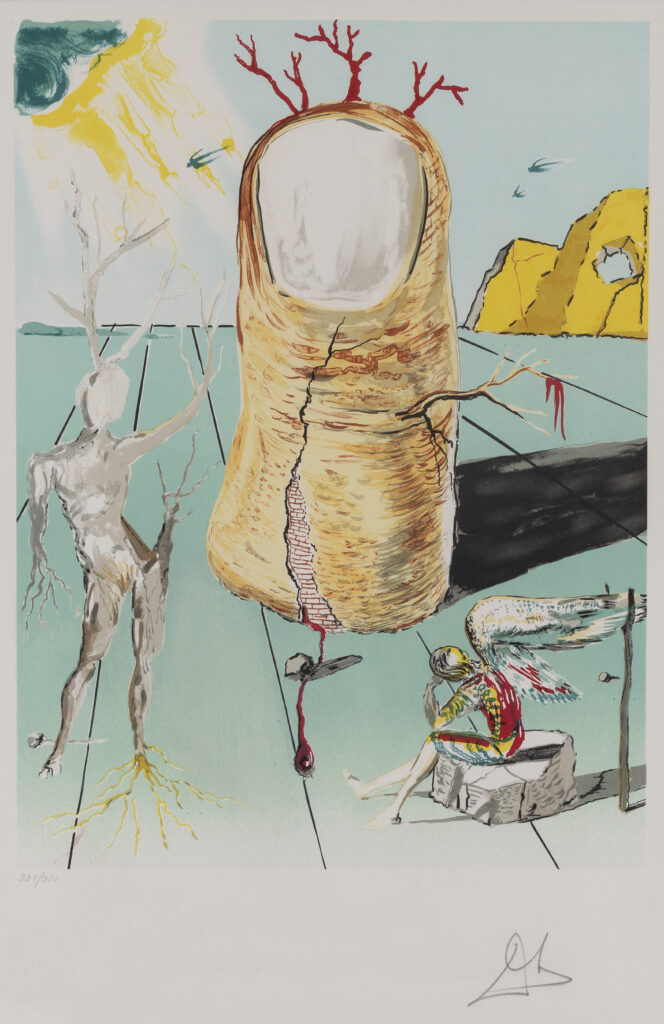 (Salvador Dali, The Thumb: The Vision of the Angel of Cap Creus is on exhibition at Pfac)

According to Gardner, the role of Pfac has been to compliment what the other museums were offering.

To Glen McClure, an internationally acclaimed photographer based in Norfolk who has exhibited at Pfac, the Center was unique in that it brought “an exciting wide range of exhibitions, such as the recent The Wyeths: Three Generations.”

McClure’s first association with Pfac was entering its Bi-Annual Exhibition.

“My last association was a solo exhibition there in 2017, Hardhat Heroes: Shipyard Workers of Hampton Roads,” said McClure.

McClure will remember the Peninsula Fine Arts Center this way: “To me, the legacy is the person I worked with many times, their curator Diana Blanchard Gross. She was excellent to work with. It was Diana’s idea to show my shipyard portrait exhibition at four regional museums concurrently here in Tidewater. Diana WAS the PFAC to me.”

“I attended my first art class since high school at PFAC in January 2003, at the tender age of 63,” said Dees. “It is there that I fell in love with watercolor and signed up for every class available from Phyllis Greenway, who became my mentor and dear friend and later moved to Vermont. I have had the honor of teaching watercolor and acrylic classes at PFAC for several years and truly consider it my artistic birthplace and home.”

Dees specifically shared his views on the importance of have such a high quality art center in Newport News.

“PFAC brought a true sense of creative community to the Peninsula, and it did so with a spirit of fun,” he said. “I will miss pushing my way through partying crowds on my way to teach Thursday evening art classes. I will especially miss warm greetings from the staff — Joan, Bronwyn, Lynnette, Fred and Courtney — and the terrific students, who always kept me on my toes and dazzled me with their creativity.”

Jim Dees has participated in art shows and sold art through the Pfac gift shop. As for the legacy of Pfac, Dees put it this way: ”It was a true home to the arts — from highest-quality exhibits to a repertoire of diverse classes. It was the place on the Peninsula to celebrate the visual arts.”

Before the Peninsula Fine Arts Center is shuttered, it has a very important swan song to share when it presents Masters of Surrealism: Picasso, Dalí and Miró. The exhibition will feature more than 60 prints by surrealist luminaries, who sought to tap into the unconscious mind, presenting dreamlike visions in their own distinctive styles.

In the years following World War I, the surrealist artists pushed beyond depicting the landscapes, people and objects they encountered in real life. Inspired by the research of Sigmund Freud, they instead attempted to let their unconscious minds depict new realities, or as artist André Breton described in 1924, “a surreality.” Visitors to PFAC will see works on paper by the masters of the movement, including pieces by Salvador Dalí, Joan Miró, Pablo Picasso, Wifredo Lam and Roberto Matta.

The idea of “surreality” permeated art across media, crossing into film, photography and even children’s literature. The collection of prints by the masters will be complemented by Surrealism in Children’s Books, an exploration of how the surrealist movement shaped children’s books. Some of the most famous illustrators in children’s literature, such as Maurice Sendak and Dr. Seuss, embraced the surrealist ideas of inventing strange creatures or creating juxtapositions of uncommon imagery. Their illustrations, along with works by Brian Pinkney and Uri Shulevitz, will be on view.

As a compliment to the exhibition, Pfac will display the contemporary surrealist works of digital collage creator Janice Hathaway.

On the closure of Peninsula Fine Arts Center, Courtney Gardner offered this explanation: “Peninsula Fine Arts Center is not closing due to any financial reasons or anything related to Covid. We are one of those institutions, quite frankly, that is fortunate to have almost a half million dollars in cash reserves to get through what has been a very challenging time for the world.

“In 2013, we entered into what we thought at the time was a merger. It didn’t quite work out as we had envisioned, but we basically agreed to a dissolution of the Peninsula Fine Arts Center into joining into a potential partnership with Christopher Newport University. That has not worked out as we thought, though there is a beautiful facility being built on the campus and it will house a wonderful gallery and classrooms.

“We are happy that some fine arts center will still exist on the Peninsula.”

The Peninsula Fine Arts Center will be missed as will its staff. Thankfully it will go out in style with a must-see exhibition of surrealism. A perfect theme to close out 2020.