The Rebranding of St. George Beer 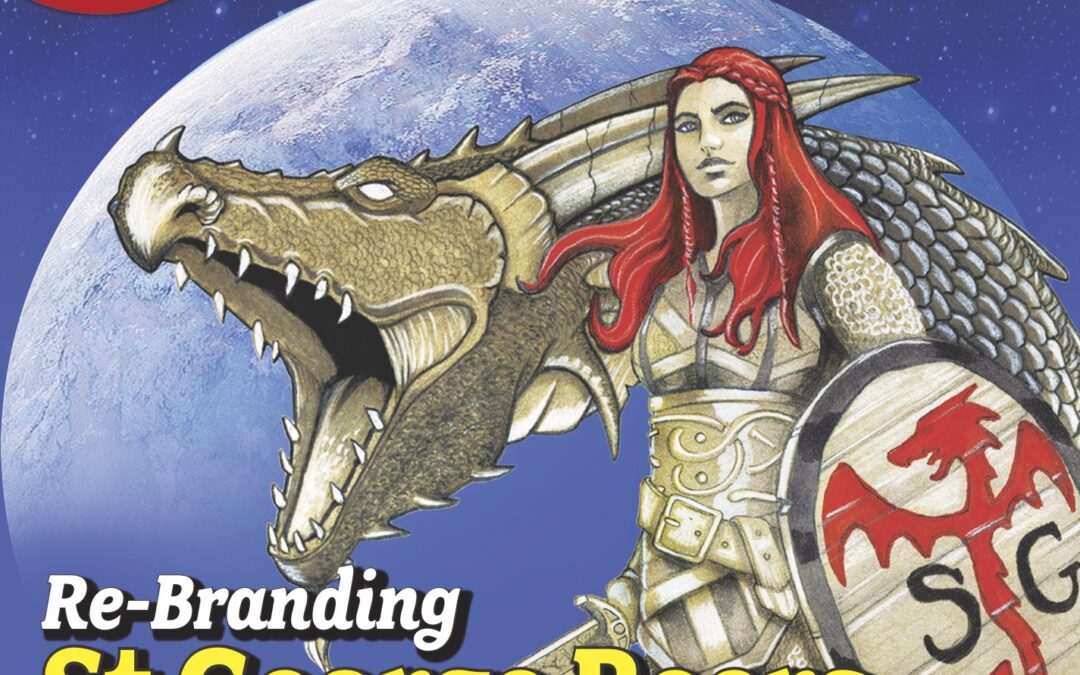 I’ve always been drawn to the imagery, symbolism and concept of St. George Brewing Company in Hampton.

From the prominent red cross on white background crest of St George and the weaponry of Medieval British warfare to the traditional styles of beers deployed to the frontline supermarket shelves like Nut Brown Ale, Porter, and English IPA, this craft brewery speaks to my soul.

Perhaps it is in my blood — primarily English and Scottish DNA — or because when I was a child while the other kids in the neighborhood were playing with green plastic army men or cowboys and Indians, I positioned silver-colored knights within a model castle encircled by barbaric Viking figurines armed with axes and spears.  Either way, I “get it.”

As legend would have it, St. George was a third century Greek-born Roman army soldier who slayed a ferocious fire-breathing, venom-spewing dragon in Libya, championed good over evil, and was decapitated — martyred — in the year 303. St George’s mythic stature was inspiration for crusading English kings of the 12th century, and yet his acts of chivalry are revered in both the Muslim and Christian worlds.

In Hampton, Virginia, he might as well be the patron saint of traditional, quality beer.

St. George Brewing Company is the oldest independent brewery in the 757 region, and, in fact, one of the longest operating in Virginia. Their motto: “Slaying ordinary beer since 1998.”

St. George was founded by William “Bill” Spence Sr. and brewmaster Andy Rathmann. In those long ago days of the so-called second wave of craft beer’s post-Prohibition Renaissance the goal was simply to produce a locally-brewed alternative to the big brewery lagers and market fresher beers than those imported from Europe. The beer styles, however, were hugely inspired by British ales and stouts, German lagers and wheats, Czech pilsners, and Irish red ales.

The original St George labels adorning its bottled beers resembled symbols on cards for a fantasy board game like Dungeons & Dragons.

“Starting out they were enamored with St George because of their desire to make these great true-to-style German and English-style beers, and kept the labels fairly simple,” explained Heather Gauthier, the brewery’s business and branding manager. “We were really one of the few breweries at the time; you’re talking 22 years ago when there wasn’t nearly the same competition level as there is now. They stuck with that theme and hadn’t changed that look.” 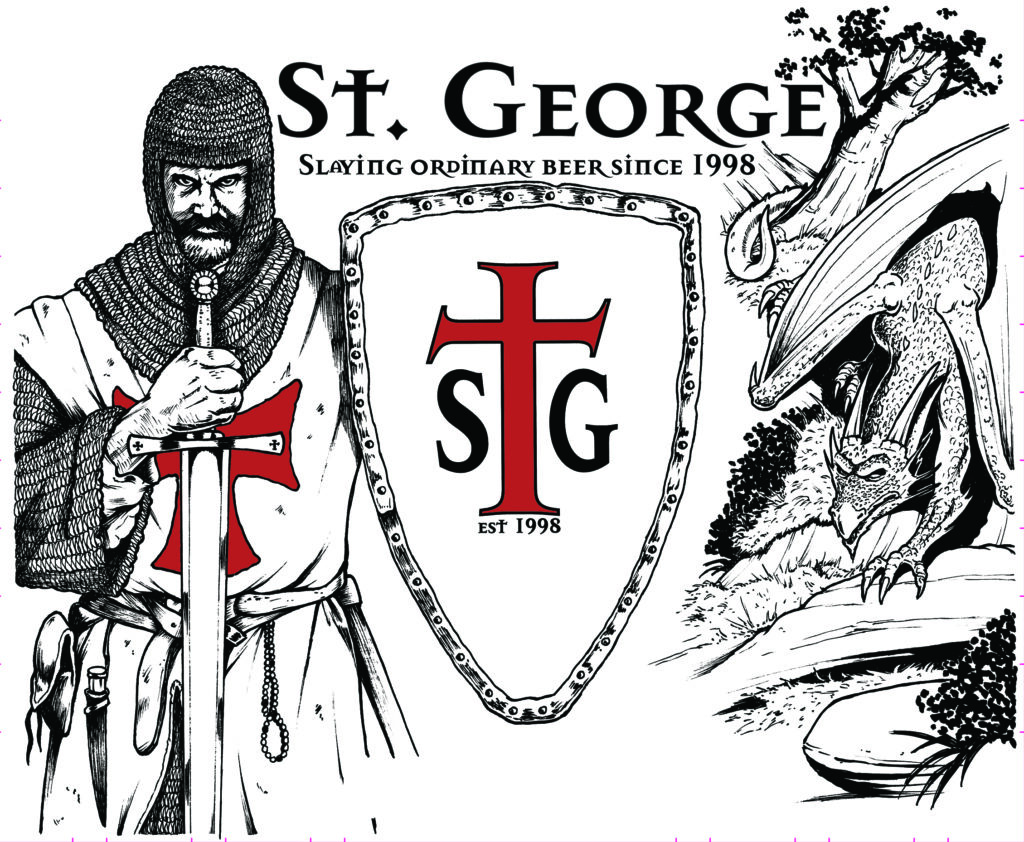 When Heather Gauthier joined the creative team at St. George, led by Billy Spence Jr., plans were being made for a rebranding effort that reinforced the brewery’s Medieval theme while appealing to longtime loyal fans and attracting new consumers. This was designed, as Gauthier put it, “to keep us relevant and remind people why they loved out beers.”

She continued, “When a scene becomes overwhelmed by so many breweries and consumers constantly looking for the new one, the ones that have been around a long time have to step it up a little bit and let people see something new so they remember who you are.”

St. George Brewing turned to a familiar face for art direction. Brian “Glad” Thomas, who excels in fantasy, horror and superhero-like illustrations, and who had created some designs for coasters and other merchandise for the brewery, was commissioned to produce the new labels.

Thomas chose black and white illustrated characters and forms and allowed the red cross of St George to pop and grab the attention of consumers’ eyes.

For the brewery’s core flagship bottled beers such as the Golden Ale, Pilsner, Porter, and the newer Knight’s Lager (Vienna lager style), the the shield with the St George logo is centered with a determined looking crusader knight grasping his broadsword. To the right of the shield is a menacing dragon preparing to pounce.

These core beers are packaged in six-pack bottles and also included in the Dragon Pack, which gives new customers a fun opportunity to enjoy several styles — variety.

Cans are new to St. George Brewing Company and the illustrations Brian Thomas created really hit the bullseye. The artwork is on a somewhat clear background wrap-around label that gives the entire can a sort of knight in shining armor appeal.

Hop Sentry IPA, for example, features a very detailed illustration of an armed and fully armored guard gazing ahead from a lofty stone Watch Tower as an in-flight dragon appears to be flying away from the imaginary castle. The knight is draped in a red sleeveless top and his shield baring the image of a hop.

The seasonal marzen known as the Oktoberfest beer is more celebratory with the extended arms of two armored knight’s hands thrusting their wooden mugs together — cheers — as beer sloshes over the top.

The Slumbering Dragon Scotch Ale, as you might expect, features a sleeping dragon with smoke smoldering out of its nostrils as his body is coiled around what appears to be a discarded knight’s shield. 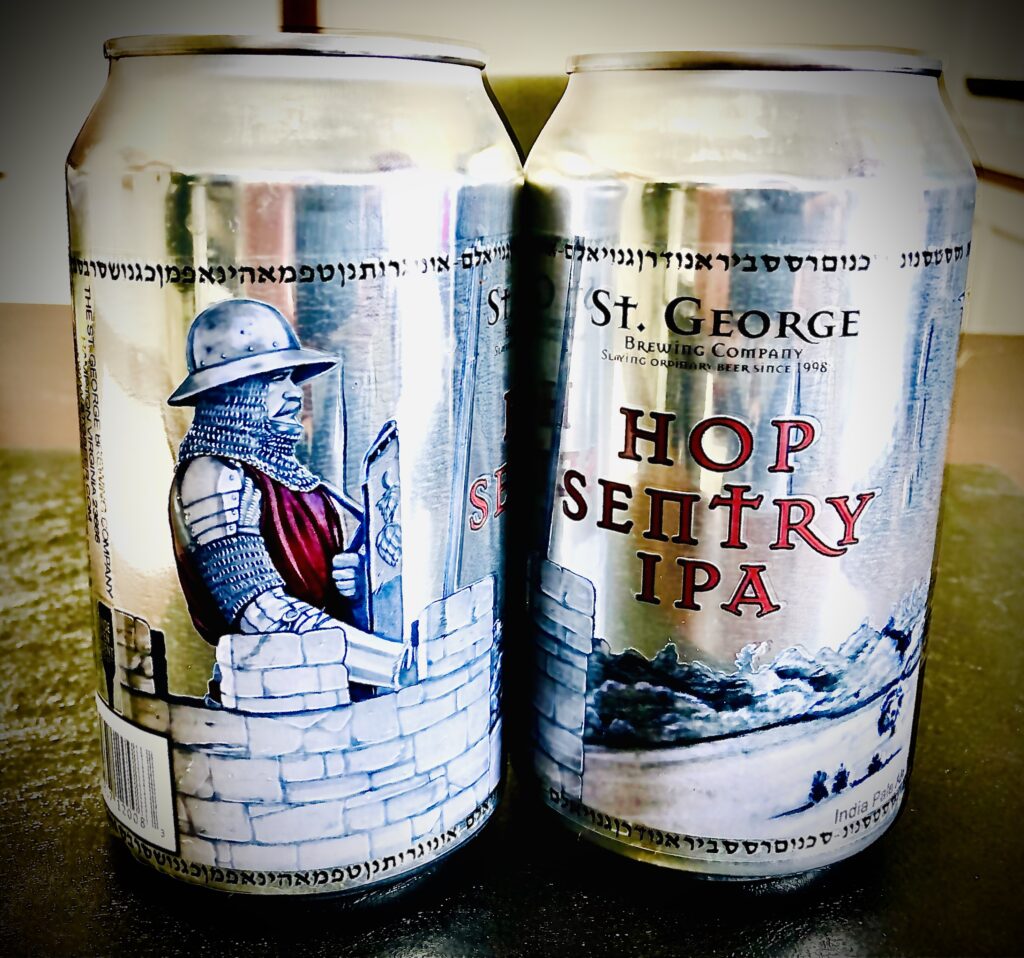 Dragon’s Maiden Wit (as seen on the cover of this magazine) illustrates a blazing red-haired armored woman warrior preparing to do battle. The female character featured in the artwork was purposely chosen as a nod to brewer Marie Miller who developed the recipe for the summer seasonal white ale.

“It was her first independent beer here,” said Heather Gauthier. “Her name on Instagram is actually Dragon Maiden so it’s sort of an ode to her.”

According to Gauthier, the cans have become so popular with some fans of the brewery they’ve become collector’s items, and that’s exactly what you want in a brand.