ODU School of Music Tunes in Despite COVID 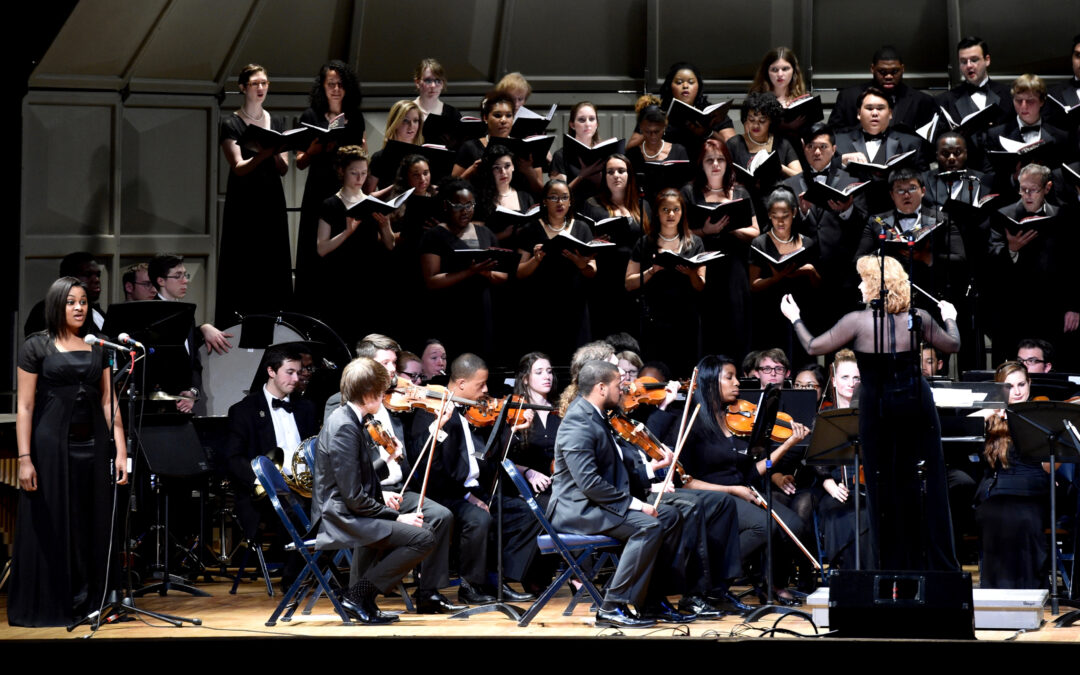 The effects of the COVID-19 pandemic hit ODU’s F. Ludwig Diehn School of Music last March, when this descendent of the University’s 62 year old Music Department was just 9 months into its newly matured form.

Nancy K. Klein, Ph.D., the School’s first Director and previously “interim” chair of its ancestral Department was on the administrative hot seat when, “about three days into Spring Break [2020], we were notified to prepare a COVID preparation plan.”.

Dr. Klein said, in one of several telephone interviews, that the prevailing, hopeful sentiment in the Music School, when word came to prepare the COVID plan was, “This is never going to happen.”

“We never came back from Spring Break.”

Students who had left things (such as instruments) in their lockers in the Diehn Center for the Performing Arts found the building closed to the public. They had to be contacted, access gained to their lockers, and their property returned to them outside the building.

In what could be called an encore to how Dr. Klein dealt with COVID presented problems, she borrowed a dozen electronic keyboards from Norfolk City Schools and personally delivered them to the homes of students so they could keep practicing.

“There was no template,” she said, no record of others’ prior experience in any similar situation.

Come Summer term, “Some courses were cancelled [but others} were switched to an online format that would work.”

As an example, Dr. Klein cited an advanced music literature course that normally required all the participants to read through – sing – important works, Instead, two male and two female singers, covering all the vocal parts, high and low, sang the required pieces for broadcast by Zoom with piano accompaniment. “The rest of the class had the music in packets. They were able to get the experience of the discussion. The class actually was successful.”

At the level of School Director or Chair (the ODU website used both terms for her) there’s lots more to do. Of course fundraising is a major duty, but, she also notes, “if a [water] pipe breaks at midnight, [I’m] the one who gets the call.”

When she got tapped to be an administrator, she had to pay attention to things that had “not been [her] job” as a Professor.

“Why in the world are we saving six, tube TVs?” she remembered musing. “We have got to put ourselves into the 21st Century….We upgraded the office, got new desks for the classrooms, repaired and painted classrooms.”

She’s become so well versed in the concept of “air exchange rates” – that is, room ventilation, or more precisely, the rates at which indoor air is replaced by outdoor air – which are especially important in the time of COVID  for determining how long and in what ways students can use any room, that she says “I feel like an HVAC expert.”

It’s not all cerebral. The School needed new shelving, and lots of it, for storage of instruments and other items. Rather than pay high prices for new stuff, Klein found a business that was closing and disposing of metal shelf units. On the morning of our first interview, she and husband Robert were “shleping 6 foot shelves into a [rented] panel truck.”

Now, as the Fall Term opens, some courses are being taught online, others “Either face to face with CDC guidelines or … hybrid, where half meet one day and the other half meet on the other day.”

For instrumentalists she arranged the purchase of “clarinet and oboe bags [and] bell covers for trombones trumpets and tubas, that block aerosol emissions.” Devices called Win-D-Fenders, originally meant to make flutes audible outdoors, redirect the flutists’ breath back to them and away from others.

Singers get special masks, designed for Broadway rehearsals, constructed so “that the jaw can drop and the mouth can open.” in fact, she points out, “Singers can hear themselves better with these masks.”

She’s prone to finding silver linings: Thanks to Zoom technology, she could include the adjunct (part time) faculty members for the first time in a faculty meeting, something she had long wanted to do,

She’s arranged for the purchase of 5700 sanitizing wipes, 9 gallons of hand disinfectant, 25 plexiglass face shields, and 65 electronic keyboards for students to use in virtual classes.

Practice rooms, where individual students work on their own, have been rebuilt and reassigned to take into account COVID concerns. For example, she explained, string players will not use the same rooms as tuba players.

Klein is quick, insistent even, about giving thanks to ODU’s administrators: Arts and Sciences Dean Kent Sandstrom, Provost Augustine O. Agho, and President John Broderick. “They have given us everything we asked for.”

She’s equally eager to call the 18 full-time and 44 adjunct music faculty members, “stellar,” a word she also applies to the students, whom she also calls “serious minded” and “excited to be making music again.”

Her gratitude especially goes out to the Hampton Roads Community Foundation’s F. Ludwig Diehn Fund, whose gift of $2.75 million enabled the Department to become one of only four named Schools of Music at state supported universities in Virginia.

Diehn was an international businessman whose career brought him to Norfolk, and a productive avocational composer with a European musical training whose first symphony was performed by the Dresden Philharmonic when he was 27, shortly before his family left Germany.

“His heart’s desire,” Klein said, “was to establish a top quality school of music at ODU.”

Asked about the advantages of being a School of Music, Klein explained “The first practical difference is that we’re eligible to apply for grants that we could not apply for as a department. The second practical reason is it gives us higher visibility as we recruit these students. We received additional scholarship [funding]; eight half -tuition scholarships that we did not have before. We can give them a half tuition scholarship for a full 4 years which helps us recruit high caliber students, and [helps] to provide scholarship support for talented students.”

She says that graduates of the Department have already begun contacting her to ask if they can say they graduated from Old Dominion’s School of Music.