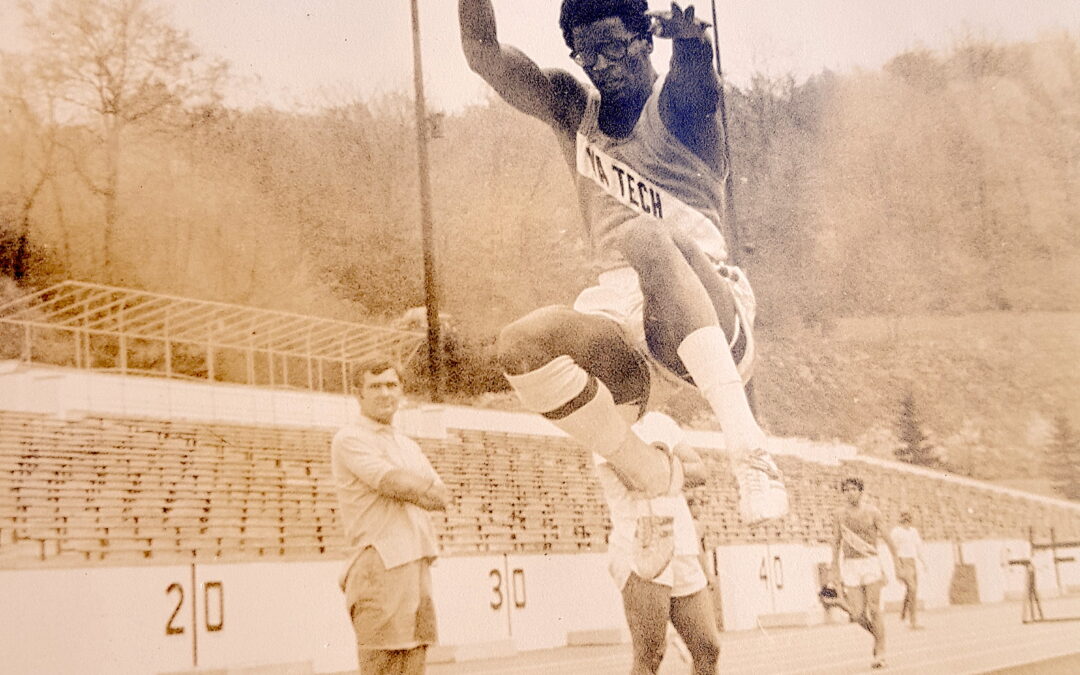 The circumstances across our nation being what they are, it seems appropriate to share this story now.  Back in 1967, I was the first black athlete to receive a full athletic scholarship to Virginia Tech – one of the last major universities in the state to integrate its athletics program.  In some aspects, it is not necessary to elaborate on the details of that experience; in others, there were interesting sidelights.

The university’s student body actually became integrated about a decade earlier, but back then, the black students were not allowed to live on campus.  Even when I arrived (and though they said it was completely random), those first black students always ended up rooming in the dorms with other black students.  At the time, there were perhaps twenty of us.

On such a large campus, it was easy to go for days without seeing another black student.  Being the first black athlete automatically meant being the only black athlete on campus.  We were housed in a dorm in the far corner of campus (away from the civilized student body).  Initially, those were some of the loneliest days of my life.  The next year, there was one black football player and one black basketball player, but because of our schedules (academic and athletic), we didn’t see each other very often either.

While I fully expected the treatment that I usually got from the white students and faculty, my personal battle was fought on TWO fronts.  The athletic department was overtly racist, and they didn’t mind letting me know that from the first day.  That meant several things.  For instance, one of the football team’s fight songs was “Dixie,” and while that infuriated most of the black students on campus (including me), it was clear to me that I had to play the “Jackie Robinson role” and deal with such things without “significant protest.”  If I was “too loud,” it would certainly have “seriously delayed” any interest at all in recruiting other black athletes.  In my sport, track & field, I had opportunities to compete against Olympic gold medalists and world and national record holders, but that was one of the biggest challenges I ever faced.  What was most hurtful, however, was when a small contingent of the small contingent of black students decided that I was not “black enough.”  Some labeled me an “Uncle Tom.”  They did not completely understand, and I could not properly explain.  They thought I should join the one campus fraternity for black students; they though I should aggressively protest the playing of that fight song, and while I so wanted to, the stronger desire was to preserve the opportunities for those I knew who were yet to come.  Eventually, they did:  Bruce Smith, Michael Vick, Del Curry (Stephen’s father), Bimbo Coles, and so many others.  Today, there are far more black football players than there were black students on campus during my freshman year.  Again, that was, without a doubt, the LONELIEST year of my life.

Dr. Jerry Gaines, a life-long educator, began his career in 1972 at Western Branch High School in Chesapeake, where he taught and coached for 21 years.  He spent the next 15 years as a high school assistant principal (three at the Chesapeake Center for Science and Technology, and 12 at Great Bridge High). Dr. Gaines is the author of “40 Stories High” and is chairman of the non-profit foundation, “My Brother’s Keeper – Not My Brother’s Killer,” which helps explain the “why’s” behind all types of conflict among human beings – an especially poignant message for these modern times.