A Family of Painters Shine at PFAC 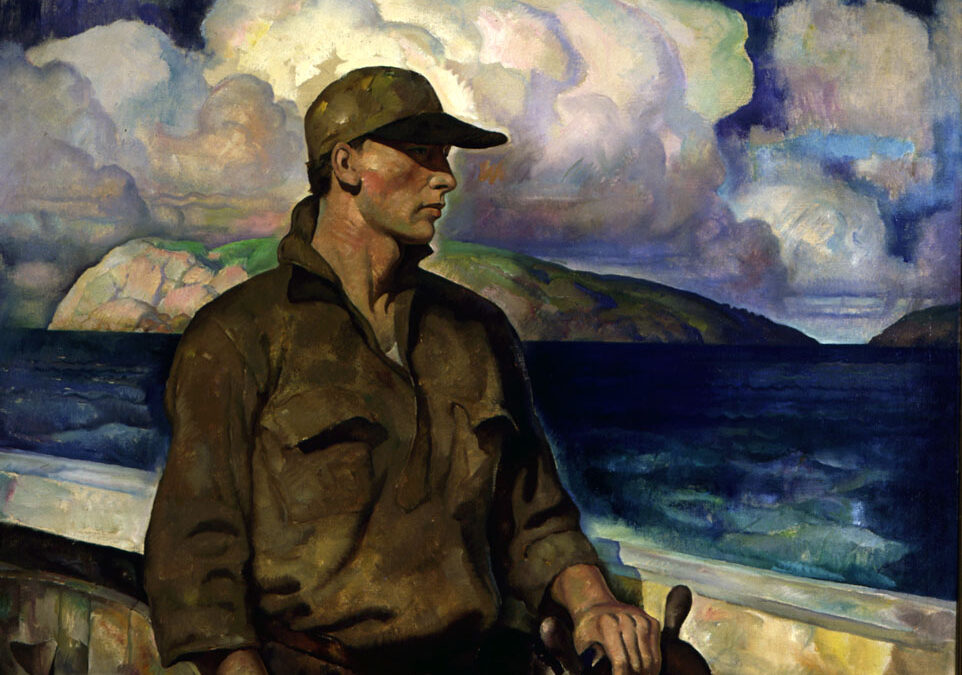 Since 2008, Bank of America’s Art in Our Communities program—just one of their many initiatives supporting the arts—has offered to museums and nonprofit galleries worldwide entire exhibitions from the Bank’s extensive and diverse art collection at no cost.  In a recent phone conversation, Kerry Miles, Art in Our Communities Program Director, shared that the Bank loans 12 to 15 major exhibitions each year and “tries to make it as turnkey as possible” by providing frequently updated labels, wall text, brochures, educators’ guides, docent guides, posters, and rack cards free of charge.  As one of the world’s largest financial institutions and a major arts and culture supporter, the Bank’s largess similarly covers crating, shipping, and insurance.

Based on a previous successful loan to the Peninsula Fine Arts Center (PFAC), the Bank was happy to loan The Wyeths: Three Generations.  Charlie Henderson, the Bank’s Hampton Roads Market President, says that one of the many benefits of this program is that it helps institutions generate revenue by charging admission to exhibitions with which few costs are associated.  This generosity has taken on even greater significance during the current Covid-19 pandemic as museums face the loss of revenue from facility rental, events, classes, and other programming.

According to Miles, museums are encouraged to install the exhibitions however they choose, saying, “We leave that level of creativity up to them.”  PFAC chose to devote each of three of their galleries to N.C., Andrew, and Jamie Wyeth, while inviting Ryan Lytle, Richmond-based artist and CNU adjunct art professor, to design a companion installation in the upper level gallery.

In the Ferguson Gallery, blurring the line between “illustrator” and “fine artist”—somewhat artificial constructs—are N. C. Wyeth’s oil paintings on canvas, along with a small number of oil paintings on hardboard which have a markedly different appearance, charcoal and graphite on paper, and printing plates.  Though, as the informative labels communicate, these early 20th century pieces were reproduced as illustrations for books and magazines like McCall’s, they represent an accomplished, and occasionally striking, approach to genre and narrative painting.

Overall, the paintings are notable for N.C.’s treatment of light, whether it is glinting off the buttons of an American naval commander’s uniform or reflecting off the facades of buildings.  One piece, in particular, Sir Nigel Sustains England’s Honor, pays a debt of gratitude to the Impressionists sense of light, color palette, and broken brushstroke, while another, We Rode Quietly Until the Suburbs Dropped Behind, incorporates a daring use of negative space.

Across the hall in the Ranhorne Gallery is work from the mid- to late-20th century by the youngest of N.C. and Carolyn’s five children, Andrew Wyeth.  With a markedly different and far more neutral color palette, these paintings feel quieter and perhaps more refined.  Among the examples of oil painting, watercolor, tempera, pencil on paper, and pen and ink, one of the finest examples is Antler Crown from 1988.

Wyeth’s wife, Betsy, purchased the caribou antlers which Andrew painting many times.  This large oil painting is a quintessential example of Wyeth’s ability to create a captivating, almost surreal, tension between exquisite realism of objects—the antlers suspended over a fur tree, architectural fragments, and a stark snowy landscape—a composition whose underlying framework is geometric and abstract, and an approach to asymmetrical balance this is somehow both arresting and subdued.

In the Ascending Gallery is largely the late 20th and early 21st century work of Jamie Wyeth, Andrew’s son, along with a small number of pieces by Henriette, the oldest child of N.C. and Carolyn, and her husband, Peter Hurd.  Jamie’s work appears the most experimental of all with an approach to color that is often surprising, ranging from the lush to the jolting and garish.  An especially powerful piece is a mixed-media painting entitled Patriot’s Barn from 2001, created not long after the four coordinated terrorist attacks of 9/11.  Seen by the artist on a country road in Delaware, the scene features a monumental American flag hanging on the side of a white farmhouse, the flag poignantly depicted as an inverted fragment reflected in a foreground pond.

Based on the children’s book Cabbages and Kings by Elizabeth Seabrook with illustrations by Jamie Wyeth, Lytle’s reinterpretation, in keeping with his ongoing interest in predator-prey interactions,  focuses on the relationship that develops between an asparagus named Albert and a cabbage named Herman in Farmer Green’s garden as they face a common enemy: rabbits.

Set against a swirling, almost woven looking backdrop painted in Lytle’s signature palette of cyan, magenta, and yellow against a dark violet background, a ring of nine large white rabbits encircle the asparagus and cabbage which sit on a handmade circular rug inspired by the moon’s reflection.  Rather than the translucent pink of the inside of white rabbits’ ears, Ryan repeated and alternated opaque cyan, magenta, and yellow.

The vegetables and rabbits began life as wire armatures which he stuffed with Poly-fill and wraps with yarn followed by wool roving which he then needle felts.  The process involves a repeated stabbing motion with a barbed felting needle that cause the fibers to interlock.  The end result is beautiful textures with a sense of movement across the surface that enhances the forms.  The overall effect of the installation is intentionally playful, “loud and bright.”  Though it is designed to engage people of all ages, the properly disinfected “Build Your Own Farm” felt board will appeal especially to children.

The Wyeths: Three Generations: Works from the Bank of America Collection