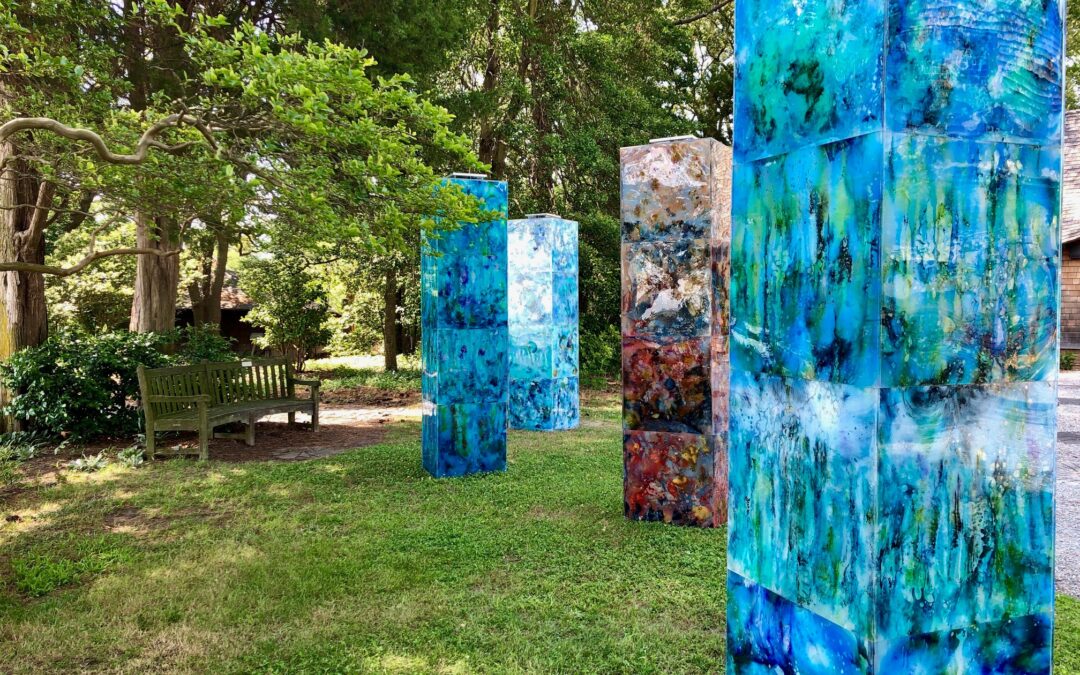 A year ago, as the Hermitage staff prepared for an August public forum announcing calls for proposals for their summer 2020 exhibition, Unknown Outcome, they had no idea just how prophetic that title would become.

Though it references human impact on the environment, the title now resonates against the backdrop of COVID-19 with sinister layers heretofore unimagined.   Still, the show is resolutely about the effects of sea level rise, climate change, water pollution and related topics given that experts predict that much of Norfolk, including The Hermitage Museum & Gardens, will be under water by the year 2100.

The twelve fully-funded exhibited works were chosen from some 50 proposals from individuals, pairs, and teams of artists throughout the region.  Situated both in the galleries and gardens, the projects are alternately absurd, satirical, ironic, contemplative, metaphorical, and highly conceptual.

“The Museum Tree” is Benvenuto’s and Stone’s striking visual response to the absurdity of elevating everything of value as a viable counterpoint to sea level rise.  Here, three paintings copied from the museum’s collection and five purchased objects representing the diverse cultures and religions in the Hermitage collection are suspended from the boughs of a live oak in neon-lit acrylic frames and Plexiglas vitrines.  Neon encircling the tree’s trunk changes colors to signify increasing depths.  There is something deeply resonate about the juxtaposition of the grand old oak, the manufactured components, the hand-made paintings, and the cultural and historical objects forged into an uneasy relationship.

Cathcart, a muralist and graphic designer, addresses the single-use plastics choking our oceans in “Symbolic Swim.” An accordion-folded mural in gorgeous oceanic colors seduces you to come closer.  Viewed from one side, the panels depict languid jellyfish drifting in the turquoise waters; viewed from the other, plastic shopping bags, strikingly similar in shape and movement; and, from the front, the two comingled.  And therein lies the problem:  sea turtles and other animals often mistake the plastic for tasty jellyfish.

In “Flight Path,” Britton and Saunders, previous collaborators, have created a lyrical and organic site-specific installation that takes a poetic look at the decline of bee populations and floral resources, yet is grounded in research.  Made of grape vine, real flowers, and woven copper wire, their wall-mounted design functions within the burgeoning world of graphic visualization to contrast “loop” and “zigzag” motifs that constitute the paths bees make on learning flights. Over time, the flowers will dry and wither and the copper will lose its shine as a symbolic parallel to the declines that inspired this piece.

In “One Foot Under”—a pun on “Six Feet Under”—Harp and Hughes offer a satirical response to nuisance flooding in modern life. Their suite of five large photographs depict people going about their daily routines—picnicking, grocery shopping, boarding the school bus—with a foot of water swirling around their shins.  Barnacles grow on dining table legs, fish dart between human legs, and children sport both backpacks and flotation devices.  Shot in the 757, the series draws upon photography, staging, and photo illustrator to create a compelling comic tension between realism and illustration.

Singree’s and Hunter’s room-size site-specific installation “Certainty” is an eerie visualization of sea level rise.  Intaglio prints of near-life size human figures standing with their backs to the viewer line three walls of the gallery.  Three Plexiglas hand-engraved drypoint plates from which the prints were made are suspended in the center of the room.  They create a kind of ghostly presence as the walls are slowly bathed, from top to bottom, with blue light as though the room is filling with water.  The deniers/ignorers/skeptics appear oblivious to their impending fate.

Space limitations preclude highlighting all the worthy pieces, some of which were included in our March preview.  However, the Hermitage grounds, especially, offer pleasant opportunities for social distance and close encounters with relevant works of contemporary art.  So plan a visit—but don your mask—because you will want to submerge yourself in the indoor work as well.